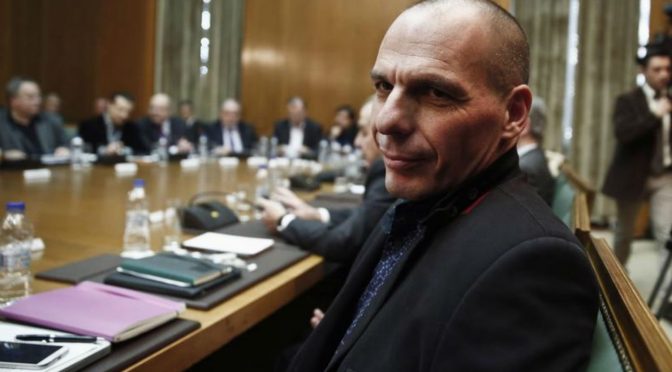 That’s Greece Finance Minister Yanis Varoufakis asking the hard question, and if you have read the article “Fiat Financial System’s Assured Collapse Sans Greek Contagion”, you will understand that the answer to that question is a big NO.

A monetary system is a system of control; a centralized monetary system is a centralized system of control over the population.
Democracy is one big lie because we didn’t start on equal footing. Some are already filthy rich, more educated and were already hacienderos, which means they can buy the inteligencia who will make up the government and call it whatever they want.
The Oligarchy knew beforehand that with the Sheeples given the right to vote, they can be swayed to according to the dictate of their own corporate  media. The mob mentality is always to their advantage. This is the principle behind the success of the color revolutions of the NGOs everywhere.
As far as the Greek situation is concern, no matter what their government do, no matter how many asses their officials lick into, the Troika will never make a deal with them. The main objective of the Troika at the moment is to remove the leftist Tsipras government from power so much so when it started cavorting with the Russians and the BRICS at large.
The embedded Troika agents are all waiting in the wings.

By Yanis
The Eurogroup Meeting of 27th June 2015 will not go down as a proud moment in Europe’s history. Ministers turned down the Greek government’s request that the Greek people should be granted a single week during which to deliver a Yes or No answer to the institutions’ proposals – proposals crucial for Greece’s future in the Eurozone. The very idea that a government would consult its people on a problematic proposal put to it by the institutions was treated with incomprehension and often with disdain bordering on contempt. I was even asked: “How do you expect common people to understand such complex issues?”. Indeed, democracy did not have a good day in yesterday’s Eurogroup meeting! But nor did European institutions. After our request was rejected, the Eurogroup President broke with the convention of unanimity (issuing a statement without my consent) and even took the dubious decision to convene a follow up meeting without the Greek minister, ostensibly to discuss the “next steps”.
Can democracy and a monetary union coexist? Or must one give way? This is the pivotal question that the Eurogroup has decided to answer by placing democracy in the too-hard basket. So far, one hopes. 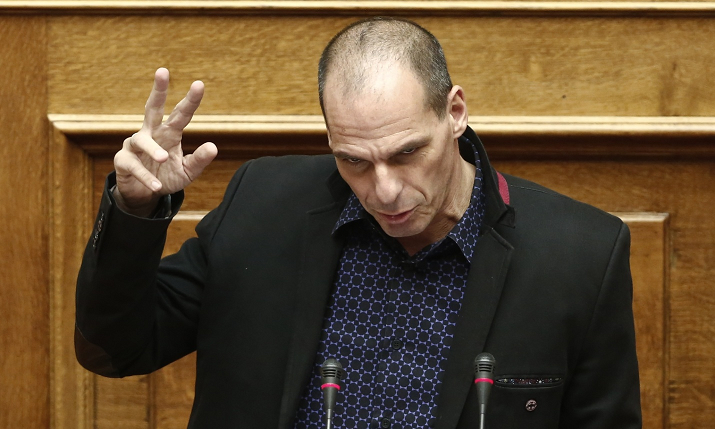 On the question that will be put to the Greek people, much has been said about what it should be. Many of you tell us, advise us, instruct us even, that we should make it a Yes or No question on the euro. Let me be clear on this. First, the question was formulated by the Cabinet and has just been passed through Parliament – and it is “Do you accept the institutions’ proposal as it was presented to us on 25th June in the Eurogroup?” This is the only pertinent question. If we had accepted that proposal two days ago, we would have had a deal. The Greek government is now asking the electorate to answer the question you put it to me Jeroen – especially when you said, and I quote, “you can consider this, if you wish, a take or leave it proposal”. Well, this is how we took it and we are now honouring the institutions and the Greek people by asking the latter to deliver a clear answer on the institutions’ proposal.
To those who say that, effectively, this is a referendum on the euro, my answer is: You may very well say this but I shall not comment. This is your judgement, your opinion, your interpretation. Not ours! There is a logic to your view but only if there is an implicit threat that a No from the Greek people to the institutions’ proposal will be followed up by moves to eject Greece, illegally, out of the euro. Such a threat would not be consistent with basic principles of European democratic governance and European Law.
To those who instruct us to phrase the referendum question as a euro-drachma dilemma, my answer is crystal clear: European Treaties make provisions for an exit from the EU. They do not make any provisions for an exit from the Eurozone. With good reason, of course, as the indivisibility of our Monetary Union is part of its raison d’ etre. To ask us to phrase the referendum question as a choice involving exit from the Eurozone is to ask us to violate EU Treaties and EU Law. I suggest to anyone who wants us, or anyone else, to hold a referendum on EMU membership to recommend a change in the Treaties. 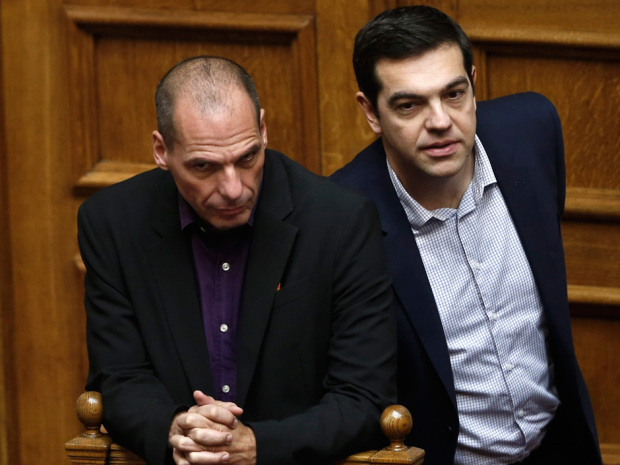 Colleagues,
It is time to take stock. The reason we find ourselves in the present conundrum is one: Our government’s primary proposal to you and the institutions, which I articulated here in the Eurogroup in my first ever intervention, was never taken seriously. It was the suggestion that common ground be created between the prevailing MoU and our new government’s program. For a fleeting moment, the 20th February Eurogroup statement raised the prospect of such common ground – as it made no reference to the MoU and concentrated on a new reform list by our government that would be put to the institutions.
Regrettably, immediately after the 20th of February the institutions, and most of colleagues in this room, sought to bring the MoU back to the centre, and to reduce our role in marginal changes within the MoU. It is as if we were told, to paraphrase Henry Ford, that we could have any reform list, any agreement, as long as it was the MoU. Common ground was thus sacrificed in favour of imposing upon our government a humiliating retreat. This is my view. But it is not important now. Now it is up to the Greek people to decide.
Our task, in today’s Eurogroup, ought to be to pave the ground for a smooth passage to the referendum of 5th July. This means one thing: that our loan agreement be extended by a few weeks so that the referendum takes place in conditions of tranquillity. Immediately after 5th July, if the people have voted Yes, the institutions’ proposal will be signed. Until then, during the next week, as the referendum approaches, any deviation from normality, especially in the banking sector, will be invariably interpreted as an attempt to coerce Greek voters. Greek society has paid a hefty price, through huge fiscal contraction, in order to be part of our monetary union. But a democratic monetary union that threatens a people about to deliver their verdict with capital controls and bank closures is a contradiction in terms. I would like to think that the Eurogroup will respect this principle. As for the ECB, the custodian on our monetary stability and of the Union itself, I have no doubt that, if the Eurogroup takes a responsible decision today to accept the request for an extension of our loan agreement that I am now tabling, it will do what it takes to give the Greek people a few more days to express their opinion.
Colleagues, these are critical moments and the decisions we make are momentous. In years to come we may well be asked “Where were you on the 27th of June? And what did you do to avert what happened? At the very least we should be able to say that: We gave the people who live under the worst depression a chance to consider their options. We tried democracy as a means of breaking a deadlock. And we did what it took to give them a few days to do so.
POSTSCRIPT – The day the Eurogroup President broke with the tradition of unanimity and excluded Greece from a Eurogroup gathering at will
Following my intervention (see above) the Eurogroup President rejected our request for an extension, with the support of the rest of the members, and announced that the Eurogroup would be issuing a statement placing the burden of this impasse on Greece and suggesting that the 18 ministers (that is the 19 Eurozone finance ministers except the Greek minister) reconvene later to discuss ways and means of protecting themselves from the fallout.
At that point I asked for legal advice, from the secretariat, on whether a Eurogroup statement can be issued without the conventional unanimity and whether the President of the Eurogroup can convene a meeting without inviting the finance minister of a Eurozone member-state. I received the following extraordinary answer: “The Eurogroup is an informal group. Thus it is not bound by Treaties or written regulations. While unanimity is conventionally adhered to, the Eurogroup President is not bound to explicit rules.” I let the reader comment on this remarkable statement.
For my part, I concluded as follows:
Colleagues, refusing to extend the loan agreement for a few weeks, and for the purpose of giving the Greek people an opportunity to deliberate in peace and quiet on the institutions’ proposal, especially given the high probability that they will accept these proposals (contrary to our government’s advice), will damage permanently the credibility of the Eurogroup as a democratic decision making body comprising partner states sharing not only a common currency but also common values.
PRESS CONFERENCE PRESENTATION IMMEDIATELY AFTER THE 27th JUNE 2015 EUROGROUP MEETING
Yanis Varoufakis
One of the significant sources of funds for the fascist Nazionist Jesuit Khazarian Mafia is the healthcare industry which registered a whopping $3.09 trillion in 2014, and is projected to soar to $3.57 trillion in 2017, in the US alone.
We can help take down the Dark Cabal by avoiding drugs, defeat any viral attack and scaremongering easily by knowing how to build our own comprehensive antiviral system. Find more about it here.