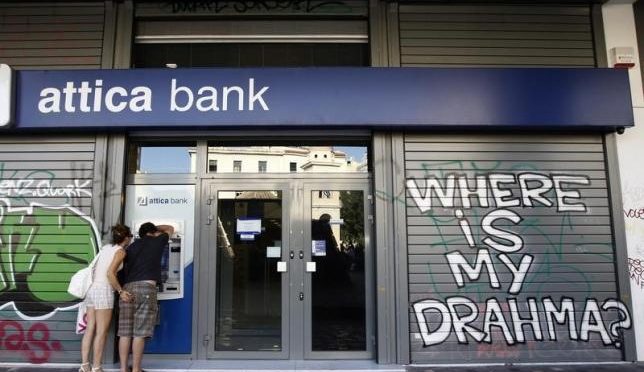 Earlier, the ECB committed to not cutting the ELA funds to the Greek banks. But this has turned out to be a fluke as most of those in the Troika are hell bent on toppling the Tsipras government in much the same way as they imposed sanctions on Russia to topple Vladimir Putin.

People line up to withdraw cash from an automated teller machine (ATM) outside a National Bank branch in Iraklio on the island of Crete, Greece June 28, 2015. (Reuters/Stefanos Rapanis)
The Greek government has announced that banks will remain closed on Monday and restrictions on withdrawals will be introduced following the ECB refusal to provide additional Emergency Liquidity Assistance to Greece’s banking system.
“The Eurogroup’s decision prompted the ECB to not increase liquidity to Greek banks and forced the Bank of Greece to recommend that banks remain closed, as well as restrictive measures on withdrawals,” Greek Prime Minister Alexis Tsipras told the nation in his Sunday night address.

“The bank deposits in the Greek banks are entirely secure,” he reassured. “This holds true for the payment of wages and pensions as well.”
Banks are expected to remain closed for the whole week before the Sunday referendum on the bailout conditions set by Greece’s creditors.
There will be a daily 60 euro ($66) limit on cash withdrawals from cash machines, which will reopen Monday afternoon, Reuters reports citing a government official.
Online transactions will be allowed only within Greece while foreign transfers will be prohibited, the official said.
“The more calmly we deal with difficulties, the sooner we can overcome them and the milder their consequences will be,” Tsipras told the Greeks.
The European Central Bank decided on Sunday not to increase Emergency Liquidity Assistance to the Greek banks, adding that the decision may be reviewed at a later date.
“The Governing Council decided to maintain the ceiling to the provision of emergency liquidity assistance (ELA) to Greek banks at the level decided on Friday,” the ECB said in a statement.
Meanwhile, a number of EU countries are urging their citizens to bring cash to Greece rather than to rely on ATM withdrawals.

The German foreign ministry is suggesting that tourists traveling to Greece “take sufficient amounts of cash” when visiting the country. The British Foreign office urged their citizens to do the same, warning travelers “of the possibility that banking services – including credit card processing and servicing of ATMs – throughout Greece could potentially become limited at short notice.”
It said “make sure you have enough euros in cash to cover emergencies, unforeseen circumstances and any unexpected delays.”
Sweden, Poland, Denmark and Netherlands have also warned their nationals not to rely on bank cards.
In light of a lack of a foreseeable resolution to the Greek crisis, two of the Eurozone’s strongest economies, France and Germany announced that they will hold an internal crisis meeting on Monday.
President Francois Hollande will have discussions with “restricted cabinet” ministers on Monday for an emergency session.
German Chancellor Angela Merkel is scheduled to meet with German parliamentary parties to discuss German policy in relation to the Greek crisis.
Meanwhile, Greek Finance Minister Yanis Varoufakis has told the newspaper Bild, that Merkel holds the “keys in her hand” to secure a deal with its international lenders.
“The government leaders in the EU have to act,” Varoufakis said. “And among them, she, the representative of the most important country, holds the keys in her hands,” he said, referring to Merkel. “I hope she uses them.”
Facing extreme criticism from EU for the decision to hold a referendum on the proposed deal, Varoufakis explained Athens’ decision to hold the vote.
“We couldn’t accept that proposal but also couldn’t simply reject it in view of the importance of the matter for the future of Greece,” he said. “So we decided to turn to the citizens: to explain our negative position but to let them decide.”
RT
One of the significant sources of funds for the fascist Nazionist Jesuit Khazarian Mafia is the healthcare industry which registered a whopping $3.09 trillion in 2014, and is projected to soar to $3.57 trillion in 2017, in the US alone.
We can help take down the Dark Cabal by avoiding drugs, defeat any viral attack and scaremongering easily by knowing how to build our own comprehensive antiviral system. Find more about it here.