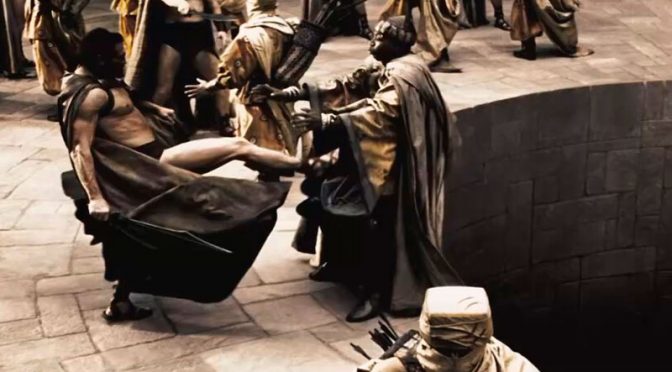 As expected, Greece decides to default on its fiat obligations to the Troika.

The refusal of the Vulture Funds to find middle ground with one of its clients that hosted and bailed out its vulture banks in the country, causing the latter to suffer unprecedented economic hardships as its previous public servants connived with the money lenders, has created ripples of despair to the Sheeples whose only source of financial education are the mainstream media that are unanimous in saying that they will all perish in hunger should a NO vote, a debt default, or a dismembership to the Eurozone will happen.

“We should be clear: almost none of the huge amount of money loaned to Greece has actually gone there. It has gone to pay out private-sector creditors – including German and French banks. Greece has gotten but a pittance, but it has paid a high price to preserve these countries’ banking systems. The IMF and the other “official” creditors do not need the money that is being demanded. Under a business-as-usual scenario, the money received would most likely just be lent out again to Greece. ” read more

We congratulate the Tsipras Government for taking a hard stand against a system that doesn’t fit within a civilized society, a society which recognizes the sanctity of every human life, but rather condone the kleptocratic ascension of egocentric beasts determined to devour its hapless victims at every turn.
For Greece, this should be a good start to economic freedom. They should now return to their sovereign drachma currency and begin the cleanup and rebuilding of the whole economic infrastructure.
There is also an online crowdfunding effort to bailout Greece which should help send the message that they are not alone in these trying times.
Of course, the ultimate solution will always be the complete departure from the myopic system of money, i.e. the medieval system that is absolutely incompatible with the prevailing technologies of today.
The “YES” population in the country is holding a protest today which could become a trigger to a Maidan like color revolution in the country.

And just as promised earlier in the week, Greece has now passed the midnight deadline for repayment of the €1.6 billion bundled loans due to the IMF and in thus in default.
As AP reports,

Yes we are fully aware that using the pejorative term ‘default’ makes us members of the ignorati, but what else do you call it when you fail to pay back a contracted debt in a timely fashion? (and don’t say deferment) Anything else is semantics. This is the first time an advanced economy has defaulted to The IMF and is by far the largest default The IMF has ever faced.
Below is the full list of countries who are (ahem Zimbabwe) or have been in “protracted arrears” to the IMF in the past. Greece is now officially on this list.

And therefore Greece is poised between remaining a member of the eurozone or leaving it. In fact, as WSJ’s Stephen Fidler explains, there are five possible future currency arrangements for Greece. Here they are…
1. Greece stays in the eurozone: This is the option likely to cause the smallest short-term disruption to the Greek economy.  The Greek central bank would retain access to liquidity from the European Central Bank, and the Greek banks would stay on life support. This looks increasingly likely to be accompanied by some kind of further negotiated debt relief. To get it, Greece would almost certainly have to agree to more conditions of the sort successive Greek governments have found it hard to accept.
2. Greece keeps the euro, but sits outside the eurozone: Jacob Funk Kierkegaard of the Peterson Institute for International Economics in Washington calls this the “Montenegro option” and argues this is the most likely outcome should Greece exit the eurozone.  This would not be “a new drachma, but Montenegro—i.e. Greece becomes just another relatively poor unilaterally euroized non-EU Balkan economy,” he writes here. In some ways, this would be the worst of all worlds because Greece would lose access to the ECB. Countries using a foreign currency as legal tender have no access to a lender-of-last-resort, which means that every bank liquidity crisis becomes a solvency crisis. They therefore tend to have stunted domestic financial sectors — which almost every academic study shows is bad for growth — or have a banking system owned by foreigners, which exports the lender-of-last resort role to other countries’ central banks. (Mexico didn’t adopt the dollar after the 1994-95 financial crisis — but in order to avoid an undue shrinkage of its banking sector, it allowed most of its banks to be bought by foreigners.)
3. A currency board: In this case, Greece would create a new currency but lock it to the euro  – as Estonia did with the German mark in 1992 after it gained independence from the Soviet Union. The amount of new drachmas in circulation would be limited by the size of Greece’s international reserves: about $5.8 billion at the last count. Advocates argue that this would impose discipline on the Greeks — poor economic policies lead to an outflow of reserves and therefore of the domestic monetary base, which pushes up drachma interest rates, while good policies have the reverse effect. The drawback is that again the central bank is limited in its lender-of-last resort powers because it cannot create money freely. It also imposes discipline that, for now, may make it look unappetizing to Greece’s current rulers. It’s not much talked about, has a few enthusiastic and long-standing cheerleaders, but is a theoretical possibility. Here’s Steve Hanke arguing in favor.
4. A dual system: Here the drachma and the euro would circulate side-by-side. This has many historical precedents going back centuries. In practice, a dual system is likely to emerge when the Greek government runs out of euros and has to pay its domestic bills in government IOUs. The IOUs could at some future date be redeemed in euros, or could be eventually redeemed in drachmas, but they would initially be euro-denominated obligations of the government that would have a lesser value in the public mind than euro notes or coins. This state of affairs could continue for a long time, but there is an economic tendency called Gresham’s Law: ”Bad money chases out good.” Over time, euros would disappear from circulation because people would hoard them as a store of value  – and people would spend the government IOUs. De facto, the drachma, whether or not it would so be called, would become the main means of exchange.
5. The new drachma: The move to the new drachma may well not come with a bang, but gradually — as described in 4 above. But an eventual formal switch of the currency would give Greece control over its own monetary policy.  However, a new currency — which would likely float against the euro and other major currencies — would likely create enormous short-term disruption, not least because a heavy devaluation would follow and the banks would in effect be insolvent. Longer-term, it could be a motor for future growth of the Greek economy — because it would stimulate demand for Greek exports by lowering in real-terms the price of goods and services produced in Greece.  Longer term, the effects of a devaluation depends on the quality of economic policies that accompany it. It will create inflation, by increasing the costs of imports. One important issue is how much the government raises wages and pensions to compensate for higher inflation. The more domestic wages and pensions are allowed to rise, the less impact the devaluation will have in simulating Greek exports longer term and the lower the benefits to economic growth.
Place your bets.
ZeroHedge
One of the significant sources of funds for the fascist Nazionist Jesuit Khazarian Mafia is the healthcare industry which registered a whopping $3.09 trillion in 2014, and is projected to soar to $3.57 trillion in 2017, in the US alone.
We can help take down the Dark Cabal by avoiding drugs, defeat any viral attack and scaremongering easily by knowing how to build our own comprehensive antiviral system. Find more about it here.

One thought on “It's Midnight in Brussels; Greece has Defaulted!”