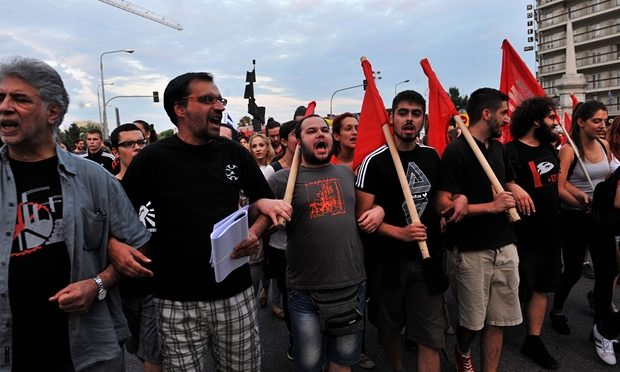 Do the Greeks deserve to be free from debt slavery?
As harsh as this simple question would be, this actually applies to everyone. The rulers of the world have their own doctrine, i.e. a presumption that people must be ruled before they kill themselves with their freedom.

We are asking this question now because there is a tendency that the Greeks would vote “YES” to the coming referendum due to the closure of the banks sending shivers down the pensioners’ spine. This and the notion that a “NO” vote would be a severance from the EU, are what the Tsipras’ government considers a German blackmail.
The Greeks’ ability to decide what’s good for them depends on the level of knowledge and understanding they have on the issue at hand. Unfortunately, that domain is controlled by their mainstream media, just like in any other countries. They can always be manipulated through fear mongering and false surveys…

Even when, behind the scenes, this is what the shrewdest Troika negotiator is saying…

Schaeuble says Greek ‘no’ vote would not mean Grexit-German lawmaker

German Finance Minister Wolfgang Schaeuble has told lawmakers Greece would not have to leave the euro zone if voters said ‘no’ in a referendum on the bailout package on Sunday, a German lawmaker at the meeting said on Tuesday.

“That’s right, he said that,” a conservative lawmaker who was at the meeting said.

Just like we said earlier, the Troika is not sitting on the negotiation’s table with their hearts bleeding for the Greeks. They are there to squeeze and choke the Greeks as much as they could.
Greek Finance Minister Yanis Varoufakis justifies his NO vote with six bulleted observations at the negotiating table:

What are the Greeks’ options at this time?

We always believe that a return to their sovereign currency, i.e. drachma, is better for them in the long run. In fact, they should not have gone joining the EU in the first place, which obviously, they don’t exert any form of control.
Now that they have fallen into the globalist quicksand trap, they have panicked and gasping for a way out of its debt, yet still prefer to stay within the trap itself, i.e. the EU.

A simple guide to what may happen in the pressure cooker of a Greek default.

Much has been said of the insanity of the Greek standoff and I don’t intend to reiterate the grotesque shambles which remains in the wake of the misguided bailout of 2010 which was aimed at securing a future for the fundamentally unsound economic folly of the political euro currency leaving Greece in messy debt servitude.
Greece’s last ditch debt restructuring bailout has been summarily rebuffed, a variation of financial oblivion looms. Of course Mr. Tsipras might fold under pressure before Sunday, in which case, he will face strong pressure to resign and I suspect Greece will erupt in turmoil as his bluster ends up delivering de facto colonization by the Troika creditors.
Presuming the referendum occurs, the range of outcomes can be distilled thus:
A> Greece votes “Yes”: Tsipras resigns (as Energy Minister Panagiotis Lafazanis has already hinted), EU rejoices but unless a technocratic government can be rustled up in Parliament, the ensuing election campaign will waste valuable weeks and add to uncertainty and instability. Any subsequent negotiations will see Greece economically immolated by its unrepentant lenders.
B> Greece votes No:
Technically referenda are considered consultative and need a 40 percent turnout to be deemed relevant.
With Greece in default on its IMF loans, the concept that a strong ‘no’ vote strengthens its hand in negotiations is a dubious assertion verging on folly. There is no negotiation, thus no strengthened position. Egos may be soothed but that won’t feed Greek pensioners.
Possible options:
1) Minister of Administrative Reforms George Katrougalos has claimed Greece is not going to default and will use a strong referendum to strengthen the Greek position at negotiations. The only credible response here is “woof.”
Neither vote enables a simple resolution. No delivers a poisoned chalice. A petulant EU, rattled by Greece’s refusal to be supplicant to the superpower of delusion, won’t receive Alexis Tsipras back into the fold prodigal son-style.
2) Greece maintains the euro: Syriza’s apparent (self-defeating) choice. Athens must release the currency pressure valve to rebalance Greece, enabling future export and tourist growth fuelled by a cheaper New Drachma.
(Incidentally, this default is Greece’s sixth since 1826).


3) Greece is forced out of the euro: Actually there is no single currency exit mechanism. While the EU plays hardball, Greece seems intent on stubbornly hanging in there. Finance Minister Varoufakis has pledged to sue anybody pushing Greece out. An interesting side gambit, presuming they can afford legal counsel. Moreover can Athens afford to pay salaries in euro by the end of next month? That leads us to:
4) Greece introduces parallel currency to pay bills. Thus a New Drachma will emerge and Greece will de facto exit the eurozone. By this stage the EU will be too preoccupied with its own credibility gap to hold Greece within the eurozone’s structures.
Incidentally, if Greece exits the euro, then the conservative President Prokopis Pavlopoulos has signaled he may resign.
5) What about short-term funding? Whether or not Greece remains straitjacketed in the euro noose, the next 2 years (at least) will mark a purdah period with international money markets hostile to new Greek debt. However, in a globally competitive market, sooner or later investors will lend to any sovereign government displaying the vaguest semblance of economic competence. In the short-term, expect to see some offers of support from non-Western lenders – China may be particularly active, Russia has already been reorienting gas pipelines. However no single nation will be inclined to stomach the economic and political risk to bail Greece out singlehandedly.
6) Third party motivated regime change cannot be discounted: Some angry creditors are likely pushing for Syriza to be ousted. However a No vote gives Syriza a mandate to govern, albeit against a very volatile, probably quite chaotic, background.
8) Greece abandons the euro and adopts bitcoin – a lovely idea which would at least guarantee citizens could no longer be subject to summary devaluation at the knee. Alas only slightly more plausible than lenders accepting a No vote is a basis for debt relief.
And what of the eurozone?
The EU has egg on its face and a sickly currency whose sanctity is being undermined. Economically, Greek GDP is barely 1.8 percent of the 335 million citizen eurozone. However contagion risks will be a huge worry. Europe has delayed vital structural reforms and will pay a greater price than the ‘mere’ high unemployment relative stagnation of recent years where Asia rose and Europe froze. Investors will be spooked to realize the euro is not merely perishable, it is in mortal danger. Greece is a small but debt-laden Mediterranean nation, behind the narcissistic political hubris, the EU remains an, albeit fading, giant of global influence.

SUMMARY – We started the day with optimism and finish at square one – #Greferendum (at the moment!) still to go ahead pic.twitter.com/w3w5IhfcoI

One thought on “Greek Default: What are the Options?”