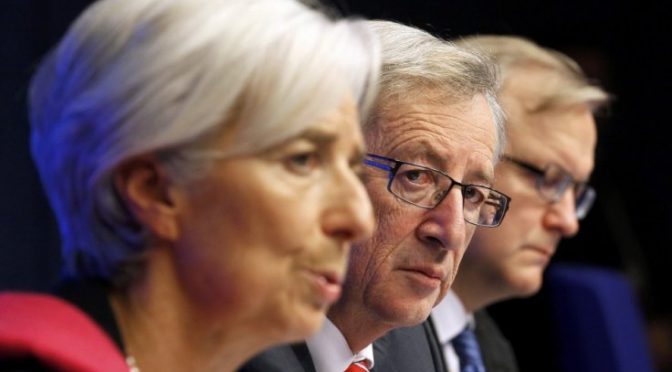 There is a great probability that even with the resounding NO vote against austerity the EU Vultures will never give away their inflexible position and just let the Greek economy slide deeper into recession. This creates impetus for the BRICS Alliance to come in as it has been itching for the past few weeks before the successful Greferendum.

Both Russia and China have already expressed willingness to help Greece because that could spell the end of the Cabalist Bankers’ dominance in that part of the world, the same bankers that imposed economic sanctions against the Russians for the last two years.
The Greek drama will continue and will be more involved in the coming days.

Greeks Vote NO To EU-Imposed Austerity

Paul Craig Roberts
With 90% of the votes counted, the Greek people have voted 61% to 39% against accepting the latest round of austerity that the EU is trying to impose on the Greek people for the benefit of the One Percent. What is amazing is that 39% voted for the One Percent against their own interests. This 39% vote shows that propaganda works to convince people to vote against their own interest.
The vote was not a vote to leave the EU. With the backing of the Greek nation, the Greek government hopes to reopen negotiations with the EU and to find a solution to the debt problem that will actually work. The EU objects to the Greek people having a voice in their fate, and unless common sense prevails is inclined to disregard the vote and to maintain the EU’s inflexible position that the debt issue can be resolved only on the EU’s terms. As has been made perfectly clear, these terms are more looting of the Greek economy by the One Percent.
As the Greek banks are closed and evidently cannot reopen without a resolution of the issue, EU inflexibility would force Greece to leave the euro and return to its own currency in order to reopen the banks. This would not require Greece’s departure from the EU as the UK and one or two other EU member states have their own currencies. However, most likely the EU and Washington and Washington’s Japanese, Canadian, and Australian vassals would attack the new Greek currency and drive its value in exchange markets to such a low value that Greece could not import and wealth held in Greek currency would be worthless abroad.
An inflexible EU creates conditions for Russia and China to act. These two powerful nations have the means to finance Greece and to bring Greece into the economic relationships established by these two countries and by the BRICS.
Alexander Dugin, a Russian strategic thinker who has the ear of the Russian government, has said:
“The Russians are on the side of the Greeks, we will not leave them alone in their suffering. We will help them and give them every possible support. Brussels and the liberal hegemony seek to dismantle Greece. We want to rescue it. We took our religions faith from Greece, as well as our alphabet and our civilization.”
Dugin said that the Greek referendum is the start of “the fundamental European liberalization process from the dictatorship of the New World Order.” He says this also is “our own endeavor.”
The Greek drama is far from over. Pray that the Russian and Chinese governments understand that rescuing Greece is the start of the process of unravelling NATO, Washington’s mechanism for bringing conflict to Russia and China. The One Percent have Italy and Spain targeted for looting, and eventually France and Germany herself. If the Greek people rescue themselves from the clutches of the EU, Italy and Spain could follow.
As Southern Europe departs NATO, Washington’s ability to create violence in Ukraine is diminished as the world realigns against the Evil Empire.
Washington’s power could suddenly diminish, thus saving the world from the nuclear war toward which Washington’s neoconservatives are pushing.
source » MOSCOW (Sputnik), Yulia Shamporova – Over 61 percent of the Greek electorate said “no” in Sunday’s referendum on the country’s international creditors’ latest bailout proposal.

“It’s obvious that they don’t want to open the waterway in the ‘Euro-Titanic.’ It could create a precedent for Portugal, Spain, and Italy,” Monot said.

Monot, who believes that the European Central Bank (ECB) will offset the Greek banking collapse through liquidity injections and emergency loans, said Greece’s three key international creditors would do everything to avoid a so-called Grexit.

“This means that the Troika will accept all the conditions that are imposed by Greece’s decision-makers, who are consolidated by 60 percent of Greeks,” the FN lawmaker told Sputnik.
Eurogroup President Jeroen Dijsselbloem’s spokesman announced an emergency Eurogroup summit to discuss the situation with Greece to take place on Tuesday.
Sputnik

After the Greeks voted against accepting the latest demands from its creditors, Merkel is facing her worst nightmare: a possible Greek exit from the euro, a possible exit from the EU completely and loss of confidence in the currency itself.

For months, Merkel has been anguishing over how to tackle the Greek problem. After five years of bailouts, the problem is nowhere near fixed and – if anything – worse. Yet she may have herself to blame for vacillating over the issue.
When the Greek crisis hit in 2010, Merkel insisted on bringing in the International Monetary Fund (IMF) as part of the troika that included the Eurozone states and the European Central Bank (ECB). There was no clear lead authority. Merkel did this against the advice of her finance minister Wolfgang Schäuble, who has long argued that the EU should solve its own problems. This was the first mistake.
As a result, the three institutions put together a scratch package of bailouts and demands that have created chaos. Traditionally, in previous country bailouts, the IMF would have been the lead agency. The troika have pursued a series of mini bailouts with conflicting demands, when – many argue – a managed exit from the euro would have been the better course of action.
Clash of Cultures
Merkel’s next mistake was a cultural one. When she came to power, Germany was in the grip of economic crisis: high unemployment and a tax and welfare regime that was in need of reform. She set about doing this and her austerity package worked.
When Greece began to collapse, due to its appallingly low rate of tax collection and its totally unsustainable welfare and pensions system, Merkel pronounced that her German reform methods be inflicted on the rather laid back Greeks, who had been enjoying the largesse of Euro membership during the good times. Culturally, to try and turn round the Greek tax and pensions system within five years was to hard a hill to climb.
One the one hand, she was demanding a stricter package of reforms, based on her own Germanic experience, which would inevitably cripple Greece. While on the other hand, she was determined not to let Greece leave the euro and damage the great European dream.
Half of her was Merkel — the pragmatic economist, the other was Merkel — the great European. She has now discovered, in her vacillation, she has not shown the leadership expected of the most powerful woman in the European Union.
Sputnik “The real question is whether we want to continue to live in democracies or if we agree to live in what seems to be more of a cult?” the outspoken politician asked during an interview with the French media, adding that Brussels exerted “an unprecedented pressure on the Greeks.”
The outcome of the Greek referendum provided an answer to this question, according to Le Pen.
Le Pen praised the Greferendum results calling them a victory against “the European Union oligarchy.” On Sunday, more than 60 percent of Greek voters voiced their support for the government of Alexis Tsipras and rejected the terms of a bailout deal offered by the international lenders.

“It is a ‘No’ vote of freedom, of rebellion against European ‘diktats’ of those who want to impose the single currency at any price, through the most inhuman and counter-productive austerity,” Le Pen said in a statement.

According to the National Front leader, the “No” vote “must pave the way for a healthy new approach” to the single European currency, austerity measures and the economic recovery. She reiterated that putting an end to the Eurozone would be an essential step to tackling economic troubles plaguing European nations.

“European countries should take advantage of this event to gather around the negotiating table, take stock of the failure of the euro and austerity and organize the dissolution of the single currency system, which is needed to get back to real growth, employment and debt reduction,” the right-wing politician pointed out.