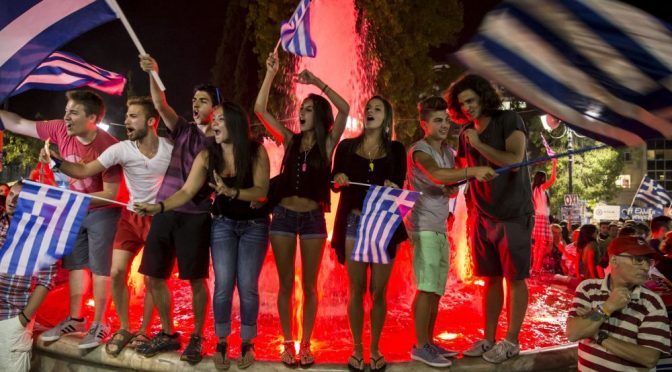 .
The Greek default and subsequent Greek “No” vote to payments of further blood money to bankers, has put a sense of urgency to ongoing negotiations for a new financial system, according to Western and Asian sources. At the same time, the Khazarian mob is resorting to increasingly futile threats and manufactured terror incidents in an attempt to stave off its inevitable ouster from control of banking.

The fact that 61% of Greek citizens voted to refuse to pay for banker’s reckless mistakes indicates a majority of the people at the street level in that country now recognize the criminal nature of the Western banking system. The fact is the Greek people now know they are not legally responsible for debts incurred by Mafiosi banker gamblers and will therefore not pay. This has set in motion the first domino that will lead inexorably to the bankruptcy of the Khazarian banking system and their criminal subsidiary known as the UNITED STATES OF AMERICA CORPORATION. A Greek default, as mentioned previously, is just the first domino that will be followed by Spain, Portugal, Ireland, Italy, France, Germany and then the United States.
The IMF has issued a report calling for a 20-year delay in Greek debt payments because if the IMF lists their loans to Greece as having gone bad, they will have to admit they themselves are insolvent. The world’s major creditor nations like China and other Asian countries refuse to lend more money to the IMF because it remains a de facto tool of the Washington DC criminals who wield a veto over that institution. The Washington DC cabal cannot bail out the IMF or the European Central Bank because they themselves are bankrupt as can be seen by the fact they are cooking their books. They have kept their debt frozen at $18.112 trillion ever since they missed a payment due on March 15th.
Furthermore, other dominos have also begun to fall. In the fuss about Greece, much of the world’s attention has been diverted from the fact that another AMERICA subsidiary, the Nazi government in the Ukraine, has also missed a payment and gone bankrupt. Furthermore, the AMERICA Puerto Rico colony, known by many as the 51st US State, has also publicly said it will not be able to pay its debts.
The new element to this is that the contagion has now spread to China, the largest creditor of the bankrupt AMERICA and thus the country that will be left holding the bag. Chinese stock markets plunged by 30% in the last weeks, driven by retail investor selling. The retail investors know first-hand the real Chinese economy is stumbling because they are not finding overseas buyers for their industrial products.
The Chinese communist government also tried to get funds last week when it sent representatives of the Manchu imperial family to the headquarters of the Bank of Tokyo Mitsubishi-UFJ, in an attempt to cash genuine historical bonds worth trillions of dollars, according to a Chinese government official. At the bank, they were met by
continue reading »
One of the significant sources of funds for the fascist Nazionist Jesuit Khazarian Mafia is the healthcare industry which registered a whopping $3.09 trillion in 2014, and is projected to soar to $3.57 trillion in 2017, in the US alone.
We can help take down the Dark Cabal by avoiding drugs, defeat any viral attack and scaremongering easily by knowing how to build our own comprehensive antiviral system. Find more about it here.