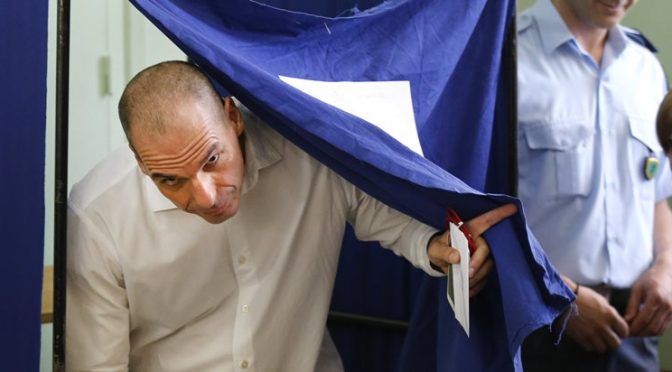 Just a few minutes ago, Greek Finance Minister Varoufakis posted in his blog that he is no longer working with the  Tsipras’s government.

by yanis
The referendum of 5th July will stay in history as a unique moment when a small European nation rose up against debt-bondage.
Like all struggles for democratic rights, so too this historic rejection of the Eurogroup’s 25th June ultimatum comes with a large price tag attached. It is, therefore, essential that the great capital bestowed upon our government by the splendid NO vote be invested immediately into a YES to a proper resolution – to an agreement that involves debt restructuring, less austerity, redistribution in favour of the needy, and real reforms.
Soon after the announcement of the referendum results, I was made aware of a certain preference by some Eurogroup participants, and assorted ‘partners’, for my… ‘absence’ from its meetings; an idea that the Prime Minister judged to be potentially helpful to him in reaching an agreement. For this reason I am leaving the Ministry of Finance today.
I consider it my duty to help Alexis Tsipras exploit, as he sees fit, the capital that the Greek people granted us through yesterday’s referendum.
And I shall wear the creditors’ loathing with pride.
We of the Left know how to act collectively with no care for the privileges of office. I shall support fully Prime Minister Tsipras, the new Minister of Finance, and our government.
The superhuman effort to honour the brave people of Greece, and the famous OXI (NO) that they granted to democrats the world over, is just beginning.
source »

Our NO is a majestic, big YES to a democratic, rational Europe!

On the 25th of January, dignity was restored to the people of Greece.In the five months that intervened since then, we became the first government that dared raise its voice, speaking on behalf of the people, saying NO to the damaging irrationality of our extend-and-pretend ‘Bailout Program’.
We

Ending interminable, self-defeating, austerity and restructuring Greece’s public debt were our two targets. But these two were also our creditors’ targets. From the moment our election seemed likely, last December, the powers-that-be started a bank run and planned, eventually, to shut Greece’s banks down. Their purpose?

The ultimatum of 25th June was the means by which these aims would be achieved. The people of Greece today returned this ultimatum to its senders; despite the fear mongering that the domestic oligarchic media transmitted night and day into their homes.
Today’s referendum delivered a resounding call for a mutually beneficial agreement between Greece and our European partners. We shall respond to the Greek voters’ call with a positive approach to:

Yanis Varoufakis: some of his best quotes 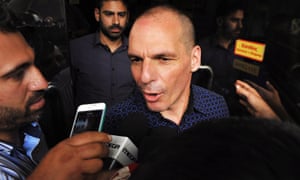 On his resignation on Monday:

I shall wear the creditors’ loathing with pride.

On why Europe’s leaders wanted a Yes vote:

… so they could humiliate the Greeks. Why did they force us to close the banks? To instil fear in people. And spreading fear is called terrorism.

We didn’t even agree to disagree.

On the debt crisis:

Europe in its infinite wisdom decided to deal with this bankruptcy by loading the largest loan in human history on the weakest of shoulders … What we’ve been having ever since is a kind of fiscal waterboarding that has turned this nation into a debt colony.
[The eurozone] resembles a fine riverboat that was launched on a still ocean in 2000. And then the first storm that hit it, in 2008, started creating serious structural problems for it. We started leaking water. And of course, the people in the third class, as in the Titanic, start feeling the drowning effects first.

A committee built on rotten foundations.

We are the leftwing riffraff that has been arguing for decades that the Greek oligarchy is the greatest impediment to growth.

[It’s] just like the Eagles song Hotel California – you can check out any time you like, but you can never leave.

On the election of Syriza:

Quite remarkably, while the insolvent states are visited upon by stern IMF and EU officials, are constantly reviled by the ‘serious’ press for their ‘profligacy’ and ‘wayward’ fiscal stance, the banks go on receiving ECB liquidity and state funding (plus guarantees) with no strings attached. No memoranda, no conditionalities, nothing.

It is an honour to have Bild trying to undermine me. The more they do it, the better I sleep at night.