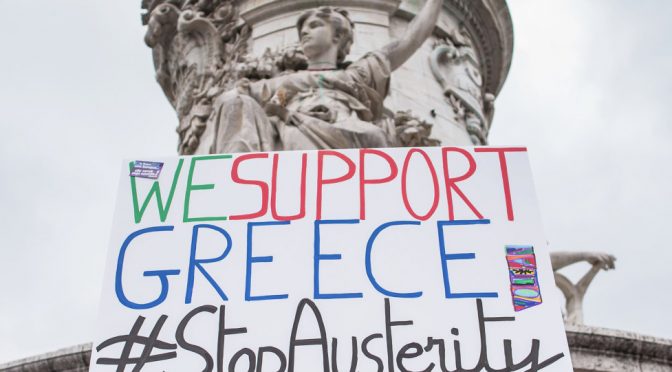 Like we have said earlier, the Greek drama will become more involved in the days ahead and much bigger players will come in.

While these are all happening, let’s not get lost and take our eyes from the bigger monster playing its dirty tricks here and there.

A Trojan Horse in the Home of Austerity 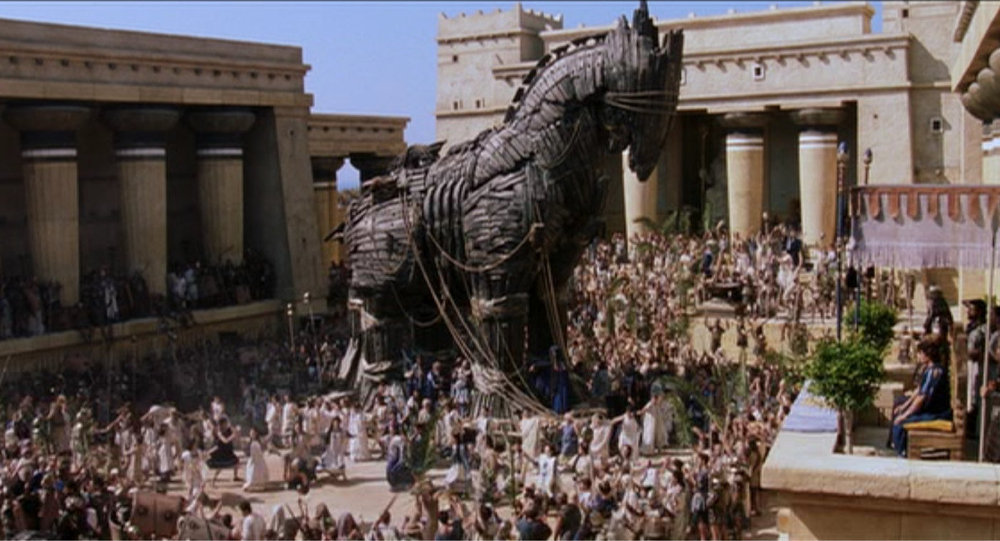 “For it is only criminals
who presume to damage other people nowadays
without the aid of philosophy.”
Robert Musil, The Man Without Qualities.

Odysseus/Ulysses took ten years to go back home after the Trojan War. His descendants are now making history in the original home of democracy. And they are not going anywhere. They have already placed their Trojan horse in the home of intolerance and austerity. There’s no turning back from restoring dignity. And if the Muses rule it, it will be back to the drachma.

The so-called EU “institutions” – along with cosmically mediocre politicians of wealthy EU nations — behaved like barbarians all along, proving, graphically, how the whole Kafkaesque EU construction hates democracy with a vengeance.

Brussels and Berlin proved they are in the regime change business. Updating the exceptionalists on Iraq in 2003, they were advocating the destruction of a democratically elected government via economic Shock and Awe. Their subsequent wet dream was to impose renewed austerity on an interim, unelected technocratic government.

This past week, relentless scare tactics – deployed by Jeroen Dijsselbloem, the Eurogroup chairman, or European Commission (EC) president and certified opportunist Jean-Claude Juncker — asserted that voting “No” would mean a Grexit. Now, the real possibility of a Grexit is threatening to destroy the euro.

The utmost fear of these cosmically mediocre politicians is that other European democracies – starting with Spain in the fall – would start forcefully saying “No” to the austerity obsession.
The mere fact that this is already happening is the ultimate indictment of the troika, whose one size fits all recipe always translates into recession, unemployment and widespread poverty. Their notion of Europe is dead and buried.
Everything is unsustainable

Now it’s the real Thermopylae moment. Do or die. There’s no roadmap, yet, on how Greece may survive in the eurozone without shattering its already hurt and ailing society. That would imply the end of deeply anti-European policies.

This Tuesday’s summit involving Chancellor Merkel and French President Hollande reveals the last-minute desperation of the cosmically mediocre politicos. Merkel now runs a real risk of passing into history as the one who provoked Grexit. And Grexit – as painful as it may be – remains a solution.

Greece’s debt is absolutely “unsustainable” – as newspeak goes. Some form of “restructuring” is inevitable. This means a new bailout has to be ironed out by the finance ministers of the eurozone. It may take weeks to forge a new deal. In the short term, the European Central Bank (ECB) is on a very long tightrope, having to decide what to do with the Greek banking system.

The Greek people benefited from less than 10% of the 240 billion euro bailout. Essentially German and French commercial banks were bailed out – as Greece was forced to take “emergency loans” to pay them. And to get these loans Athens was forced to impose austerity and cringe under neoliberalism run amok.
All evidence suggests the eurozone will continue to play hardball. Even though the IMF itself admits some debt relief is inevitable. Even though Merkel herself, in a bit of NSA spying released by Wikileaks, admitted (way back in October 2011) that Greece’s debt was “unsustainable”.
Greek government debt is still a whopping 320 billion euros, 78% of it owed to the troika. And still the troika is tempted to turn on the screw even more – now using the tactic of empty ATMs leading to regime change. Yet this may all backfire and precipitate – what else — Grexit.
And Grexit will be just the start of a whole new Sophocles-inspired tragedy. Once one nation breaks with the single currency, the monetary union itself is totally exposed. The (Neoliberal) Goddess of the Market will be eagerly looking for the next victim – Spain, Italy, Ireland.
The democracy Trojan horse now lies, in silence, in the home of austerity. The battle is about to begin.
Sputnik
One of the significant sources of funds for the fascist Nazionist Jesuit Khazarian Mafia is the healthcare industry which registered a whopping $3.09 trillion in 2014, and is projected to soar to $3.57 trillion in 2017, in the US alone.
We can help take down the Dark Cabal by avoiding drugs, defeat any viral attack and scaremongering easily by knowing how to build our own comprehensive antiviral system. Find more about it here.

One thought on “The battle is about to begin”