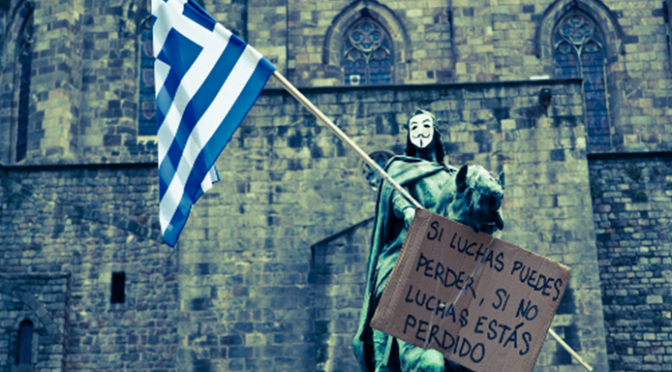 The economic turmoil in Greece and elsewhere are not caused by force majeure but deliberate. It can be avoided to happen again in the future as it should not have happened in the first place, provided the creation of shadow wealth is prohibited.

Shadow wealth created by fiat institutions, i.e. stock market and fractional banking, are all subject to speculative manipulations that the people behind those same institutions are themselves culpable. They claimed to have created a system where everyone has equal opportunity to make it big financially and yet fair market is not the game their willing to play.
The sole purpose of such institutions is to facilitate the extraction of labor for the creation of wealth and the Oligarchy’s exclusive access thereafter.
They are smart enough to allow us to feed and house ourselves creating the illusion of freedom and yet they control how bearable life would be through the amount of shadow wealth reflected on the paper currency they issued in our favor.
The capitalist free market idea did not start with the same amount of tangible wealth in everyone’s pocket, that’s the root of all inequalities and all subsequent derivative deceptions that followed. The gap between the rich and the poor will continue to widen until the poor decides to eat the rich.
The wholesale bankers’ slight of hand causing the Greek default is just a symptom of a wider plot to reduce the population through hunger and disease, one country at a time, in the covert march towards a globalist Technocratic Dictatorship of the Oligarchy.

The Biggest Winner From The Greek Tragedy

Submitted by Tyler Durden on 07/06/2015 22:42 -0400
Long after Greece has left the Eurozone and Germany is using the Deutsche Mark as its currency, the people of the two nations, antagonized to a level unseen since World War II, will be accusing each other of benefiting more from the brief but tumultuous period of the common currency.
In reality, nobody had put a gun to Greece’s head and told it to lever up, enriching local oligarchs and corrupt politicians, taking advantage of credit that was artificially cheap only due to the common currency and an implicit monetary, if not fiscal, union.
Germany, whose exports account for nearly 50% of GDP, on the other hand experienced an unprecedented exporting golden age, made possible only due to an artificial currency, the Euro, that was by definition created to be weaker than the Deutsche Mark and benefited from any bout of weakness in Europe’s periphery, such as the past 5 years.
The truth is, when things were good nobody second-guessed any decisions for a second, and since the rising economic tide lifted all boats, nobody cared.
And then the tide rolled out, displaced by trillions in bad loans and gargantuan mountains of sovereign and financial debt, which ultimately would lead to the first, then second, then third and then an all-out cascade of sovereign defaults.
Sadly, the losers – regardless of the propaganda and jingoist rhetoric – are the ordinary, common, taxpaying people of Germany and Greece (and every other European nation), who enjoyed a few brief years of artificial prosperity, which in retrospect was entirely due to debt, masked well by the “currency swaps” and other financial engineering concocted by banks such as Goldman Sachs, in clear violation of the Maastricht treaty which is now a long-forgotten memory of the founding ideals behind the Eurozone.
For every loser there is a winner, and in the case of Greece and its tragedy, just as millions are about to lose everything, a few not only made billions but quietly, under the guise of “sovereign bailouts” transferred their entire risk onto the taxpaying public.
They are shown in the chart below.

It is that transfer of private-to-public risk, which is also the main reason why the public debt of so many European countries, not only Greece, whose debt is record high despite a default to its private creditors in 2012 and where only 10% of bailout proceeds ever made it to the actual economy…

… but the entire periphery has soared in the last few years.

Inevitably, there will be many angry people, because what is about to come to Europe will be hardship unlike anything seen in generations. Our suggestion: before neighbor takes it out on neighbor, study the following map closely because just like Libor was an impossible conspiracy theory until it was a proven fact, what is happening in Europe was propagated and effectuated by one bank more than any other.
This one:

Or, one can ignore this as merely yet another conspiracy theory. And that’s fine.
But there is one critical, factual loose end that has to be investigated.
Back in June 2012, the ECB, whose head was the recently crowned Mario Draghi who had less than a decade ago worked at none other than Goldman Sachs, was sued by Bloomberg’s legendary Mark Pittman under Freedom of Information rules demanding access to two internal papers drafted for the central bank’s six-member Executive Board. They show how Greece used swaps to hide its borrowings, according to a March 3, 2010, note attached to the papers and obtained by Bloomberg News. The first document is entitled “The impact on government deficit and debt from off-market swaps: the Greek case.” The second reviews Titlos Plc, a securitization that allowed National Bank of Greece SA, the country’s biggest lender, to exchange swaps on Greek government debt for funding from the ECB, the Executive Board said in the cover note. From Bloomberg:

In the largest derivative transaction disclosed so far, Greece borrowed 2.8 billion euros from Goldman Sachs Group Inc. in 2001 through a derivative that swapped dollar- and yen-denominated debt issued by the nation for euros using a historical exchange rate, a move that generated an implied reduction in total borrowings.
“The Greek authorities had never informed Eurostat about this complex issue, and no opinion on the accounting treatment had been requested,” Eurostat, the Luxembourg-based statistics agency, said in a statement. The watchdog had only “general” discussions with financial institutions over its debt and deficit guidelines when the swap was executed in 2001.
“It is possible that Goldman Sachs asked us for general clarifications,” Eurostat said, declining to elaborate further.

The ECB’s response: “the European Central Bank said it can’t release files showing how Greece may have used derivatives to hide its borrowings because disclosure could still inflame the crisis threatening the future of the single currency.”
Considering the crisis of the (not so) single currency is very much “inflamed” right now as it is about to be proven it was never “irreversible”, perhaps it is time for at least one aspiring, true journalist, unafraid of disturbing the status quo of wealthy oligarchs and central planners, to at least bring some closure to the Greek people as they are swept out of the Eurozone which has so greatly benefited the very same Goldman Sachs whose former lackey is currently deciding the immediate fate of over €100 billion in Greek savings.
Because something tells us the reason why Mario Draghi personally blocked Bloomberg’s FOIA into the circumstances surrounding Goldman’s structuring, and hiding, of Greek debt that allowed not only Goldman to receive a substantial fee on the transaction, but permitted Greece to enter the Eurozone when it should never have been allowed there in the first place, is that the person who oversaw and personally endorsed the perpetuation of the Greek lie is none other than Goldman’s Vice Chairman and Managing Director at Goldman Sachs International from 2002 to 2005. The man who is also now in charge of the ECB.
Mario Draghi.

ZeroHedge
That man is just a stooge.
One of the significant sources of funds for the fascist Nazionist Jesuit Khazarian Mafia is the healthcare industry which registered a whopping $3.09 trillion in 2014, and is projected to soar to $3.57 trillion in 2017, in the US alone.
We can help take down the Dark Cabal by avoiding drugs, defeat any viral attack and scaremongering easily by knowing how to build our own comprehensive antiviral system. Find more about it here.