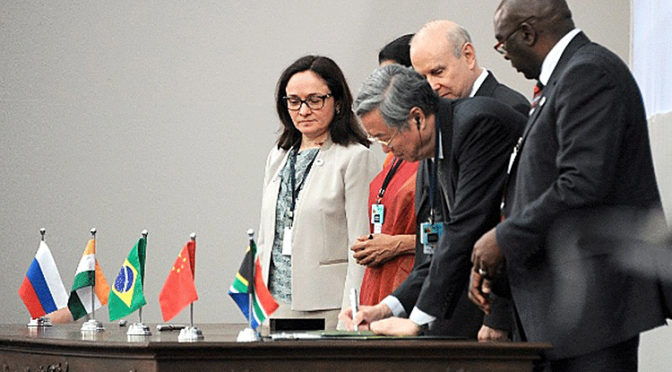 As austerity-ravaged Europe watches its undemocratic “institutions” grapple with the Greek tragedy, and the US backtracks on a fair nuclear deal with Iran, geopolitical tectonic plates are shifting in the Urals.

Pepe Escobar is the roving correspondent for Asia Times/Hong Kong, an analyst for RT and TomDispatch, and a frequent contributor to websites and radio shows ranging from the US to East Asia.
Published time: July 13, 2015 09:04

As austerity-ravaged Europe watches its undemocratic “institutions” grapple with the Greek tragedy, and the US backtracks on a fair nuclear deal with Iran, geopolitical tectonic plates are shifting in the Urals.
Can you feel an inchoate multipolar world? Well, just look right here at the BRICS 2015 Ufa declaration. The EU is hardly featured in the BRICS declaration and not by accident.
Forget about the dead on arrival G7. This – the joint BRICS/SCO summit – is the real deal in 2015. Russia’s diplomatic masterstroke was to merge two summits – BRICS and the Shanghai Cooperation Organization (SCO) – with a third, informal meeting of the Eurasian Economic Union (EEU).
After all, some nations with leaders present in Ufa are members of at least one of these organizations. But the absolute key point is that getting BRICS, SCO and EEU leaders in one place packs a graphic punch about the emergence of a coordinated, Eurasia-wide, and in some aspects worldwide drive towards a more equitable world order not dictated by exceptionalists.
READ MORE: BRICS/SCO summits at a glance: New Development Bank, Greece crisis, Iran oil
And then there’s Iran. President Rouhani met President Putin in Ufa to discuss a formidable range of topics. Not least the coming acceptance of Iran as a member of the SCO, assuming there is a deal in Vienna and after UN sanctions are lifted.
Right on cue, and also not by accident, US President Barack Obama issued marching orders to Secretary of State John Kerry to backtrack from some positions the entire Iran/P5+1 diplomatic corps was already taking for granted – as a top Iranian negotiator confirmed to me in Vienna.
So here’s the not-so-veiled message to Rouhani and Foreign Minister Zarif: Iran will be “punished” for getting too close to Moscow.

Have strategy, will travel

Only Russia is a member of all three organizations – BRICS, SCO and EEU. Russia and China are key members of two – BRICS and SCO. The Russia-driven EEU is slowly but surely merging with the China-driven New Silk Roads. The key structural framework is the ever-solidifying Russia-China strategic partnership.
As the Pentagon remains self-absorbed in its 2002-concocted Full Spectrum Dominance doctrine, Russia and China counterpunch with full spectrum cooperation on politics, economics, finance, diplomacy and defense.
The endgame – which will be the apex of the current New Great Game in Eurasia – is a new global geopolitical structure anchored on Eurasian integration. Thus the importance of Iran: no matter what happens in Vienna, Iran is the vital hub/node in Eurasia.

The road has been long for the SCO. I remember when Euro-bureaucrats only a few years ago dismissed it as a mere talk shop. What started as a security forum to integrate the Central Asian “stans” so they would not be ravaged by terrorism and extremism evolved into a serious economic/political organization.
So now the SCO is starting to add to, and draw upon, the BRICS’s ever expanding economic cooperation, which features two essential pillars: the Asia Infrastructure Investment Bank (AIIB) and the BRICS’s New Development Bank (NDB). As for the EEU, it is also indirectly linked to China, as part of the Russia-China strategic partnership.
This will all translate in the next few years into a complex maze of economic and trade/commerce networks traversing Eurasia. Call it the road map of the myriad New Silk Road(s).

Faster! Dust up our war plans!

Here’s just a sample of what has been decided in Ufa: Putin and Chinese President Xi Jinping actively discussed, face-to-face, interlinks in the New Silk Road(s); India will become a full member of the SCO next year; Russia’s Finance Minister Anton Siluanov was appointed chairman of the BRICS New Development Bank (NDB), which will finance infrastructure projects not only in the five BRICS countries, but in other developing nations as well. And all that based in their own currencies, bypassing the US dollar.
READ MORE: BRICS New Development Bank may approve first loan by April, 2016 – President Kamath
The NDB has the potential to accumulate as much as $400 billion in capital, according to bank head KV Kamath. The parent capital is $100 billion.
Currency swaps are the way to go. It already applies to Russia and China on trade in futures, and Putin has dubbed its expansion to other nations as “interesting.”
A strategy for BRICS economic partnership has been devised that “touches upon the responsibility of different ministers and requires high-level coordination,” according to Russia’s Economic Development Minister Aleksey Ulyukaev, which means in essence easier trade between BRICS nations.
Both the China-led Asian Infrastructure Investment Bank (AIIB) and the NDB are headquartered in China. However, they won’t compete with each other; they will add to and complement one another.
Russia’s Direct Investment Fund (RDIF) signed a memorandum of understanding with the other BRICS. Significantly, China’s Silk Road Fund and India’s IDFC (Infrastructure Development Finance Company) are key partners.
Russia will lift restrictions on Chinese banks working in Russia, accelerating Beijing’s drive to invest in all sectors of the

[soundcloud url=”https://api.soundcloud.com/tracks/214129495″ params=”color=00cc11″ width=”100%” height=”166″ iframe=”true” /]
Russia proposed a roadmap for investment cooperation. Crucially, that includes the possibility of an energy association, according to Putin, as well as an international energy research center.
The subject of energy brings us to Greece. Russia’s Turkish Stream pipeline – yet another diplomatic/energy counterpunch after the EU scored a proverbial own goal by scotching the South Stream – will be linked to Greece.
READ MORE: BRICS/SCO summits in Russian city of Ufa LIVE UPDATES
No wonder that elicited panic in Exceptionalistan. What if Syriza’s “flirting with Moscow” becomes a strategic shift, thus causing NATO’s eastern flank to fall to pieces?
It doesn’t matter that Russia wants a strong EU – and the EU won’t be strong without Greece, as Russia’s Foreign Minister Sergey Lavrov emphasized in Ufa.
So what does NATO propose to seduce anyone across Eurasia away from all the frantic BRICS, SCO and EEU politico/economic activity? Nothing less than an obsession with a “strategy rethink.” In other words, detailed “secret” scenarios for a war on European soil.
That’s all one needs to know about who wants what in the new, emerging geopolitical order.

Even as the Silk Road keeps cropping up during Chinese interactions with Europe, China’s Xinjiang province will host fifty-five cities from 17 countries, including Britain, Germany, Russia and France, for a Silk Road development forum later this month, officials said on Monday.

The “Silk Road Economic Belt Cities Cooperation and Development Forum” will be held from July 23 to 25 in the regional capital of Urumqi.
Global delegates “will exchange development experience and explore cooperation in trade, industry, the Internet and infrastructure,” Chinese state agency Xinhua quoted the local government of Urumqi.
In March this year, China’s President Xi Jinping said he hoped its annual trade with the countries involved in Beijing’s plan to create a modern Silk Road would surpass $2.5 trillion in a decade.
Under the so-called “One Belt, One Road” initiative, China aims to create a modern Silk Road Economic Belt and a 21st Century Maritime Silk Road to boost trade and extend its global influence.
China’s Commerce Minister Gao Hucheng said previously that more than 50 countries had shown interest in the initiative.
This will be the third time that Urumqi has hosted the forum. The first and second were held in November 2013 and September 2014.
Chinese Premier Li Keqiang has also promised to invest billions of dollars into Europe’s new infrastructure fund last month.
EU governments have been keen to build links with China as part of their efforts to get European companies trading with fast-growing emerging markets.
“Connecting British firms and markets to China’s extraordinary expansion is a key part of our economic plan, because it brings jobs and investment to our country,” British Finance Minister George Osborne said earlier.
The Silk Road connected China and Europe from around 100 B.C.
The 4,000-mile road linked ancient Chinese, Indian, Babylonian, Arabic, Greek and Roman civilizations.
A new map unveiled by Xinhua shows the Chinese plans for the Silk Road run through Central China to the northern Xinjiang from where it travels through Central Asia entering Kazakhstan and onto Iraq, Iran, Syria and then Istanbul in Turkey from where it runs across Europe cutting across Germany, Netherlands and Italy.
The maritime Silk Road begins in China’s Fujian and ends at Venice, Italy.
The network would include building railways, highways, oil and gas pipelines, power grids, Internet networks, maritime and other infrastructure links.
Earlier last year, China announced a $40 billion Silk Road Fund to strengthen connectivity in the Asia-Pacific region.
The new Silk Road, covers 18 Asian and European countries with a population of about three billion people.
Chinese President Xi Jinping proposed the Silk Road Economic Belt in 2013 as an overland network focused on boosting international trade and cooperation on infrastructure projects with Central, South and West Asian countries.
Hungary last month signed an agreement with China officially joining Beijing’s ambitious Silk Road network.
Hungary becomes the first European country to join China’s “One Belt, One Road” project. The Silk Road could be the second China-led project in recent months to attract a flurry of EU participation.
Russia has already promised to link its new Eurasia Economic Union with China’s Belt and Road.
US-based Baker & McKenzie research shows Chinese investment into Europe is at record levels. With 153 separate investments worth $18 billion last year, Europe has emerged as one of the top destinations for Chinese foreign investment globally.
In addition to trade efforts, China is seeking to boost its global influence by signing up countries to its Asian Infrastructure Investment Bank (AIIB).
Half of the European Union including Germany, Britain, France, Italy are founding members of the AIIB.
TBP and Agencies