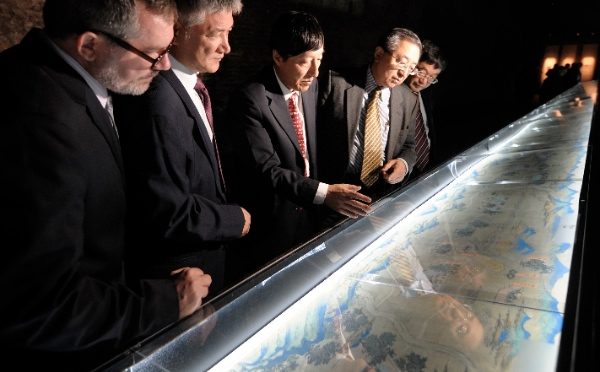 “This clearly defines “Resource Development”. An amazing feat merely because China wants to invest and develop a 4000 mile infrastructure with trading partners from Asia to England.  Every nation will profit from trade, not war, and a one-world multicultural exchange that will be a huge reward for humanity.
A dream? Why not? Technology will soar.”

“An additional massive continuation of the Silk Road, not included in this segment, is a proposed rail system linking Asia and Russia to the US via Alaska and Canada.
We spent $80 billion on the B-2 program, and what did we achieve?  More destruction!  We’ll learn more love and compassion the Silk way! Will there be problems along the way? Of course!  Let’s join in and build it anyhow, all for the sake of freedom with no preconceived boundaries.
It’ll be so much better than reloading between wars. There’s no profit in extinction.”

Thank you, John, for sharing your insights.

July 21, 2015, 10:31 am
School of Archaeology and Museology of Peking University, introduces a 30-meter-long ancient Chinese map, depicting cities along the Silk Road, during the preview of “To the East: Cities, Men and Gods Along the Silk Road”, the opening exhibition of the first Silk Road International Cultural Biennale, at the Baths of Diocletian in Rome, Italy, Oct. 20, 2011 [Xinhua]
Chinese companies have signed 1,401 project contracts worth $37.6 billion in countries along its Silk Road initiative in the first half of this year, nearly half of combined overseas contract value, according to official data released on Tuesday.
The contracts were worth $37.6 billion, up 16.7 per cent year on year, and accounting for 43.3 per cent of contracts in the period, Shen Danyang, the Ministry of Commerce (MOC) spokesman, said.
Chinese companies signed overseas project contracts worth $86.7 billion in the first six months, representing an increase of 6.9 per cent year on year, he said.
In March this year, China’s President Xi Jinping said he hoped its annual trade with the countries involved in Beijing’s plan to create a modern Silk Road would surpass $2.5 trillion in a decade.
Under the so-called “One Belt, One Road” initiative, China aims to create a modern Silk Road Economic Belt and a 21st Century Maritime Silk Road to boost trade and extend its global influence.
Hungary last month signed an agreement with China officially joining Beijing’s ambitious Silk Road network.
Hungary becomes the first European country to join China’s “One Belt, One Road” project. The Silk Road could be the second China-led project in recent months to attract a flurry of EU participation.
Russia has already promised to link its new Eurasia Economic Union with China’s Belt and Road.
The Silk Road connected China and Europe from around 100 B.C.
The 4,000-mile road linked ancient Chinese, Indian, Babylonian, Arabic, Greek and Roman civilizations.
A new map unveiled by Xinhua shows the Chinese plans for the Silk Road run through Central China to the northern Xinjiang from where it travels through Central Asia entering Kazakhstan and onto Iraq, Iran, Syria and then Istanbul in Turkey from where it runs across Europe cutting across Germany, Netherlands and Italy.
The maritime Silk Road begins in China’s Fujian and ends at Venice, Italy.
The network would include building railways, highways, oil and gas pipelines, power grids, Internet networks, maritime and other infrastructure links.
Earlier last year, China announced a $40 billion Silk Road Fund to strengthen connectivity in the Asia-Pacific region.
China’s Xinjiang province will host fifty-five cities from 17 countries, including Britain, Germany, Russia and France, for a Silk Road development forum later this month, officials said on Monday.
The “Silk Road Economic Belt Cities Cooperation and Development Forum” will be held from July 23 to 25 in the regional capital of Urumqi.
TBP and Agencies


The New Development Bank (NDB) of the BRICS countries launched business in Shanghai on Tuesday and will soon set up a hotline with the new China-led Asian Infrastructure Investment Bank.
The BRICS countries include the world’s major emerging economies: Brazil, Russia, India, China and South Africa.
Chinese Finance Minister Lou Jiwei, Shanghai Mayor Yang Xiong and NDB’s first President Kundapur Vaman Kamath from India attended the opening ceremony held in a hotel in Shanghai.
The NDB will help with the recovery and development of emerging economies, said China’s Finance Minister Lou.
“NDB is a new member and partner to the global development system. NDB’s support for infrastructure construction will effectively ease the bottleneck that has constrained emerging and developing nations for long and will offer support for their economies’ upgrade and growth,” said Lou.
The Chinese Finance Minister also said the BRICS Bank will work closely with the China-led AIIB, as was announced through the Ufa communique at the close of the 7th BRICS Summit in Russia earlier this month.
The NDB will supplement the existing international financial system in a healthy way and explore innovations in governance models, Lou said at a seminar following the ceremony.
President Kamath said the Bank would look at tapping financial and capital markets in BRICS nations.
“Should we approach the financial markets, the capital markets in five BRICS countries to raise local-currency funds so that in a way we break the challenge and the cost of dealing in hard currencies where the exchange rate continues to impact you for a long, long time? Could we start by making substantially large bond issuance in the domestic market? We will have an open mind in terms of the instruments we will use for funding projects,” said Kamath.
The NDB with about $50 billion in capital to invest in public infrastructure will compete with institutions where the US has considerably more influence—organizations such as the World Bank and the International Monetary Fund.
The agreement was signed by the bloc’s five members — Brazil, Russia, India, China and South Africa — on July 15 last year during the sixth BRICS summit.
The bank has an initial authorized capital of $100 billion.
Its initial subscribed capital of $50 billion will be equally shared among the founding members.
It will have a three-tier governance structure — a board of governors, a board of directors, a president and vice presidents.
As agreed by the five countries, the first chair of the board of governors has been nominated by Russia, the first chair of the board of directors by Brazil, and the first president by India.
An African regional center of the bank will be based in Johannesburg, South Africa.
China, with $4 trillion in foreign exchange reserves, is pushing for the growth of its own multilateral bodies, including the AIIB, the BRICS Bank and a bank for the Shanghai Cooperation Organization, but also seeking to strengthen its voice at the World Bank and the International Monetary Fund.
TBP and Agencies

There have been some notable events on the way to the 3rd quarter of this year. More of these events are positive but there are still few actions from the usual suspects that are needing to be dealt with in due time.
Some of the positive events are the following:

The negative events include the following;

The Jesuit Khazarian Mafia believe that only the fittest must survive. Well, they should realize by now that the global awakening is accelerating exponentially and many of the useless eaters are now staring at the gates of their undeserved palaces. They better start packing.