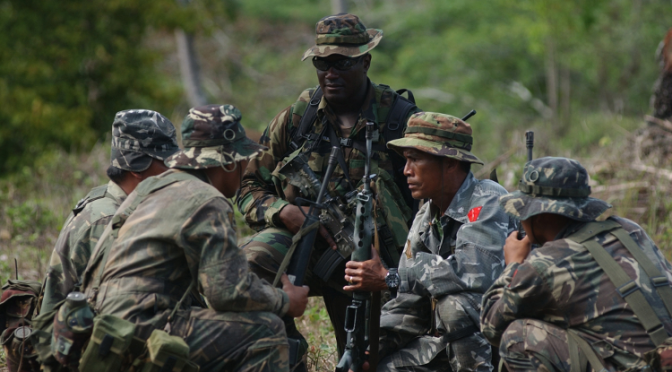 For most of the people in the Philippines, the “war on terror” of the Bush administration was morally and lawfully justified. All media networks were more than enthusiastic about posting Bin Laden’s bearded poster side by side with the local Abu Sayaff bandits responsible for showing ISIL fighters how to effectively do it.

The Abu Sayyaf Group, like the ISIL and Muslim Brotherhood in the Middle East, is just a criminal group organized by the Central Intelligence Agency of the United States. Of course, those who understood what’s really happening decided to do something about it.
At least 300 young idealistic military officers occupied the Oakwood Luxury Hotel in Makati Business District to voice out their grievances against the government which was involved in the deliberate bombing of Christian civilians to feed the “war on terror” against our Muslim brothers in the South.

The Oakwood Mutiny exposed the culpability of our government in the murder of innocent civilians through a written and signed document titled Operation Plan: GreenBase, an elaborate instruction to conduct several false flag operations nationwide in preparation for the redeclaration of Martial Law and for the government’s unfettered  intrusion to privacy.
These false flag operations turned out to be very successful in attaining all primary objectives.

A largely forgotten front in George W. Bush’s “global war on terror” has been the Philippines where military campaigns to crush various rebel groups and political activists have led to charges of extrajudicial killings, torture and other war crimes, reports Marjorie Cohn.
By Marjorie Cohn
After Sept. 11, 2001, President George W. Bush declared the Philippines a second front in the war on terror (“Operation Enduring Freedom-Philippines”). The Philippine government used this as an opportunity to escalate its war against Muslim separatists and other individuals and organizations opposing the policies of the government. The egregious human rights violations committed by the Philippine military and paramilitary forces are some of the most underreported atrocities in the media today.
The International Peoples’ Tribunal on Crimes Against the Filipino People, held July 16-18 in Washington, D.C., drew upward of 300 people. An international panel of seven jurors heard two days of testimony from 32 witnesses, many of whom had been tortured, arbitrarily detained and forcibly evicted from their land.

One thought on “Forgotten ‘War on Terror’ in The Philippines”