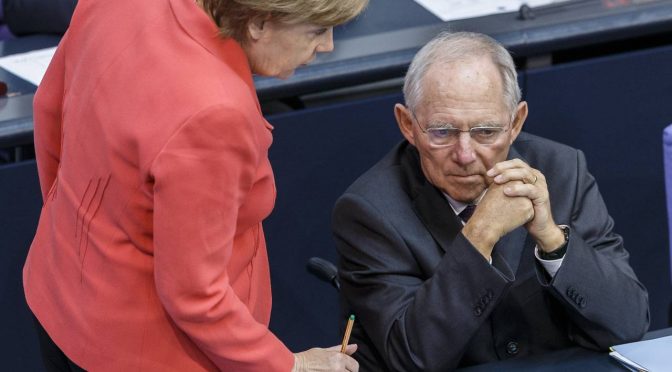 Eurozone leaders demanded that Greek public assets be transferred to a Treuhand-like fund – a fire-sale vehicle similar to the one used after the fall of the Berlin Wall to privatize quickly, at great financial loss, and with devastating effects on employment all of the vanishing East German state’s public property.

Yanis Varoufakis
ATHENS – On July 12, the summit of eurozone leaders dictated its terms of surrender to Greek Prime Minister Alexis Tsipras, who, terrified by the alternatives, accepted all of them. One of those terms concerned the disposition of Greece’s remaining public assets.
Eurozone leaders demanded that Greek public assets be transferred to a Treuhand-like fund – a fire-sale vehicle similar to the one used after the fall of the Berlin Wall to privatize quickly, at great financial loss, and with devastating effects on employment all of the vanishing East German state’s public property.
This Greek Treuhand would be based in – wait for it – Luxembourg, and would be run by an outfit overseen by Germany’s finance minister, Wolfgang Schäuble, the author of the scheme. It would complete the fire sales within three years. But, whereas the work of the original Treuhand was accompanied by massive West German investment in infrastructure and large-scale social transfers to the East German population, the people of Greece would receive no corresponding benefit of any sort.
Euclid Tsakalotos, who succeeded me as Greece’s finance minister two weeks ago, did his best to ameliorate the worst aspects of the Greek Treuhand plan. He managed to have the fund domiciled in Athens, and he extracted from Greece’s creditors (the so-called troika of the European Commission, the European Central Bank, and the International Monetary Fund) the important concession that the sales could extend to 30 years, rather than a mere three. This was crucial, for it will permit the Greek state to hold undervalued assets until their price recovers from the current recession-induced lows.
Alas, the Greek Treuhand remains an abomination, and it should be a stigma on Europe’s conscience. Worse, it is a wasted opportunity.
The plan is politically toxic, because the fund, though domiciled in Greece, will effectively be managed by the troika. It is also financially noxious, because the proceeds will go toward servicing what even the IMF now admits is an unpayable debt. And it fails economically, because it wastes a wonderful opportunity to create homegrown investments to help counter the recessionary impact of the punitive fiscal consolidation that is also part of the July 12 summit’s “terms.”
It did not have to be this way. On June 19, I communicated to the German government and to the troika an alternative proposal, as part of a document entitled “Ending the Greek Crisis”:
“The Greek government proposes to bundle public assets (excluding those pertinent to the country’s security, public amenities, and cultural heritage) into a central holding company to be separated from the government administration and to be managed as a private entity, under the aegis of the Greek Parliament, with the goal of maximizing the value of its underlying assets and creating a homegrown investment stream. The Greek state will be the sole shareholder, but will not guarantee its liabilities or debt.”
The holding company would play an active role readying the assets for sale. It would “issue a fully collateralized bond on the international capital markets” to raise €30-40 billion ($32-43 billion), which, “taking into account the present value of assets,” would “be invested in modernizing and restructuring the assets under its management.”
The plan envisaged an investment program of 3-4 years, resulting in “additional spending of 5% of GDP per annum,” with current macroeconomic conditions implying “a positive growth multiplier above 1.5,” which “should boost nominal GDP growth to a level above 5% for several years.” This, in turn, would induce “proportional increases in tax revenues,” thereby “contributing to fiscal sustainability, while enabling the Greek government to exercise spending discipline without further shrinking the social economy.”
In this scenario, the primary surplus (which excludes interest payments) would “achieve ‘escape velocity’ magnitudes in absolute as well as percentage terms over time.” As a result, the holding company would “be granted a banking license” within a year or two, “thus turning itself into a full-fledged Development Bank capable of crowding in private investment to Greece and of entering into collaborative projects with the European Investment Bank.”
The Development Bank that we proposed would “allow the government to choose which assets are to be privatized and which not, while guaranteeing a greater impact on debt reduction from the selected privatizations.” After all, “asset values should increase by more than the actual amount spent on modernization and restructuring, aided by a program of public-private partnerships whose value is boosted according to the probability of future privatization.”
Our proposal was greeted with deafening silence. More precisely, the Eurogroup of eurozone finance ministers and the troika continued to leak to the global media that the Greek authorities had no credible, innovative proposals on offer – their standard refrain. A few days later, once the powers-that-be realized that the Greek government was about to capitulate fully to the troika’s demands, they saw fit to impose upon Greece their demeaning, unimaginative, and pernicious Treuhand model.
At a turning point in European history, our innovative alternative was thrown into the dustbin. It remains there for others to retrieve.
project-syndicate.org