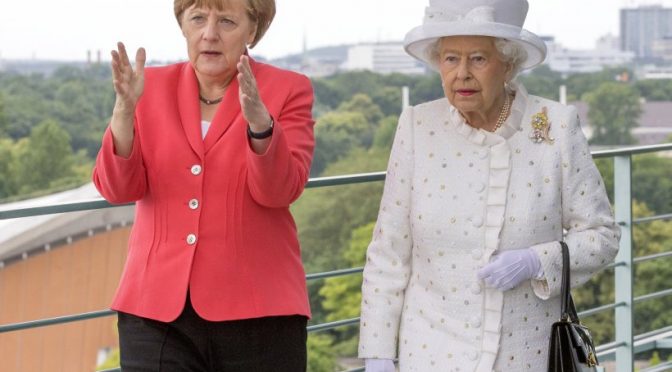 This editorial appears in the July 24, 2015 issue of Executive Intelligence Review.
July 16—It was Queen Elizabeth II personally, who ordered German Finance Minister Schäuble’s virtual murder of the nation of Greece in Eurozone debt-summit negotiations over July 12-13.

The Greek debt negotiations had been proceeding in June. Germany’s demands against Greece were much more moderate at that time, according to an AP wire of today carried in the New York Times. But then, those negotiations were adjourned on June 26, to await the results of the Greek referendum which was held on July 5. (In that referendum, Greeks overwhelmingly rejected the austerity demands of Germany and the Eurozone countries.)
Now during just the same period the negotiations were interrupted, Britain’s Queen Elizabeth made a rare state visit to Germany over June 23-26, and met there with Chancellor Angela Merkel, among others. It is not known at this time whether she also met with German Finance Minister Wolfgang Schäuble. But on June 25, during the Queen’s visit, Chancellor Merkel complained that Greek negotiations had “lost ground,” and Schäuble warned that the sides were moving apart.

Then, last Saturday, July 11, on the eve of the summit which resumed the broken-off negotiations, Schäuble and the German delegation showed up with new demands, the “toughest ever,” which even their allies said “came out of the blue,” AP reports. One summit participant “said that the extra demands were immediately perceived as provocative.” Schäuble had received and carried out the Queen’s orders. He even demanded that Greece be thrown out of the eurozone. Although Greece was not thrown out at that time, the violations of sovereignty and genocidal conditions were so brutal that they amounted to Greece’s murder.
“This makes it very clear,” Lyndon LaRouche said today. “Schäuble is barking for the Queen.”
Yet Schäuble was still insisting on a Greek exit from the Euro today, even after Greece had signed on to his diktat. “And he’s going to get the exit he wants,” said LaRouche. “It’s obvious he’s going to get an exit. And that’s when Greece will go to Russia. And once they go to Russia, at that point what will happen is that the European continental region will go into a spin-dive downward. And that will then shape everything.
“This is where the British are counting on Obama, to set forth a casus belli, which will actually be a British casus belli. Saving the situation will be the pretext for the war. Russia will get an ultimatum: either you submit to us, or we will go to war with you. The British will create a confrontation between Russia and the Presidency of the United States, and Obama, the President of the United States, will go to war with Russia.
“That’s the scenario. And the game against China, is part of the same pattern. The case is clear. The question is: who’s got the guts to face the reality? And there are very few people who have the guts to face that reality. Because, what’s going to happen, is that suddenly the institutions of the United States government, will then launch war.
“What Schäuble has done on the Queen’s orders, will be part of the pretext. The British Empire’s policy will be, then, to get the United States to launch warfare against Russia. For which Russia will be prepared. It means the extermination of much of the human species, but the British Empire wants to reduce much of the human population anyway.
“But that’s the reality. Let’s see what kinds of guts and brains people may have. Because there’s nothing else we can do beyond that. We’ve got to make that the challenge,” LaRouche concluded.
EIR

A Turn of the Key in the Presidential Campaign

This article appears in the July 24, 2015 issue of Executive Intelligence Review.
by Daniel Burke
[PDF version of this article]
July 20—When you hear your fellow human being announce imperiously, “Our fate is sealed,” how do you respond? Do you sink back, allowing the statement to hang in the air, this blasphemous notion that the sublime creative force of human society has finally been explained away? Or do you rise to the standard of basic decency, to defend your species?
And once you’ve risen, what is required of an individual who seeks to represent the human species in the effort to defeat a Zeusian “fate?” What Promethean quality can deliver us across the unbridgeable chasm between this era and the next?
The morning of Monday, July 13, 2015, I sat with my LaRouche PAC colleague Judy Clark in a darkened auditorium in New York City. Hillary Clinton, known at the beginning of that speech as the “inevitable” winner of the Democratic nomination for United States President, had gathered the international press and a small group of students at The New School in Manhattan’s Greenwich Village in order to present her intended economic policy to the nation for the first time. Several hundred people sat together listening to Senator Clinton, but I believe that none were more anxious than Judy and I. We hoped that Senator Clinton would have the insight and courage to address the most critical political process underway in the United States: the advancement of Glass-Steagall in the United States Senate, reintroduced as a bill on Tuesday, July 7th by Senators Elizabeth Warren, John McCain, Angus King, and Maria Cantwell.

Like many others in the audience, I knew the importance of the timing of the Warren bill, S. 1709, the existence of which was announced in the midst of the horrific collapse of the European financial system made evident by the murderous attacks on Greece by the craven team of Merkel and Schäuble and their current mistress, the British Queen. Unlike the other audience members, however, I had been present at a LaRouche PAC Town Hall in Manhattan on Saturday, July 11th, and I had heard Lyndon LaRouche say to his movement, in response to the actions of the four Senators:

“The time has come to win, not to complain, but to win: The chance is now. We have to make it now.”

Hillary Clinton did not speak the words, “Glass-Steagall,” in her speech that morning, so I did. I rose to my feet as her speech came to a close, and I simply asked her, “Senator Clinton, will you restore Glass-Steagall?” She refused to meet my eyes, and refused to make any comment in response, so I asked again several times, each time with greater volume. The photographers in the center aisle began snapping photos, and security came to escort me out of the building.
Within moments, my question was reported around the world. I was quoted in interviews as a representative of Lyndon LaRouche’s movement. That afternoon an economic adviser to Hillary Clinton, former Federal Reserve official Alan Blinder, was quoted in a Reuters news wire declaring, “You’re not going to see Glass-Steagall,” and claiming to have recently consulted with Hillary on exactly this question. Later, a second unnamed Clinton adviser contradicted Blinder, saying “Nothing is off the table,” but the damage had been done.
The presidential campaign, and thus history, had been changed. Clinton’s credibility was erased. In refusing to respond to a basic principle of decency,—and in announcing her loyalties, through Blinder, to Obama and Wall Street,—she had doomed her current Presidential campaign.
Wednesday evening July 15 Senator Warren called on all Democrats to join her in restoring Glass-Steagall. Thursday, the same publication that had interviewed me on video the day of the intervention interviewed Democratic Presidential candidate Martin O’Malley, asking for his response to the question. O’Malley reiterated his stated position in favor of immediate restoration of Glass-Steagall. Friday, Newsweek published an article by Robert Reich, political economist and former U.S. Secretary of Labor under President Bill Clinton, decrying Hillary’s actions. That same day, Obama’s press secretary, Josh Earnest, was asked directly whether the President would support the move by Warren and her colleagues to restore Glass-Steagall. Of course he answered negatively, saying effectively, “We’ll stick with Dodd-Frank.”
Saturday morning, the New York Times announced that Senator Bernie Sanders had become the fifth co-sponsor of Senator Warren’s 21st Century Glass-Steagall Act, and publicly challenged Clinton with the same question I had asked. They referred to a “heckler” in the audience of Clinton’s New School speech. By Monday July 20, the City of London’s Financial Times was forced to trot out Wall Street gremlin Barney Frank to attempt damage control.
Lyndon LaRouche’s method of transforming history is so much more powerful than most of us are willing to admit to ourselves. No “fact” will shape the future of the Presidency of the United States. No statistic will walk in the door and end the British Empire. No war is won on the basis of a pre-defined schedule. The option to win a global victory of man, to graduate to our galactic destiny, lies within our grasp.
EIR

4 thoughts on “Murder on the Queen's Orders”