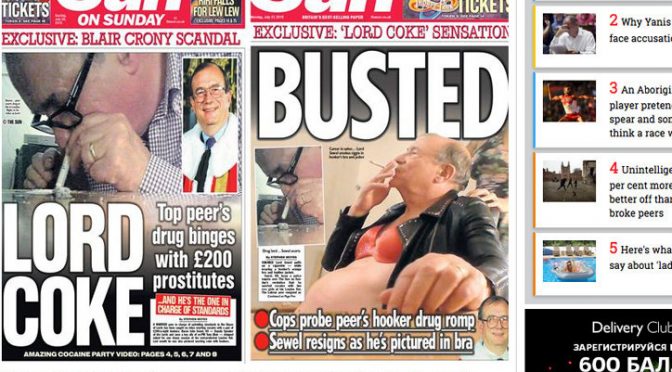 After being caught snorting cocaine on a video, the Lord Deputy Speaker Sewel was forced to resign before the whole House of Lords crumbles, and by extension, the Monarchy itself from devastating pedophilia, bank interest rigging, and the latest Nazism scandals hitting the Oligarchy for the last few years.

These people we thought to be some of extraordinary breed turn out to be just another low life scoundrels bereft of self respect. This one particular guy is just another paid whore of the Monarchy.
One thing we noticed though of this video is that it’s been released by the Sun, the same news outlet that revealed the video of the Nazi British Queen just days prior.
Talk about a systematic taking down of the Khazarian Cabal, right?

Scotland Yard has been called in to investigate the deputy speaker of the House of Lords after a video emerged of him allegedly snorting cocaine with prostitutes.
Lord Sewel resigned from his £84,500 per year post after the video was leaked to the Sun newspaper and published in an expose on Sunday.
The Prime Minister backed his decision to resign amid “very serious allegations”.
“I think it’s right he has stood down from his committee posts and I’m sure further questions will be asked about whether it is appropriate to have someone legislating and acting in the House of Lords if they have genuinely behaved in this way” Cameron said.
“It’s still going to take some time I suspect to get to the full truth.‎”
Sewel, 69, is facing calls to quit parliament altogether, and he could become the first peer to be expelled under new rules he was instrumental in implementing.
Police proceeded to search Sewel’s flat, entering the property with sniffer dogs and exiting with bags of evidence, according to media reports.
So far no arrests have been made, police said.
“A warrant under Section 23 of the Misuse of Drugs Act 1971 was today granted at Westminster Magistrates’ Court,” Scotland Yard said in a statement. “The warrant was executed at 6 pm at an address in central London by officers from the Special Enquiry Team of the Homicide and Major Crime Command.”

The footage show’s Sewel naked with two women at his apartment in Dolphin Square, a luxury residence close to parliament. Flats in the block, which are popular among MPs and Lords, are also being investigated as part of the inquiry into alleged historic child sex abuse.
The video shows the Lord snorting white powder, which the paper alleges to be cocaine, from between the breasts of a prostitute using a five pound note, which a different shot shows Sewel wearing a bra and leather jacket while smoking a cigarette.
He is further believed to have paid one of the women £200 for the night.
Lord Speaker Baroness D’Souza said: “Today’s revelations about the behavior of Lord Sewel are both shocking and unacceptable. Lord Sewel has this morning resigned as chairman of committees.
“The House of Lords will continue to uphold standards in public life and will not tolerate departure from these standards.
“These serious allegations will be referred to the House of Lords Commissioner for Standards and the Metropolitan Police for investigation as a matter of urgency,” her statement read.
Sewel could be expelled under the House of Lords Suspension and Expulsion Act 2015, which was given Royal Assent in March. The Act states peers may be barred if they do not stick to a strict code of conduct, and that they must “always act on their personal honor.”

The Lords Privileges and Conduct Committee, which Lord Sewel chaired before the video emerged, will decide on a punishment after the Lords Commissioner for Standards Paul Kernaghan has gathered evidence.
Police sources noted that drug allegations were difficult to investigate with only video evidence rather than physical substances.
Labour MP John Mann said Sewel should resign from the Lords before he is forced to go.
“He chaired the committee that makes the decisions on discipline. It was his committee,” the MP for Bassetlaw said.
“He cannot possibly go in front of his own committee and expect a serious hearing.

“He is a disgrace. He should retire and resign immediately.

“A lifetime ban would be the committee’s only option. He needs to save them and himself further embarrassment and go now.”
RT