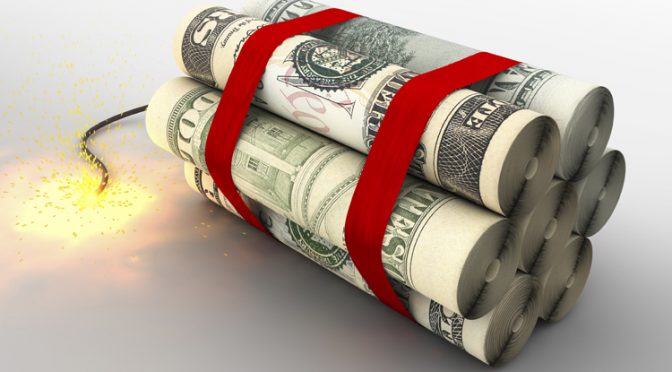 The glorified usury system of the West has superheated past its boiling point and is ready to explode.

Financial instruments of false value amounting to multiple trillions of US dollars that are currently intoxicating the global economy are ready to vaporize.
China has been in the process of unleashing its Western treasury bonds in favor of harder currencies like gold, oil, real estate and exotic technology. When investing becomes gambling, bad endings follow. The next credit crunch could make 2008-09 look mild by comparison. Bank of International Settlements(BIS) data show around $700 trillion in global derivatives.
Along with credit default swaps and other exotic instruments, the total notional derivatives value is about $1.5 quadrillion – about 20% more than in 2008, beyond what anyone can conceive, let alone control if unexpected turmoil strikes.

The late Bob Chapman predicted it. So does Paul Craig Roberts. It could “destroy Western civilization,” he believes. Financial deregulation turned Wall Street into a casino with no rules except unrestrained making money. Catastrophic failure awaits. It’s just a matter of time.

Ellen Brown calls the “derivatives casino…a last-ditch attempt to prop up a private pyramid scheme” – slowly crumbling under its own weight.

For years, Warren Buffett called derivatives “financial time bombs” – for economies and ordinary people.
Unless collateralized or guaranteed, their worth depends on the creditworthiness of counter-parties. Earnings on derivatives are “wildly overstated,” Buffett explains – because they’re “based on estimates whose inaccuracy may not be exposed for many years.”
When corporate bosses ask financial executives how profits look in any quarter, they, in turn, ask how much do you want, then manipulate things to oblige when told.
Since 2008, too-big-to-fail banks consolidated to much greater size than ever. They’re financial and political powerhouses controlling world economies to their own advantage.
Civilization’s only hope is smashing them – dismantling them into small, impotent pieces, or ideally putting money back in public hands where it belongs.
It’s too important to be privately controlled. Financial predators entrap small/weak nations into unrepayable debt peonage like Greece, bleed them dry, and thirdworldize developed ones into dystopian backwaters – while they grow richer and more powerful than ever ahead of the whole corrupt system going bust, decimating billions worldwide in greater human misery than already.
Washington Post editors support what demands condemnation. Don’t worry, be happy, they say. On July 23, they headlined “The Fed’s stance on banks and capital makes good sense.”
Half-intelligent economics students know better. The Wall Street owned, controlled and operated Fed is the problem, not the solution. Monied interests buy politicians like toothpaste. They write business friendly legislation, getting Congress to pass it in return for generous campaign contributions and other special favors.
America’s economy and financial system are house-of-cards disasters waiting to happen. Not according to WaPo editors.
“(T)he US financial system has made significant progress toward being less bailout-prone since” the dust settled on the 2008-09 crisis, they said.

“(B)ig banks are considerably better capitalized than” half a decade earlier – enough to “withstand (another) ‘Great Recession.”

The source: The Wall Street controlled Fed’s last ‘stress test’ assessment made public in March – ignoring the monstrous derivatives ticking time bomb weighing them all down along with the entire financial system.

A casino culture of anything goes persists. When counter-parties don’t have funds to pay on demand, bubbles begin deflating. It’s just a matter of time before current market mania ends.

Stephen Lendman lives in Chicago. He can be reached at [email protected].  His new book as editor and contributor is titled “Flashpoint in Ukraine: US Drive for Hegemony Risks WW III.”  http://www.claritypress.com/LendmanIII.html  Visit his blog site at sjlendman.blogspot.com.  Listen to cutting-edge discussions with distinguished guests on the Progressive Radio News Hour on the Progressive Radio Network. It airs three times weekly: live on Sundays at 1PM Central time plus two prerecorded archived programs.
Global Research
For failing to fulfil its commitments to and for using the Collateral Accounts of the East for its own globalist ambitions, the West is about to hear the loudest and most destructive explosion of its economy anytime soon.
When that happens the ignoramuses will panic, but those in the know will take over the reigns of power to restore order. There will be hardships at the beginning but conditions will improve once a new system is put in place.
The Chinese people have, all this time, shown the world how collective labor and sacrifices can improve their economy. Now, they are more than ready to use the capitalist own weapons against it.
The whole journey is all part of a greater education for everyone; lessons needed to be learned before we can classify ourselves to be part of a thriving civilization.

One thought on “The $1.5 Quadrillion Time Bomb”