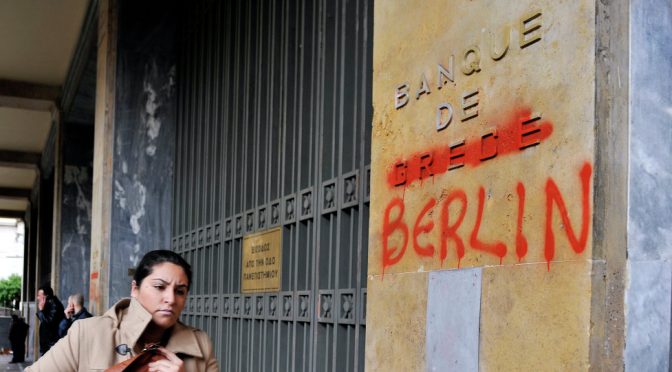 Here’s one more proof that the whole financial system is one big swindle.
The paper-based monetary system started with nothing, literally. It came into life just by virtue of an imposed agreement. Played with rosy promises, the whole system was put into action  with deliberately complex layers of paper shuffling and mind-numbing plethora of financial gobbledygook to cover its empty, shallow foundation.

When a country borrows money from a global  “development bank”, the finance minister won’t be coming home with crates of printed money, or tons of gold, to back up the subsequent money printing. The minister will be travelling home with a mutually signed paper giving instructions on how the borrowed sum plus interest would be paid in full before the next borrowing will be entertained.
Normally, one would expect to have borrowed something of value which would then be repaid with something of much greater value, but it doesn’t work that way. The whole fiat system is based on a complex system of projecting value in order to gain real value from your blood, sweat and tears.
When our finance minister went home with a paper instruction to pay, the actual payment of real value will then come from the actual hard asset that the people has built, e.g. bridges, airports, sea ports, roads and highways, out of the borrowed perceived value, i.e. loan, paper money, and bonds. Any income from decades of collecting toll from every commuter, or users of such endemically constructed facilities will go to the issuer of the paper instructions, i.e. the bank.
This simple scheme has been replicated worldwide for centuries through incorporation, treaties, and closed door trade agreements. And due to having born with it already in place, we normally think that the existence of the whole system is just normal and even natural as the next morning’s sunrise.

We have learned to accept things as condemnable as the current financial system to be the result of the normal course of things because every institution that lives and breathe within the system says so. That’s how malleable our mind really is.

And when a borrower nation could not pay the loan principal and corresponding interest, i.e. percentage charges for using the system’s valueless paper instruments [principal], it must unload itself of its sovereign assets to pay for arrears. This is a standard requirement before the borrower can borrow again from the lenders valueless instruments, more precisely, to be permitted to print debt-based currency.

Worse, they can manipulate the interest rates at will so that they could benefit even further while their clients bleed even more.

This is what’s happening in Greece and elsewhere…

The German government, which has taken a hard line on Greece, has saved some 100 billion euros ($109 billion) in the country’s financial crisis thanks to lower borrowing costs, a study has found.

Germany saved through lower interest payments on funds the government borrowed amid investor “flights to safety,” the German-based non-profit Halle Institute for Economic Research (IWH) said in its paper published Monday.
“These savings exceed the costs of the crisis – even if Greece were to default on its entire debt,” the study said. “Germany has clearly benefited from the Greek crisis.”
In the face of turmoil, investors seeking a safe haven for their money within the euro zone turned to export champion Germany, which “disproportionately benefited” from that during the debt crisis, the IWH said.
“Every time financial markets faced negative news on Greece in recent years, interest rates on German government bonds fell, and every time there was good news, they rose.”
Germany, the euro zone’s effective paymaster, has demanded fiscal discipline and tough economic reforms in Greece in return for consenting to new aid from international creditors, Agence France-Presse reported.
Finance Minister Wolfgang Schaeuble has opposed a Greek debt write-down while pointing to his own government’s balanced budget.
The balanced budget, however, was facilitated largely by Germany’s interest savings amid the Greek debt crisis, according to the study. The estimated 100 billion euros Germany saved since 2010 accounted for more than 3% of GDP, according to the IHW.
“Even if Greece doesn’t pay back a single cent, the German public purse has benefited financially from the crisis,” said the paper.
At the same time, the bonds of other countries – including the United States, France and the Netherlands – also benefited, but “to a much smaller extent.”
Greece and its creditors are working on the draft of a new bailout of up to 86 billion euros ($94 billion) in exchange for further reforms, AFP reported. They are aiming for a deal before Greece must repay 3.4 billion euros to the European Central Bank on August 20.
Sputnik
One would then ask why do we have to go abroad to borrow nothing, i.e. permission to print money, when we can construct these critical facilities on our own, using home grown materials and know-how?
Of course, we can. We just need to agree on all the details, i.e.:

We can do and establish a separate system. But we need to armed ourselves first because all those who have attempted to do so are now dead.

You would think that this hypnotic scheme would not go unperturbed by our smartest leaders but they are part of the whole game. They are already living and breathing within it. Breaking from such well entrenched, well defined scheme takes a whole lot of courage and self-sacrifice, and most of these people don’t know how to survive off-grid.

Therefore, you alone can set yourself free from it all. You alone can pull yourself from the whole control structure and move into real freedom.
Or, we can collectively eliminate all of them and regain control of the whole system. Those are the choices.

3 thoughts on “Germany Made 100 Billion Euros from Greek Crisis”