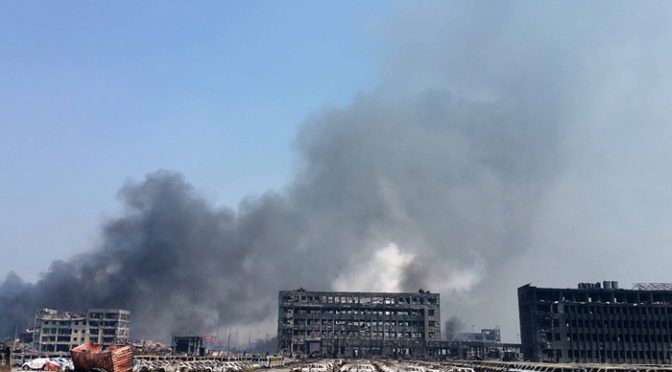 Relevant to what just happened in Tianjin China, here’s a a short yet scholarly written observation of the close relationship between financial and military warfare. What is the relationship between war in a military theater and “economic warfare”?
An act of war is invariably an economic undertaking which supports dominant corporate interests. The conduct of US-NATO military operations is carried out on behalf of powerful financial institutions.
US led wars in the Middle East under the humanitarian mantle of the “global war on terrorism” largely serve the interests of Wall Street, the Anglo-american oil conglomerates, the so-called ‘defense contractors”, the biotech conglomerates (Monsanto et al), Big Pharma and the corporate media.
But modern warfare is by no means limited to the sphere of military and intelligence operations. Washington not only imposes economic sanctions on countries which do not support its imperial agenda, it also fosters the outright destabilization of national economies. While the Pentagon and NATO coordinate military operations against sovereign countries, Wall Street carries out concurrent destabilizing actions on financial markets including the rigging of the oil, gold and foreign exchange markets directed against Russia and China.
It’s called “financial warfare”, it’s part of the same global agenda, it’s implemented alongside and in coordination with the Worldwide deployment of the US-NATO’s military machine.
In this regard, Obama’s “Pivot to Asia” directed against China involving the deployment of US naval forces in the South China Sea, is reinforced through concurrent destabilizing actions on the Shanghai stock exchange. The ultimate intent is to undermine –through non-military means– the national economy of the People’s Republic of China.
War and Financial Warfare
Is financial warfare coordinated with political decision-making pertaining to major military and intelligence operations?
Acts of financial warfare require intelligence;  they often require consultation and coordination at the highest levels of government. While the decision making process between the military-intelligence apparatus and the corporate financial system is by no means integrated, it nonetheless overlaps through a system of cross appointments and consultations.
Overlapping appointments
Amply documented, the mega-banking institutions on Wall Street and their related hedge funds exert their influence at the highest levels of the US government including the State Department, the Pentagon and the White House. The system of cross-appointments together with corporate lobbying is part of this process.  National security advisers and former Pentagon officials are appointed to the World Bank,  etc.  Former prime ministers, senior government officials take on consulting positions with major banking institutions,  CIA officials are involved as advisers in key trade negotiations, etc. Conversely, Wall Street bankers are appointed to key positions in government.
In early August, Goldman Sachs appointed NATO’s former Secretary General Anders Fogh Rasmussen as a financial consultant.
Over the last five years (2009-2014), Rasmussen was actively involved in coordinating NATO’s humanitarian bombing raids in the Middle East not to mention NATO military deployments on Russia’s doorstep in Eastern Europe, the Baltic States and the Black Sea.
During his stint as Prime Minister of Denmark (2001-2009), Rasmussen was involved (under a neoliberal policy agenda) in dismantling Denmark’s welfare state alongside the privatization of state assets.
Rasmussen’s consulting advice will be used as part of Goldman’s political lobbying in the EU, namely the process of influencing political and strategic decision making.
Moreover, Goldman’s multibillion dollar investment decisions, its inside trading operations, its various speculative actions on the commodities, forex, precious metals markets, etc, require detailed inside information/ political coordination pertaining to geopolitical and military affairs.
Rasmussen joins a long list of  prominent officials and political personalities who are acting as consultants for Goldman Sachs.
Mayor of Chicago Rahm Emanuel who was Obama’s Chief of Staff, was also consultant to Goldman. His role “was to “introduce us to people”, in the words of one Goldman Sachs partner at the time.”
Peter Sutherland who was EU commissioner, trade negotiator and subsequently Director General of the World Trade Organization (WTO) was appointed in 2005 to Goldman Sachs as a non-executive Chairman. He ended his 20 year stint with Goldman in 2015.
Robert Zoellick, former president of the World Bank joined Goldman Sachs in 2013 as chairman of the bank’s board of international advisers. Zoellick had previously held several high ranking positions in the US administration. He was Deputy Secretary of State (2005–2006) under the Bush administration. Goldman Sachs is a Trojan Horse with its former banking officials deployed in key governmental positions.  These appointments provide Goldman Sachs with the ability to influence and oversee the conduct of macro-economic policy.

Moreover, their former officials will provide them with inside information emanating from within the governmental structure. –i.e market rigging by major financial institutions will invariably require advanced knowledge regarding actions or decisions taken  within the government and military-intelligence apparatus.
Regulating The Next Wall Street Financial Crash
This is a timely appointment. Financial markets including the multi-trillion trade in derivatives are in a state of disarray. They are exceedingly unstable, largely as a result of market rigging and speculative activity by powerful actors, not to mention the lack of regulatory procedures.
Goldman Sachs Inc. played a central role in the 2008 financial meltdown, with their former chairman and CEO Henry Paulson in charge of the US Treasury.
In a bitter irony, Institutional speculators  are in charge of regulating financial markets. The next financial crash, were it to occur, will be be “regulated” by the SEC with former Goldman Sachs official Andrew J. “Buddy” Donohue in the driver’s seat, acting on behalf of a handful of “too big to fail, too big to jail” financial institutions.
Let us not despair: Goldman Sachs does not control the US Treasury.  It’s in the hands of a former Citigroup official Jacob Lew -who according to expert opinion is slated to act “responsibly” in the case of a stock market crisis. During his stint at Citigroup which preceded the 2008 financial crisis, Lew was in charge of a speculative hedge fund investment unit which consisted according to a 2010 Huffington Post Report in shorting or betting “on the housing market to collapse.”:

[Concern was expressed when he was appointed Budget Director regarding] his unit’s investments in a hedge fund that bet on the housing market to collapse — a reality suffered by millions of American homeowners.  … But in an age in which the housing collapse led to a financial upheaval that cost 8 million American jobs and plunged the nation into its deepest recession since the Great Depression, bets [coordinated by Jack Lew] that profited off the collapse may not be perceived in the best light.

It is worth noting that Treasury Secretary Jack Lew was also involved in what is best described as “legal tax evasion” through the transfer of Citigroup funds to the Cayman islands. According to the Weekly Standard (February 2013), Jack Lew:

“oversaw as many as a hundred Cayman Island investments when he worked at Citi Bank as chief operating officer of the alternative investment services unit, SEC disclosures reveal. It has previously been reported that Lew himself had been invested in a fund that was based in the Cayman Islands.  …
SEC documents ending in the year 2007 reveal that at least 90 subsidiaries of Citi were based in the Cayman Islands. A couple weeks later, in January 2008, Jack Lew took the high-ranking executive job at Citi.
Names of the Citi subsidiaries include: Asia Mortgage Finance, Azabu Credit Management Company Ltd., Alternative Investments MGR, Ltd., Asia Enterprise III Offshore L.P., Baltic Pharma Limited, BISYS Hedge Fund Director Services Limited, Brennan Limited, and many, many more.
By the end of 2008 that number of Citi subsidiaries in the Cayman Islands, which fell under the jurisdiction Lew was in charge of, jumped to 113.
In the 2012 presidential campaign, the Obama campaign called Mitt Romney’s own Cayman Island investments “bets against America.”
But only months after the election ended, Obama nominated his former chief of staff Jack Lew, who himself had similar investments and even oversaw investment funds there, to be the next treasury secretary.
When asked this morning [February 13, 2013]  at a Capitol Hill hearing about his investment in the Cayman Islands-based fund, Lew plead ignorance. He claimed today that he “actually didn’t know” the fund he invested in was housed in the Cayman Islands. Besides, he said, my “benefit was really very small.”

Financial Meltdown. Could it happen Again?
Who are the main actors?
We are dealing with a complex process of rigging and manipulation. This article has skimmed the surface focussing on selected key appointments on behalf of Wall Street’s mega banks.
Let us address the issue of so-called “fiscal responsibility”:
A speculator and tax evader (Jack Lew) is in charge of fiscal and monetary policy at the US Treasury and the regulation of major US stock markets at the Security and Exchange Commission (SEC) is in the hands of Goldman Sachs, which also means that the SEC cannot be used to indict Goldman Sachs, CitiGroup et al. on charges of inside trading and financial fraud.
globalresearch.ca