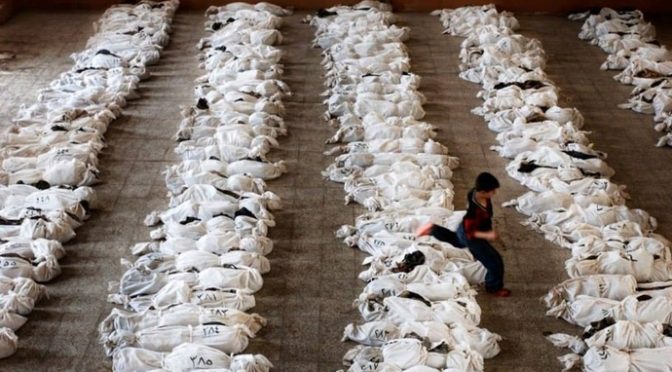 The report has been used as justification for the US and UK’s allegations that the attack originated from the Syrian government, but it does not in fact reach this conclusion. The inspection team’s mandate was limited to determining if an attack took place, not where it originated from, limiting their findings to a simple statement of fact…

Two Years Ago: How the Syrian Chemical Weapons Videos Were Staged August 21, 2013: Obama’s insidious and criminal objective in August 2013 was to use these attacks with a view to justifying a humanitarian war against Syria.
This GRTV report was first broadcast in September 2013 in the month following the East Ghouta Chemical Attacks
In the wake of the Syrian chemical weapons attack, shocking footage of the victims of that attack were widely circulated in an effort to raise the ire of the public and spur support for military intervention.
Now, a new report on that footage finds troubling inconsistencies and manipulation with the video that calls the official narrative of the attack and its victims into question.
This is the GRTV Backgrounder on Global Research TV.

By Global Research News
by Oriental Review
The situation in Syria is still in focus of the world media. Another U.S.-led “humanitarian intervention” may be unleashed soon. The Pentagon announced that it is ready to attack Syria in order to punish Bashar al-Assad and Syrian army for the alleged use of chemical weapons against the civilians.
Meanwhile, the new evidence of the U.S. intelligence being involved in chemical attack near Damascus on August 21, 2013 has been leaked to Internet.
A hacker got access to the U.S. intelligence correspondence and published private emails of Col. Anthony J. Macdonald, who is the General Staff Director, Operations and Plans Office of the Deputy Chief of Staff for Intelligence the US Army Staff.
In an email exchange on August 22, 2013 with the US Army civilian analyst Eugene P. Furst congratulates Col. on successful operation and refers him to a Washington Post publication about chemical attack in Syria. E.FURST: By the way, saw your latest success, my congratulations. Good job.
A.MACDONALD: As you see, I’m far from this now, but I know our guys did their best.
Another set of private correspondence between his wife Jeniffer MacDonald and Mary Shapiro reveals that colonel did not keep his mouth shut in the bedroom: M.SHAPIRO: I can’t stop thinking about that terrible gas attack in Syria now. Did you see those kids? I was really crying They were poisoned, they died. When is it over? I see their faces when in sleep. What did Tony say you about this?
J.MACDONALD: I saw it too and got afraid very much. But Tony comforted me. He said the kids weren’t hurt, it was done for cameras. So you don’t worry, my dear.
M.SHAPIRO: I’m still thinking about those Syrian kids. Thanks God, they are alive. I hope they got a kind of present or some cash.
From Col. MacDonalds’s wife dialog with her friend it’s clear that the video with the children killed in the chemical attack near Damascus was staged by the U.S. Military Intelligence.
This information sheds new light on the US administration’s confession that “there were indications three days prior that an attack [on August 21] was coming”.
As Y. Bodansky from GIS/Defense & Foreign Affairs wrote on Sunday:

“On August 13-14, 2013, Western-sponsored opposition forces in Turkey started advance preparations for a major and irregular military surge. Initial meetings between senior opposition military commanders and representatives of Qatari, Turkish, and US Intelligence [“Mukhabarat Amriki”] took place at the converted Turkish military garrison in Antakya, Hatay Province, used as the command center and headquarters of the Free Syrian Army (FSA) and their foreign sponsors. Very senior opposition commanders who had arrived from Istanbul briefed the regional commanders of an imminent escalation in the fighting due to “a war-changing development” which would, in turn, lead to a US-led bombing of Syria.”

According to the same source,

On August 24, 2013, Syrian Commando forces acted on intelligence about the possible perpetrators of the chemical attack and raided a cluster of rebel tunnels in the Damascus suburb of Jobar. Canisters of toxic material were hit in the fierce fire-fight as several Syrian soldiers suffered from suffocation and “some of the injured are in a critical condition”.
The Commando eventually seized an opposition warehouse containing barrels full of chemicals required for mixing “kitchen sarin”, laboratory equipment, as well as a large number of protective masks. The Syrian Commando also captured several improvised explosive devices, RPG rounds, and mortar shells. The same day, at least four Hizballah fighters operating in Damascus near Ghouta were hit by chemical agents at the very same time the Syrian Commando unit was hit while searching a group of rebel tunnels in Jobar. Both the Syrian and the Hizballah forces were acting on intelligence information about the real perpetrators of the chemical attack.

The samples of toxic agents were reportedly sent to Moscow for a detailed analysis. 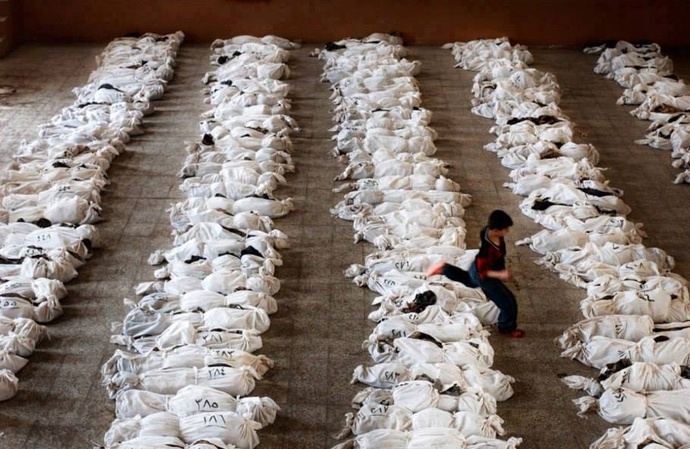 Published data clearly indicate that the US administration is about to create any pretext to launch a military strike on Syria. Most recent revelation that the US Secretary of State John Kerry has used a photo taken in Iraq in 2003 to illustrate “Syrian victims of gas attack” last Friday to justify his bellicous message to the US Congressmen gives even more evidence that  the “intelligence information” the warmongers claim to be based on is groundless or simply fabricated.
Now the vast majority of people worldwide perfectly understand that a kind of tricky game is being played on their behalf. The British parliament has already met the demand of clearly expressed public opinion and opposed the suicidal war over Mediterranean. Will the US legislators show us the same prudence and common sense? We will see it next week.
Copyright The Oriental Review 2013.
globalresearch.ca