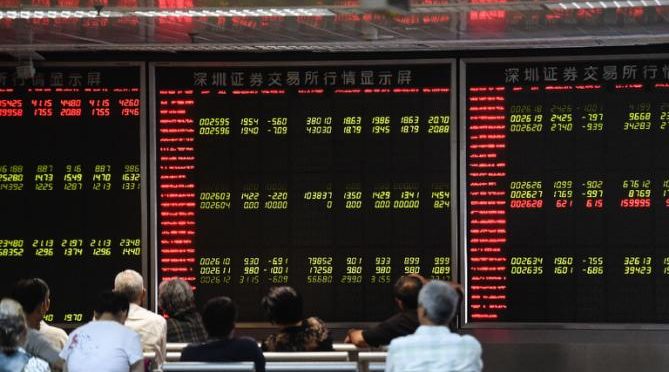 As we have been saying all along, China is not only planning but is already executing a carefully controlled exit from the fiat system and pave the way for a return to a financial system that is backed up with a basket of tangible sovereign currencies, e.g. gold, silver, natural gas, high quality export products.

This is, of course, in line with the global wide movement to get rid of the organized crime group from controlling all economies solely for its own whims and delusions of grandeur.

China has already dumped $100 billion of its $1 trillion of U.S. Treasuries this month and will continue to sell.  As the dollar weakens there will be a stampede by foreign investors to get rid of their Treasury holdings as well.  The combination of debt that can never be repaid and higher interest rates that no government can afford to pay will create an absolute panic in bond markets.  This will of course be very beneficial to gold, just as it was in the 1970s. KWN

The Euro Stoxx 50 Index had climbed as much as 22 percent this year before stalling. Then came August, which spurred a rout that wiped off as much as $8.4 trillion of equity values. Even optimism over European Central Bank stimulus wasn’t enough to keep the region’s shares afloat. Credit Suisse Group AG cut its year-end target on the Euro Stoxx 50 by 10 percent, and Goldman Sachs Group Inc. reduced its allocation to the equities. 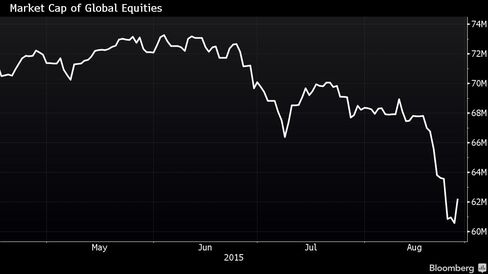 The biggest monthly surge in volatility since 2008 spurred a rush to hedge. The cost of bearish Euro Stoxx 50 options has jumped about 50 percent since Aug. 20, relative to bullish ones. Eight of the 10 most-owned contracts are bearish. Bloomberg

So far, the ongoing covert financial war has solicited at least two major kinetic attacks against chemical storage facilities recently, one of which was confirmed to be nuclear.
Since 2007, the western economy had already experienced two major meltdowns. The September payment deadlines are what everyone is watching out for.

“More than $5 trillion has been erased from the value of shares worldwide this month as China’s surprise devaluation of the yuan on Aug. 11 sparked concern the world’s second-biggest economy may be in worse shape than analysts had estimated. Bets on a September Fed rate increase climbed after Vice Chairman Stanley Fischer said on Friday there is “good reason” to believe inflation will accelerate.

“The markets are still digesting the China news and it seems that the uncertainty from China’s rollercoaster is not over yet,” said Guillermo Hernandez Sampere, who helps manage the equivalent of $167 million as head of trading at MPPM EK in Eppstein, Germany. “Any panic created out of this high volatility keeps investors out of the market. There’s still no clear message” on when the Fed will raise rates, he said. ” Bloomberg

Will September be the end of the fiat system of the Vatican and as a result should end mankind’s debt slavery?
Today’s stock markets are sliding towards  the red territory once again. Here are the latest headlines from Bloomberg

AFP – Monday, 31 August 2015
A financial journalist has “confessed” to causing “panic and disorder” on China’s stock market and inflicting “huge losses on the country”, state media reported on Sunday.
Wang Xiaolu, a journalist with Caijing magazine, was detained by Chinese authorities following China’s recent stock market crash.
Wang was held for fabricating and spreading fake information on securities and futures market, according to Xinhua, a state-run news agency.
According to the report, Wang “confessed” that his “false information” had “caused panics and disorder at [the] stock market, seriously undermined the market confidence, and inflicted huge losses on the country and investors”.
Wang wrote a story in July saying the securities regulator was studying plans for government funds to exit the market.
The China Securities Regulatory Commission (CSRC) quickly denied the Caijing story, labelling it “irresponsible”.
But Caijing said it “defended journalists’ rights to do their duty under the law”, according to a statement posted on its website.
Xinhua reported that authorities had also detained an official from China’s securities watchdog and four senior executives of the country’s major securities dealer for “stock market violations”.
Liu Shufan, an official with the CSRC was held on suspicion of insider dealings, taking bribes and forging official seals, said the report.
Liu “confessed” that he has forged official seals to fake a court ruling on divorce and taxation certificates for his mistress.
Chinese state media regularly carries what it presents as confessions of suspects in high-profile cases.
Formal arrest in China normally comes after some time in police detention, when the case is handed to prosecutors, with trial and conviction almost guaranteed.
The news agency also reported that 197 people have been punished in a special campaign by Chinese police targeting online rumours about China’s stock market, the recent fatal explosions in Tianjin and “other key events”.
No details of the punishments were given, but according to the report, the crimes punished included claiming a man had jumped to his death in Beijing due to the stock market slump, falsifying the number of people who had died in the Tianjin blasts, and circulating “seditious” rumours about China’s upcoming commemorations of the 70th anniversary of the end of World War II.
AFP
The Chinese government was not really arresting the said journalist for causing the crash [that was the full intention in the first place], but for telling the truth that “the securities regulator was studying plans for government funds to exit the market.”
China would have preferred to do this covertly. That’s the least she could do to not shame the outgoing Western Oligarchy even more. Oriental culture dictates that.