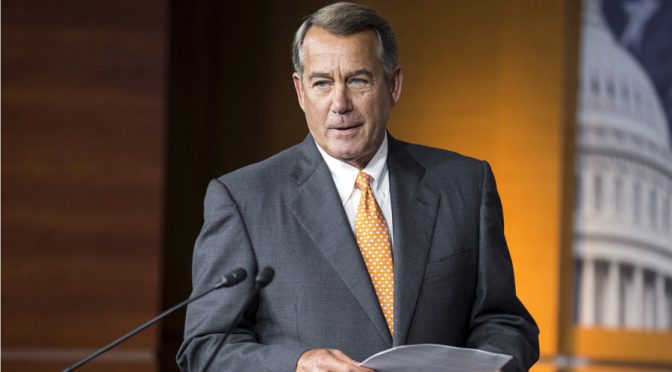 US House Speaker Boehner announced his resignation by October a day after listening to Pope’s socialist speech in Congress, not to mention the impending government shutdown days from now.

Boehner to resign as Speaker, quit Congress in October

Speaker of the House John Boehner has announced he would resign and give up his seat in Congress at the end of October.
Boehner, a Republican from Ohio, became Speaker in January 2011, following the midterm election that gave GOP the majority in the House of Representatives.
The announcement comes as Republicans square off the with minority Democrats over funding arrangements. The impasse threatens to cause a government shutdown on October 1.
In a statement released by an aide, Boehner said he would be resigning “for the good of the Republican Conference and the institution.”
The aide told reporters that the Ohio lawmaker had originally planned to leave at the end of last year, but decided to stay on after the House Majority Leader Eric Cantor, a Virginia Republican, suffered a shocking loss in the primaries.
“He didn’t give anyone a heads up. This was a complete surprise to all of us,” said Representative Darrell Issa, a California Republican, according to the Washington Post.
rt.com
We do hope everyone will follow suit.
Here’s the full Papal Speech at the US Congress: