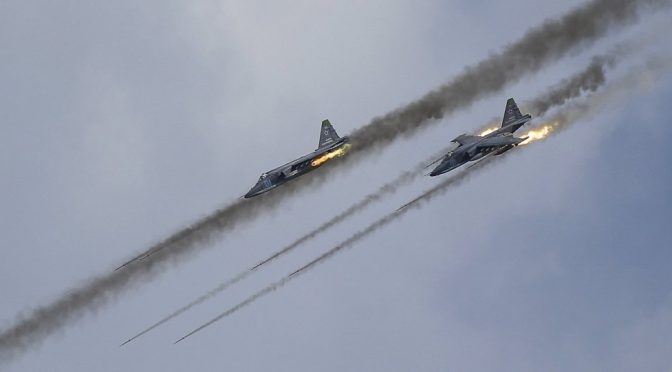 Here’s the latest airstrike video released by the Russians.

“We held a ministerial [UN] Security Council meeting yesterday. During the discussion, we heard different points of view… I believe that many perceived positively and with interest President Putin’s initiative on the need to create a broad anti-terrorism front that would be based on international law, the UN Charter, and that would act with the consent of and in close coordination with countries in the region,” Lavrov told reporters.
Below: ISIS HQ, command point, ammo depot destroyed in Russian military Syria night op

The footage shot by drones shows Russian airstrikes on ISIS infrastructure near Idlib and al-Latamna.
“A terrorist HQ and an ammunition depot were destroyed near Idlib, as were a fortified three-level command center near Hama,” he said. “A direct bomb hit also completely destroyed a workshop north of Homs that produced explosives and ammunition,” he added, saying that at this workshop terrorists were stuffing vehicles with explosives. Those vehicles were then used to conduct terror attacks.
The night sorties raise the number of targets hit by Russia in Syria in the first 24 hours of the operation to 12. read more

Russia has struck eight Islamic State (ISIS/ISIL) targets in Syria, the country’s Defense Ministry said, adding that “civilian infrastructure” was avoided during the operations.
“Today, Russian aerospace force jets delivered pinpoint strikes on eight ISIS terror group targets in Syria. In total, 20 flights were made,” spokesperson for the Russian Defense Ministry, Igor Konashenkov, said.
“As a result, arms and fuel depots and military equipment were hit. ISIS coordination centers in the mountains were totally destroyed,” he added.
Konashenkov said that all the flights took place after air surveillance and careful verification of the data provided by the Syrian military. He stressed that Russian jets did not target any civilian infrastructure and avoided these territories.
“Russian jets did not use weapons on civilian infrastructure or in its vicinity,” he said.
Earlier in the day, the Russian military announced the start of air operations in Syria in order to help the goverment fight terrorist forces. Syrian state television named at least seven areas targeted by the air strikes.
They included areas around the cities of Homs and Hama, which are 44 kilometers apart, according to various media reports.
The statement by the Defense Ministry refuted earlier reports about civilian casualties that Russian air strikes allegedly led to.
Reuters reported that Russia targeted opposition rebel groups in Homs province instead of Islamic State forces. The agency cited Syrian opposition chief Khaled Khoja, who put the death toll of the bombardment at 36 civilians.
“Russia is intending not to fight ISIL [Islamic State], but to prolong the life of [Syrian President Bashar] Assad,” Khoja said.
Similar claims were made by the BBC, Fox News, Al Jazeera and numerous other news outlets.
However, US Secretary of Defense, Ashton Carter, said that Pentagon can’t confirm these allegations, though NATO declared it was concerned by the reports that targets other than ISIS could have been hit.
READ MORE: Preemptive strike is how you fight terrorism – Putin on Syrian engagement
Moscow harshly criticized the reports, labeling them an information war.
“Russia didn’t even begin its operation against Islamic State… Russia’s Foreign Minister Sergey Lavrov didn’t even utter his first words at the UN Security Council, but numerous reports already emerged in the media that civilians are dying as a result of the Russian operation and that it’s aimed at democratic forces in the country (Syria),” Maria Zakharova, Foreign Ministry spokeswoman, told media.
“It’s all an information attack, a war, of which we’ve heard so many times,” she added.
Zakharova also said that she was amazed by the scale and speed of what she called “info injections” into social networks such as “photos of alleged victims” that appeared on the web as soon as the Russian operation began.
“What can I say? We all know perfectly how such pictures are made,” she said, remembering a Hollywood flick ‘Wag the Dog,’ which described the US media reporting on a fake war in Albania.
The spokesman urged the media, including, Western outlets “to turn to top officials in the [Russian] Defense Ministry press service to obtain all required information” about the country’s operation in Syria.
RT

Russia, of course, did not make any critical comments against US airstrikes while the US airstrikes were going on.
In deep contrast, Russia has intelligence coordination center in Iran which, contrary to the US airstrikes, has provided real-time ground based intelligence, too, from both Iranian and Syrian Armies.
No wonder the US airstrikes could not hit ISIS/L targets but keep miss-dropping into old targets where Obama claimed he had “ended two wars” as his enduring legacy to the American people. “We’ve ended two wars.” — Barack Obama, July 21, 2015, at a DSCC fundraiser held at a “private residence”
“Now that we have ended two wars responsibly, and brought home hundreds of American troops, we salute this new generation of veterans.” — National Security Adviser Susan Rice, May 20, 2015
“His presidency makes a potentially great story: the first African-American in the White House, who helped the country recover from recession and ended two wars.” — Dominic Tierney, The Atlantic, January 15, 2015, “America Will Miss Obama When He’s Gone”
Report from Airwars, August 2, 2015, detailing civilian deaths from continuous U.S.-led airstrikes in Iraq and Syria: American warplanes bombarded Taliban-held territory around the Kunduz airport overnight, and Afghan officials said American Special Forces were rushed toward the fighting. … The situation for the Afghan forces improved somewhat toward midnight: American warplanes conducted airstrikes at 11:30 p.m. and again at 1 a.m. on Taliban positions near the airport, an American military spokesman said. … Around the same time, soldiers with the American Special Forces headed out toward the city with Afghan commandos, according to Afghan government officials.

How do you know when you’re an out-of-control empire? When you keep bombing and deploying soldiers in places where you boast that you’ve ended wars. How do you know you have a hackish propagandist for a president? When you celebrate him for “ending two wars” in the very same places that he keeps bombing.
All of this, just by the way, is being done without any Congressional approval, at least with regard to Iraq and Syria. As my colleague Cora Currier noted when reporting on the Airwars report in August, these civilian deaths are “a reminder of the extent to which the United States’ air war in Syria and Iraq has rolled ahead with little public debate over its effectiveness. Congress has still not passed a specific legal authorization for the war.”
Russia today announced that its upper Parliament approved its own imperialistic intervention and bombing campaign inside Syria, and that legislative body was widely (and not inaccurately) derided by U.S. commentators for being what the New York Times called a “rubber stamp.” The Obama administration, by contrast, does not even bother with the empty ritual of Congressional approval for its bombing campaigns; the president proved he is even willing to bomb a country after Congress rejected his authorization to do so, as happened in Libya. Indeed, the one and only time Obama venerated the need for Congressional approval for bombing was when he was pressured to bomb the Assad regime for crossing his “red line” but did not actually want to do so; as Charles Davis put it today, “Obama only seeks Congress’ authorization when he doesn’t actually want to do something, as when Assad crossed his ‘red line.’”
Whatever else one wants to say about Iraq and Afghanistan, one cannot honestly say that Obama ended the wars in those countries. The U.S. continues to drop bombs on both, deploys soldiers in both, kills civilians in both, and engages in a wide range of overt and covert force, all without a shred of Congressional approval. Photo: U.S. soldiers inspect the site of a suicide attack in the heart of Kabul, Afghanistan, Saturday, Aug. 22, 2015. The suicide car bomber attacked a NATO convoy traveling through a crowded neighborhood in Afghanistan’s capital Saturday, killing at least 10 people, including three NATO contractors, authorities said.
theintercept.com
This is the reason why even Iraq is now contemplating of formally requesting Russia to help them repel ISIS/L, instead of asking the US military to do so.

In addition, Russia commits to follow precise airstrike timelines, and will not send any ground troops as much as possible, but will provide precise targeting capabilities for the Syrian Army. 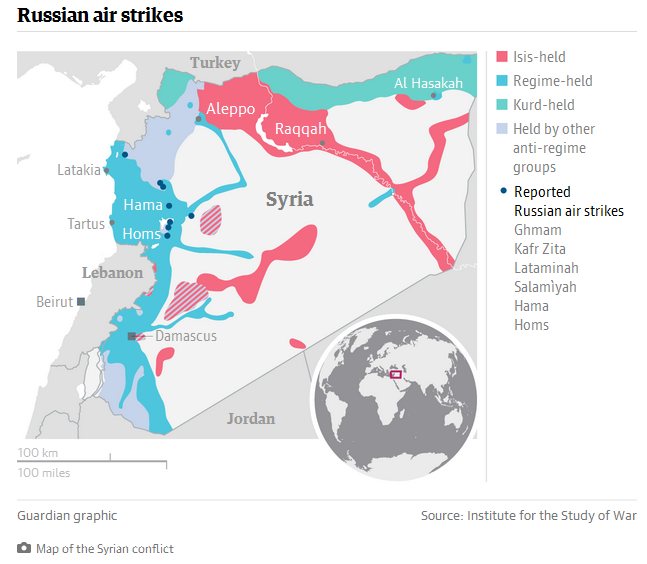 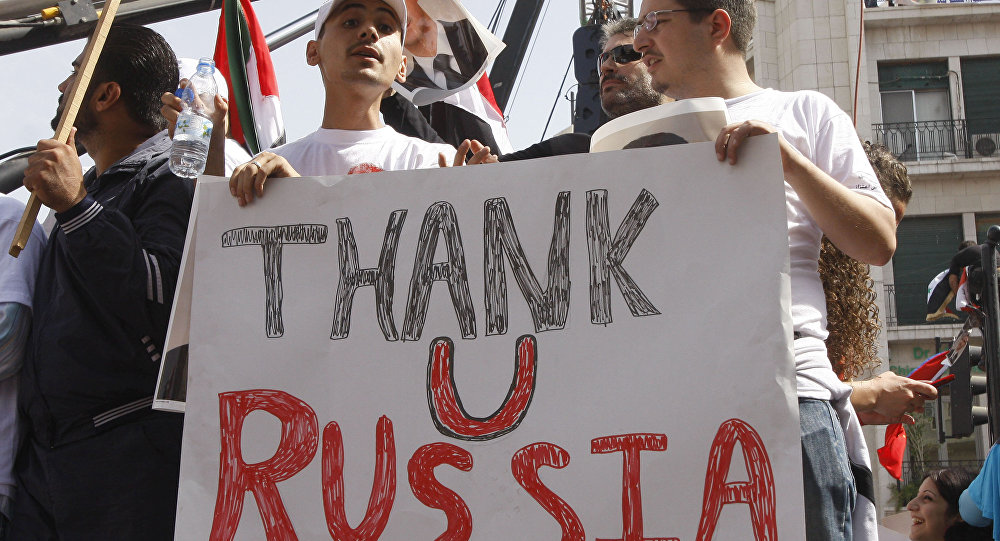 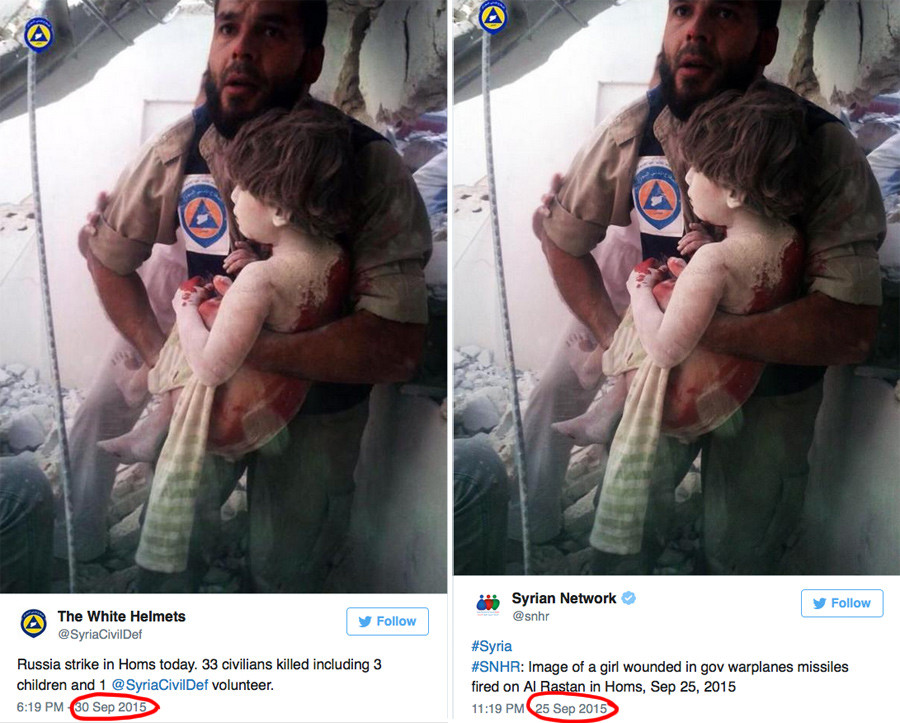 Look at the time stamp. The original picture was already posted week before the Russian airstrikes, afterwhich it was posted again blaming Russia for the fate of the child. Why can’t the US just stop fooling everyone?
The US military just can’t hide it’s full support for its own ISIS/L terror group anymore.