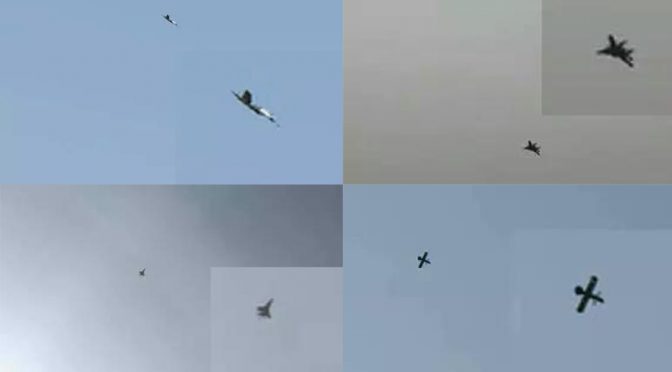 Finally, the Russians are launching airstrikes against ISIS/L targets that the United States purposely missed during their 5000+ air missions for the last several months.
The US forces are advised not to loiter around during the Russian air sorties.

By Andrew Osborn and Phil Stewart
MOSCOW/WASHINGTON Russia launched air strikes against targets in Syria on Wednesday in the Kremlin’s biggest intervention in the Middle East in decades, telling the U.S. air force to steer clear while its warplanes were in action.
Moscow’s assertion that it had attacked Islamic State was immediately challenged by Washington and by rebel sources in Syria.
A U.S. official said Moscow gave Washington just an hour’s notice of the strikes, which the Kremlin said were designed to help President Bashar al-Assad, its closest regional ally, push back Islamist militants.
Notice of the attack came from a Russian official in Baghdad who asked the U.S. air force to avoid Syrian airspace during the mission, U.S. State Department spokesman John Kirby said.
Russia and the United States offered conflicting accounts of which targets had been struck, underlining growing tensions between the two former Cold War foes over Moscow’s decision to intervene.
U.S. officials said targets in the Homs area appeared to have been struck, but not areas held by Islamic State.

So, the US did know where ISIS militants are hiding but could not give evidence they have shot one down during their own operations? Pathetic.

Areas of the province of Homs struck by the Russians are controlled by an array of rebel groups including several operating under the banner of the “Free Syrian Army”, activists, locals and rebels said. None of the sources named Islamic State as one of the groups operating in the areas hit on Wednesday.
The Russian Defense Ministry said however that its attacks were directed at Islamic State military targets. It said it had hit IS weapons depots, ammunition, communications infrastructure, and fuel.
The head of the Western-backed Syrian political opposition said the Russian strikes had killed at least 36 civilians and targeted areas where Islamic State and al Qaeda-linked fighters were not present.
According to a pro-Syrian government military source, there were “five strikes against five areas in Syria’s Homs”. He said other areas may have been bombed too.
The Homs area is crucial to Assad’s control of western Syria. Insurgent control of that area would bisect the Assad-held west, separating Damascus from the coastal cities of Latakia and Tartous, where Russia operates a naval facility.
Striking Homs and opposition groups but not IS showed the Kremlin’s primary aim was to prop up Assad, a French diplomatic source said.
Moscow’s intervention means the conflict in Syria has been transformed in a few months from a proxy war, in which outside powers were arming and training mostly Syrians to fight each other, to an international conflict in which the world’s main military powers except China are directly involved in fighting.
That raises the risks of military accidents between outside powers and raises pressure for a diplomatic solution, without making it any easier.
Russia joined the United States and its Arab allies, Turkey, France, Iran and Israel in direct intervention, with Britain expected to join soon, if it gets parliamentary approval.
PARLIAMENTARY VOTE
Russian jets went into action after the upper house of the Russian parliament gave President Vladimir Putin unanimous backing for strikes following a request for military assistance from Assad.
In a barely concealed jibe at Washington, a spokesman for Putin later said the vote meant Moscow would be practically the only country in Syria to be conducting operations “on a legitimate basis” and at the request of “the legitimate president of Syria”.
The last time the Russian parliament granted Putin the right to use military force abroad, a technical requirement under Russian law, Moscow seized Crimea from Ukraine last year.
Speaking after the strikes, Putin said the only way to fight “terrorists” in Syria was to act preemptively. Russia’s military involvement in the Middle East would only involve its air force and be temporary, he said.
One of the reasons for getting involved was the need to stop Russian citizens who had joined the ranks of Islamic State from later returning home to cause trouble, said Putin.
The Russian leader said he still thought the ultimate solution to Syria’s problems was political.
“A definitive and long-term solution in Syria is only possible on the basis of political reform and on the basis of dialogue between moderate forces in the country,” he said.
“I know that President Assad understands that and is ready for such a process. We are counting on his active and flexible position and on his readiness to compromise.”
A U.S.-led coalition has already been bombing Islamic State in Iraq and Syria. But Putin derided U.S. efforts on Monday in a speech at the United Nations, suggesting a broader and more coordinated coalition was needed to defeat the militants.
MILITARY BUILD-UP
“The military aim of our operations will be exclusively to provide air support to Syrian government forces in their struggle against ISIS (Islamic State),” Sergei Ivanov, the Kremlin’s Chief-of-Staff, said before reports that the strikes had begun.
Russia has been steadily dispatching more and more military aircraft to a base in Latakia, regarded as an Assad stronghold, after the Syrian government suffered a series of battlefield reverses.
Moscow has already sent military experts to a recently established command center in Baghdad which is coordinating air strikes and ground troops in Syria, a Russian official told Reuters.
Russia’s involvement in Syria will be a further challenge for Moscow, which is already intervening in Ukraine at a time when its own economy is suffering from low oil prices and Western sanctions.
Opinion polls also show Russian voters have little appetite for a long campaign, with painful memories of the Soviet Union’s 1979-89 intervention in Afghanistan, in which thousands of Soviet troops were killed, still fresh.
But as Russian real incomes fall for the first time since Putin came to power, the spectacle of the country flexing its military muscles overseas, could also be a useful distraction for the Kremlin.
Ivanov said Russia was only acting to protect its own interests in Syria, where it maintains a Soviet-era naval facility at Tartous, its only access to the Mediterranean.
“We’re talking specifically about Syria and we are not talking about achieving foreign policy goals or about satisfying our ambitions … but exclusively about the national interests of the Russian Federation,” said Ivanov.
Ivanov declined to say which aircraft the Russian air force was deploying.
“The operations of the Russian air force can not of course go on indefinitely and will be subject to clearly prescribed time frames,” he said.
Russia’s decision to intervene in Syria was prompted by a panicky realization that the Syrian government was being turned over on the battlefield, diplomats and analysts have told Reuters.
When it saw several months ago that Syrian government forces were retreating on several fronts at a rate that threatened Assad, its closest Middle East ally, the Kremlin quietly decided to despatch more men, weaponry and armor.
(Additional reporting by Lidia Kelly, Daria Korsunskaya, Alexander Winning, Gabriela Baczynska, Vladimir Soldatkin, Maria Tsvetkova and Tom Perry and Mariam Karouny in Beirut, Sylvia Westall, Jean-Baptiste Vey in Paris, Will Dunham in Washington; Writing by Andrew Osborn; Editing by Giles Elgood)
reuters.com

One thought on “Russia Launches Air Strikes in Syria”