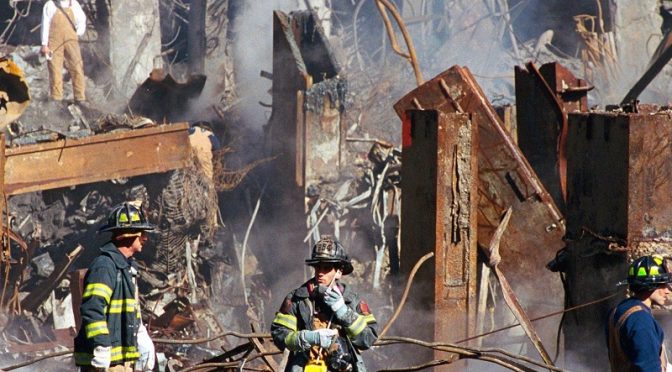 Another stupid worker from the US corporate government has just dismissed the case filed against Saudi Arabia for reason of state immunity.

“U.S. District Judge George Daniels in Manhattan said Saudi Arabia had sovereign immunity from damage claims by families of the nearly 3,000 people killed in the attacks, and from insurers that covered losses suffered by building owners and businesses.”
So, how would one country seek redress when it is attack by another country without invoking sovereign immunity when all countries are supposed to be entitled to immunity by default?
You attack them right off, like you did in Iraq and Afghanistan. Wait, those two countries never did anything harmful against the United States.
These people with patently twisted logic should not be allowed to run an office especially so when it is in the administration of justice. In its present form, there’s no justice in this government.
No amount of meditation could change the way things are.
It’s high time that we bring this unconstitutional corporate government down and burn the House of Saud, too.

By Nate Raymond
NEW YORK, Sept 29 (Reuters) – A U.S. judge on Tuesday dismissed claims against Saudi Arabia by families of victims of the Sept. 11, 2001, attacks, who accused the country of providing material support to al Qaeda.
U.S. District Judge George Daniels in Manhattan said Saudi Arabia had sovereign immunity from damage claims by families of the nearly 3,000 people killed in the attacks, and from insurers that covered losses suffered by building owners and businesses.
“The allegations in the complaint alone do not provide this court with a basis to assert jurisdiction over defendants,” Daniels wrote.
The victims had sought to supplement their case with new allegations to avoid that result, including based on testimony they secured from Zacarias Moussaoui, a former al Qaeda operative imprisoned for his role in the attacks.
Daniels said even if he allowed the plaintiffs to assert those new claims, doing so would be “futile, however, because the additional allegations do not strip defendants of sovereign immunity.”
Lawyers for the plaintiffs said they would appeal. Sean Carter, one the lawyers, said he believed the ruling was also the consequence of the U.S. government’s decision to keep classified evidence that could be favorable to their cause.
“Obviously, we respectfully disagree with Judge Daniels’ ruling,” he said
A lawyer for Saudi Arabia declined comment.
The ruling came just over 14 years after the Sept. 11, 2001, attacks, in which airliners hijacked by al Qaeda militants brought death and destruction upon the United States.
Most of the 19 attackers were Saudi nationals who hijacked planes and flew them into the World Trade Center in New York City, the Pentagon near Washington, D.C., and into a field in Pennsylvania after passengers revolted.
The case against Saudi Arabia has had a complicated history, with trial judges including Daniels twice before ruling that Saudi Arabia was entitled to immunity under the federal Foreign Sovereign Immunities Act.
But in 2013, the 2nd U.S. Circuit Court of Appeals in New York revived the lawsuit, in light of a 2011 decision that allowed similar claims to proceed against Afghanistan.
The case is In re Terrorist Attacks on September 11, 2001, U.S. District Court, Southern District of New York, No. 03-md-01570. (Reporting by Nate Raymond; Editing by Lisa Shumaker and Leslie Adler)
reuters.com