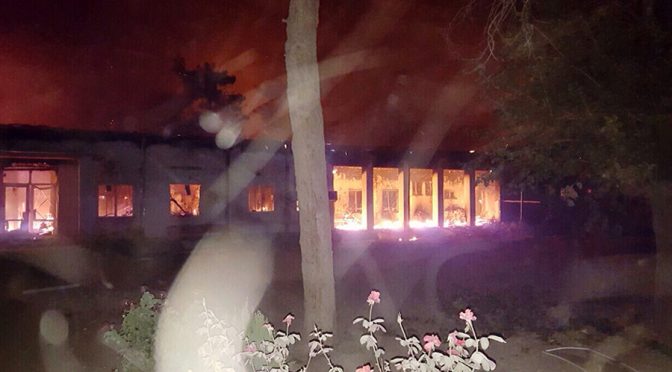 When Russia was about to bomb ISIS/L installations in Syria, Pentagon Chief Carter and Western media were quick in claiming the Russians were using “dumb bombs” for its “failure” to hit intended targets. Russian air sortie videos suggest otherwise.
While the Western media were making these grossly unfounded claims even before the Russian warplanes took off for the first time, Obama has taken more than a day to apologize for the US smart bombings in Kunduz Afghanistan, where hospital patients were burning in their beds as a result.

No, it wasn’t an accident, only an incident. The high precision air raid targeting the hospital lasted about half an hour.
Exceptionalists really find it hard to acknowledge their own faults but are too easy to find other people’s fault even when there’s none.
As to the cause of the bombing itself, we can speculate on the possible causes:

Add to that is the recent crash of C130 carrying 6 US military personnel and 5 military contractors in which the Taliban has laid claim, but how did they know the exact flight time and route, if not fed by someone from CIA and liaising with Taliban?
Were these military contractors knew a lot about some covert operations and must be eliminated, too?
The fate of Seal Team Six comes to mind.

The capacity of the CIA to create its own enemies so it could sustain the US military occupation in a target country  is already a known fact. Just like the ISIS terror group that wasn’t eliminated after 5,000+ US air sorties, the Talibans are still intact after 14 years of sustained, surgical, shock and awe bullshit.
That’s because they were not the ones being targeted, but the civilians and dispensable military assets.

Seeing their colleagues and patients die was a horrifying shock, according to survivors of the deadly air raid on a hospital in Afghanistan. The tragedy, medical staff said, simply cannot be dismissed as “collateral damage” from a botched airstrike.
Recalling the tense minutes of continuous airstrikes which hit the Medecins Sans Frontieres (MSF) hospital in Kunduz, NGO staff said that the destruction of the hospital is nothing short of a “grave violation of international humanitarian law.”
The aerial bombing raids took place between 2:08am and 3:15am local time and were carried out at approximately 15 minute intervals, with the main hospital building being “repeatedly hit very precisely” during each raid, MSF said. The tragedy happened despite the fact that MSF had provided the US-led command with the GPS coordinates of the hospital to make sure that the hospital would not be hit.

A survivor of the horrific bombardment, MSF nurse Lajos Zoltan Jecs, who had been inside the facility during the attack, described the airstrikes as “absolutely terrifying.”
“At first there was confusion and dust settling” he said, as cited by the MSF website. “As we were trying to work out what was happening, there was more bombing.”
“The bombs hit and then we heard the plane circle round,” recalled Heman Nagarathnam, MSF’s head of programs in northern Afghanistan. “There was a pause, and then more bombs hit. This happened again and again.”
Zoltan remembers seeing one of the emergency room nurses sustain massive trauma to his arm.
“He was covered in blood, with wounds all over his body. At that point my brain just couldn’t understand what was happening. For a second I was just stood still, shocked,” Zoltan said.
When the bombing stopped, some of the survivors left their shelters looking for those who could possibly have remained alive. Others, in a panic, tried to escape to safety, as the main hospital building was engulfed in flames.
“We tried to take a look into one of the burning buildings. I cannot describe what was inside. There are no words for how terrible it was,” Zoltan said.
“In the intensive care unit six patients were burning in their beds,” he added.

“Those people that could, had moved quickly to the building’s two bunkers to seek safety. But patients who were unable to escape burned to death as they lay in their beds,” Nagarathnam remembers.
One patient was left in the operating room on the table “dead, in the middle of the destruction,” the nurse recalled.
rt.com