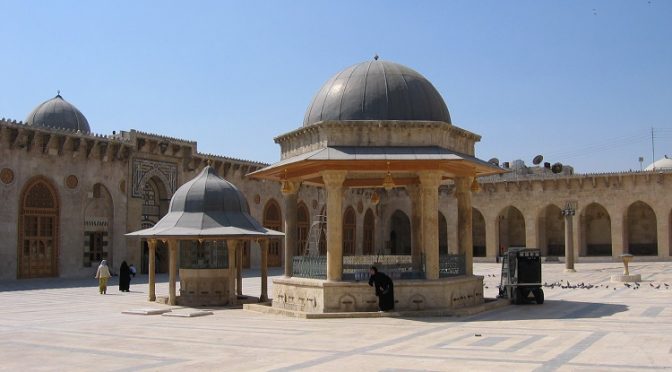 “Having realized the high efficiency of our reconnaissance assets in detecting masked equipment storage bases and the real threat of their destruction, terrorists are making efforts to move their weapons in residential areas.

Vehicles are usually deployed near mosques as the terrorists know that the Russian Air Force will never target them,” the Ministry of Defense commented on the issued video.

continue reading
We can also speculate that it was “war hero” Sen.  John McCain who instructed his “moderate rebel” friends to do so, being more knowledgeable about how dirty geopolitics work, i.e. knowing Putin won’t bomb Mosques [but build them inside Russia] to avoid antagonizing Muslims…
… unlike the US which just incinerated several patients inside a hospital in Kunduz.

McCain Claims to Be in Touch With Syrian Rebels

“I am personally in communication with them [the Syrian moderates], and they are being attacked,” McCain stated on Tuesday.

According to the Russian Defense Ministry, all the airstrikes against the Islamic State terrorist group were launched with advance air surveillance and careful verification of data provided by the Syrian military.
McCain asserted, however, that “the majority of the Russian attacks are against the Free Syrian Army, the moderates.”

Asked what sources he bases his conclusions on, McCain stated, “There is open source information, of course. It has been reported widely in every major newspaper in America.”

On September 30, Russia commenced precision airstrikes against Islamic State (ISIL) targets in Syria at the request from Syrian President Bashar Assad. Since then, Russia has targeted dozens of ISIL positions, including command centers, headquarters, multiple-launch rocket systems, T-55 tanks, and other military equipment.

Only hours after Russia started airstrikes against terrorist targets in Syria, US media reports began circulating accusations of Russia striking moderate Syrians trained under the 2014 US train and equip program and the earlier CIA program.

In 2014, Congress approved a $500 million program for the US military to train a force of 5,400 troops by the end of 2015 to fight the ISIL.
On September 16, US Central Command Commander, Gen. Lloyd Austin, stunned the Senate Armed Services Committee by admitting that out of the first group of trained fighters sent to Syria only four or five remained active.

McCain also claims that US-trained Syrian moderate rebels are losing confidence in their ability to fight as a result of a lack of US support.

“Their morale is at an all-time low because Americans trained them, equipped them, sent them into fight and then won’t protect them against being killed,” McCain said on Tuesday.

McCain was an early supporter of the CIA program to arm and train Syrian moderates to fight President Assad in the early stages of the Syrian civil war. The Senator famously posed for a picture with members of the US-backed Syrian opposition in 2013. Some news outlets later alleged the Syrians went on to join the Islamic State.

So effective are the Russian offensives that even Iraq is planning to request the same type of operations in the country. The Iraqis know how to slap Obama, too.

Published time: 7 Oct, 2015 10:08
Edited time: 7 Oct, 2015 10:19
Baghdad, Russia’s ally in its fight against ISIS, wants Russia to have a bigger role in the anti-terrorism campaign in Iraq itself and may soon officially request Russian airstrikes on its soil, the chairman of Iraq’s parliamentary defense committee said, Reuters reported.
Russia last week started carrying out airstrikes in Syria against the positions of Islamic State, a terrorist group originating in Iraq, which also grew a power base in neighboring Syria and launched a surprise offensive in Iraq, taking control of large parts of both countries.
Iraq is supporting the campaign by sharing intelligence with Russia through a communication center in Baghdad. Iran and Syria are also part of the center.
RT
And the Russians are unrelenting…