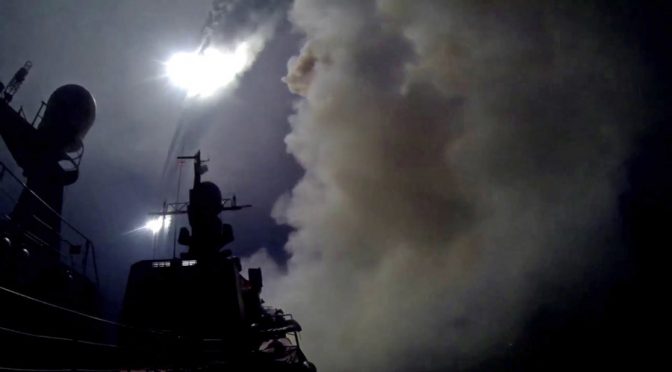 Our estimate was that it would take two weeks for Russia to disable the Islamic State. But we were wrong. Russia did it in a week!

“A precise hit on the terrorists’ fortifications led to the detonation of munitions and vehicles, causing a complete destruction of the stronghold,” he said.

A terrorist fuel depot near the town of Khan al-Assal was also razed to the ground.

Earlier, Konashenkov said that Russian warplanes hit 27 terrorist targets in the course of 22 sorties carried out in Syria overnight.

On September 30, Russia launched its Air Force anti-terror operation in Syria at the request of Assad’s government.” read more

Now, the Syrian Army is launching a grand scale ground offensive. against ISIS/L  This they do while borders in Iraq and Turkey are being sealed off with Russian Mi-35 combat helicopters, to the great consternation of the US chicken hawks.

Yesterday, Russia is calling a US bluff again by asking for US intel on ISIS positions if the latter really wants to eliminate ISIS. Up to this hour, the US refuses to provide one, prompting the Russians to ask who the US really are protecting.
As absurd as it may sound US mouthpieces even went to great lengths in claiming Russian cruise missiles were hitting Iranian civilian areas, under condition of anonymity of course.
The US  State Department, for its part, can’t confirm the allegation and won’t supply any evidence either to support the claims channeled through ISIS station Criminal News Network CNN.
Also, we have not received any confirmation of 147,000 Russian ground troops bound for Syria.
Now, more and more Iraqi officials are voicing their desire to acquire the same type of Russian military precision against ISIS in their home turf.

2 thoughts on “What US Failed To Do In 1 Year, Russia Did In A Week”