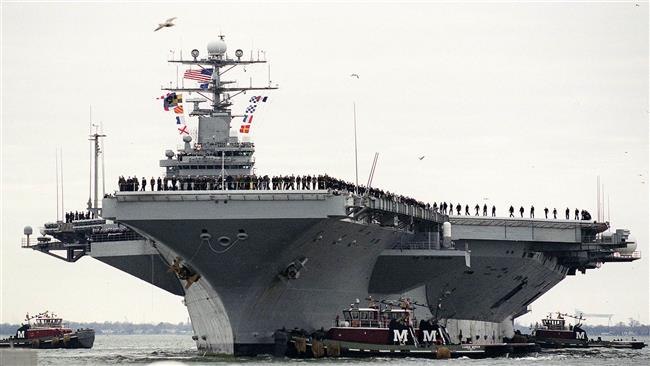 Back in July, the United States declared they are going to pull out the only aircraft carrier they have in the Persian Gulf.  After Russia fired several cruise missiles through Iran airspace and all hitting within 9 feet of its Syrian targets, the US is making good of its intention and is now pulling USS Theodore Roosevelt out of the area.

This pull out underscores further the White House’s decision of foregoing with its Assad must go geopolitical ambition.

The US Navy has announced that the USS Theodore Roosevelt would leave the Persian Gulf this fall and that would be the first time the Pentagon has no warships in the region since 2007.
Adm. John Richardson, who is President Barack Obama’s nominee to lead the Navy, said on Thursday that a two-month gap in presence of the aircraft carrier could make problems in the war against the ISIL terrorist group.
“Without that carrier, there will be a decrement in our capability there,” Richardson told the Senate Armed Services Committee.
The USS Theodore Roosevelt will not be in the Middle East for about two months.
The carrier has been launching strikes against ISIL targets in Iraq and Syria since last year.
Obama’s air campaign strategy to “degrade and ultimately destroy” the ISIL terrorists has been criticized by some American officials.
Critics insist on deploying combat troops on the ground in Iraq. They cite the group’s gains as the latest signs that Obama’s strategy to defeat the terror network is failing.
The ISIL terrorists, who were initially trained by the CIA in Jordan in 2012 to destabilize the Syrian government, are engaged in crimes against humanity in the areas under their control.
PressTV

2 thoughts on “US Pulls Aircraft Carrier Out of Persian Gulf”