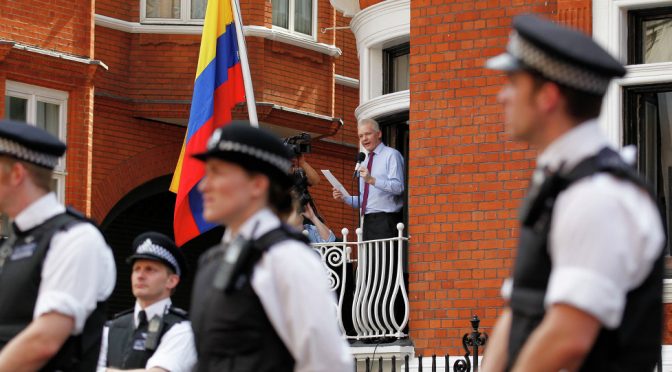 After spending over £12 million on this ridiculous attempt to arrest Julian Assange of Wikileaks, the stupid Cabalists in London called it quits.

Threats of assassination is of course a perpetual reality among whistleblowers.

16:22 12.10.2015(updated 17:22 12.10.2015)
According to the statement published on the Metropolitan police website, the UK police have maintained 24/7 presence outside the building since Assange entered it over three years ago.
“Whilst the MPS remains committed to executing the arrest warrant and presenting Julian Assange before the court, it is only right that the policing operation to achieve this is continually reviewed against the diplomatic and legal efforts to resolve the situation,” the statement said. “As a result of this continual review the MPS has today Monday, 12 October withdrawn the physical presence of officers from outside the Embassy.”

However, the Police Service has strenghtened covert plan at the embassy after guard removing.
Kristinn Hrafnsson, Official WikiLeaks representative, commenting on the issue told Sputnik:
“It’s a bit hard to read into it. Are they just replacing the visible presence with covert officers? The metropolitan police have spent over £12 million on this ridiculous siege for over three years now. So now they’re putting a covert team up against him. I wonder if that’s simply a change of tactics and the expenditure will simply go on. It’s very hard to read into exactly what this means. One can speculate that they are possibly trying to hide the cost by removing the visibility of the police officers who have been surrounding the embassy 24/7 since June 19, three years ago.”
“I don’t think I’d call anything a victory unless the siege was called off and Julian is allowed to enjoy the political asylum that he was granted fully in compliance with international law by the Ecuadorian government,” he added. “So this doesn’t make a huge difference in my mind, it’s obvious that the Metropolitan police is somewhat reacting to the outrage among the public for spending over £12 million on this ridiculous attempt to arrest him.”
British authorities have reportedly spent more than $25 million monitoring Assange in the time since he was first arrested in December 2010, according to a numeric counter on the govwaste.co.uk website.
According to activists, the money that the UK government could spent on guarding Julian Assange in London’s Ecuadorian embassy could have spent on 8 million meals for the needy, enough to get 50,000 children vaccinated and cash to pay for the school fees of 17,000 students.
Earlier the website govwaste.co.uk has put together what it claims to be the cost of employing police officers to guard the embassy in London, amid growing calls for something to be done to break the current stalemate.

Assange, who has been residing in the Ecuadorian embassy in London under asylum for over three years, has been wanted for questioning by the Swedish authorities since 2010 over accusations of unlawful sexual coercion and rape.
The activist denied the accusations, stating that Swedish extradition attempts are aimed at sending him to the United States, where he faces espionage charges for publishing thousands of leaked top-secret military documents and diplomatic cables online.
Three of the four allegations against Assange expired in August due to the Swedish statute of limitations for bringing charges. A rape charge remains in effect until 2020.
sputniknews.com

4 thoughts on “London Ends Stakeout vs. Assange at Ecuadorian Embassy”