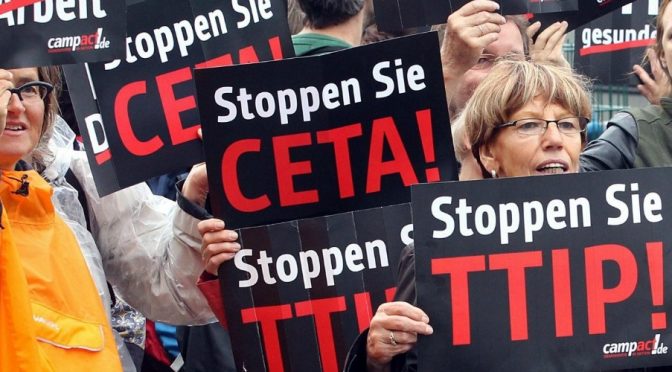 Governments are corporations, but too many are ignorant of this fact and they keep participating and electing leaders they hope are going to serve their interests. Sometimes, a good leader does emerge and when that happens, the Corporatocracy is threatened.

The Corporatists, however, they want a more predictable future.  They don’t want a freak of nature like Vladimir Putin to come to America.

“A leader of the caliber of Vladimir Putin is desperately needed in the United States, US political analyst Caleb Maupin underscores, drawing parallels between the Russian leader and American Presidents Abraham Lincoln and Franklin Delano Roosevelt.” read more

Therefore, they prefer that a rebel-proofed control mechanism be fully built into a corporate government. After they have established their monopolies, the Western Bankers are now aiming for the complete eradication of their biggest competition, i.e. sovereign governments, if they still exist.
The inclusion of an article giving any multinational company the option to sue the State renders any sovereignty moot and academic. So, while they may allow the illusory existence, or semblance of, a government, essentially it is rendered non-existent.

As EU and U.S. negotiators start the 11th round of TransAtlantic Trade and Investment Partnership (TTIP) talks in Miami on Monday, a European watchdog group is sounding the alarm over the negative impacts such “trade” deals could have on citizens’ rights to basic services like water, energy, education, and healthcare.
For the sake of corporate profits, both the TTIP and the Comprehensive Economic and Trade Agreement (CETA) between the EU and Canada “could lock … public services into a commercialization from which they will not recover—no matter how damaging to welfare the results may be,” the Brussels-based Corporate Europe Observatory (CEO) stated last week.
The group’s report, Public Services Under Attack (pdf), highlights “the secretive collusion between big business and trade negotiators in the making of the EU’s international trade deals.”
Specifically, it exposes “the aggressive agenda of services corporations with regards to TTIP and CETA, pushing for far-reaching market opening in areas such as health, cultural and postal services, and water, which would allow them to enter and dominate the markets.”
A report summary explains further:
Big business has successfully lobbied against the exemption of public services from CETA and TTIP as both agreements apply to virtually all services. A very limited general exemption only exists for services “supplied in the exercise of governmental authority”. But to qualify for this exemption, a service has to be carried out “neither on a commercial basis nor in competition with one or more economic operators”. Yet nowadays, in virtually all traditional public sectors, private companies exist alongside public suppliers – often resulting in fierce competition between the two. This effectively limits the governmental authority exemption to a few core sovereign functions such as law enforcement, the judiciary, or the services of a central bank.
So-called Investor-State Dispute Settlement (ISDS) provisions, meanwhile, which have been slammed as “a parallel legal system for corporations,” could make “regulations in sensitive public service sectors such as education, water, health, social welfare, and pensions prone to all kinds of investor attacks,” CEO cautions.
And “[g]iving in to corporate demands for unfettered access to government procurement could restrict governments’ ability to support local and not-for-profit providers and foster the outsourcing of public sector jobs to private firms, where staff are often forced to do the same work with worse pay and working conditions,” the group adds.
Opposition to the TTIP,  which would create a trade and investment zone encompassing 800 million people and nearly half of global economic output, is growing. A protest against the pact drew an estimated 250,000 demonstrators to Berlin earlier this month, while a recent poll indicated nearly half of Germans oppose the deal, compared to 25 percent against it last year. Due to the intense secrecy surrounding negotiations, WikiLeaks in August offered a €100,000 ($113,230 USD) reward for the full text.
A separate report released Sunday by the UK-based social justice organization Global Justice Now showed that the controversial pact is already pushing European governments to loosen key food safety standards.
CommonDreams
It’s obvious that even those who promote democracy, unregulated capitalism and monopolies don’t want a fair, level playing field.

Uber paid no corporation tax in 2014 by ‘exploiting loopholes’

Controversial US taxi firm Uber paid no corporation tax in the UK last year despite making £11 million (US$17 million) in revenue, accounts reveal.

The latest accounts for Uber show its UK arm made a total of £866,302 in profit in 2014 – £566,302 of which would be liable for tax at 21 percent.
It also deferred a payment of £22,134, which can be rolled over to next year.
However, the firm has not broken the law, as it is allowed to transfer profits to its Netherlands arm, where taxes are lower.
Critics are certain the firm has purposely exploited tax loopholes to avoid paying a single penny.

Commenting on these revelations, the Tax Justice Network said Uber “takes advantage” by shifting their profits around the world.
“When a multinational company takes advantage of a tax loophole by shifting their profits around the world via tax havens then that gives them an unfair advantage over companies entirely based in the UK,” Tax Justice Network researcher George Turner told RT.
“That is why taxi drivers in the UK are so angry at what is happening with Uber, they feel that they losing business because Uber abuses the tax system to gain an unfair advantage over them,” he added.

Licensed Private Hire Car Association chief Steve Wright told RT he is “in the midst of writing a formal complaint to the government and TfL [Transport for London].”
Uber has previously been criticized for not paying its fair share of tax.
Earlier this year an alliance of more than 20,000 taxi and minicab drivers called for the government to crack down on the app’s “unfair” tax practices.
Wright accused Uber of gaining an “uncompetitive advantage” by processing London bookings through its Dutch subsidiary so it pays a lower rate of VAT on the commission it takes from fares.
“Uber appears to have structured its [London] operation with the sole purpose of avoiding the application of VAT in the UK at the prevailing rate,” Wright said in a letter to HM Revenue & Customs in January.
“This is despite being a UK-registered company and a Licensed London Private Hire Operator, promoting its services in the UK and carrying out journeys in the UK for UK credit and debit cardholders,” he added.

‘Compliant with all tax laws’

The taxi firm still insists it is compliant with tax law.
continue reading
The original intention was to encourage everyone to join the reformist caravan but the spread of articles chronicling the existence a united effort to eliminate globalist tendencies has backfired, rendering the people even more passive, leading us to ask the question,
Do we really deserve the freedom we aspire?
If so, we need more than just organizing street protests.