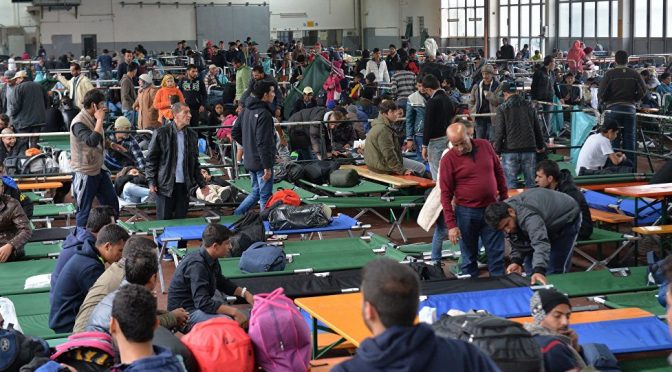 According to the Iranian FARS News Agency, Syrian refugees are now returning from Jordan and other places back into government recovered areas in Syria. The precision Russian airpower have decimated most of the critical Islamic State terror infrastructures, i.e. 1,104 ISIS targets as of last count.

This was made possible by the voluntary information fed by the civilians themselves about the specific targets that would later verified and subjected to surgical strike using Kh-29L high-precision air-to-surface missiles and KAB-500S guided bombs which are now being mass produced in three shifts a day .

TEHRAN (FNA)- Russia’s defense company Tactical Missiles Corporation started operating on a three-shift basis due to the growing demand for its products because of the Russian military operation in Syria.
Production has been ramped up since the start of the military campaign, the Russian weekly Kommersant-Vlast reported citing a military industrial source.
The airstrikes mostly involved Kh-29L high-precision air-to-surface missiles and KAB-500S guided bombs, both produced by Tactical Missile Corporation, Sputnik reported.
Additionally, the Russian Navy urgently purchased eight cargo vessels from Turkish ship operators. The vessels were registered as support ships with military status because regular Russian warships could not carry the load.
On September 30, Russia began precision airstrikes on ISIL terrorist group positions in Syria at the request of Damascus.
According to the Defense Ministry, from September 30 to October 22, Russian jets conducted 934 sorties from Hmeymim airbase and destroyed at least 819 ISIL targets.
english.farsnews.com

TEHRAN (FNA)- Russian bombers have destroyed 285 ISIL and Nusra Front targets over the past three days in Syria’s provinces of Hama, Idlib, Lattakia, Damascus, Aleppo, Deir Ezzur, the Russian Defense Ministry said Monday.
The Russian Air Force has conducted 164 sorties in Syria in three days, the Russian Defense Ministry’s spokesman added.
Russian Su-25 attack aircraft destroyed 3 ISIL strongholds in the Syrian province of Lattakia, Maj. Gen. Igor Konashenkov said.
Russian jets also destroyed a major Nusra Front ammunition depot in the Damascus province, he said.
Russian Su-34 aircraft hit and destroyed an ISIL base, equipped with anti-aircraft guns, mortars and large-caliber machine guns in the Aleppo province, Konashenkov said.
Also in Aleppo, Russian Su-34 bombers have destroyed an ISIL command center, which coordinated the jihadists’ combat operations against the Syrian Armed Forces near the Kuweires airbase.
“Su-34 bomber carried out a pinpoint strike near Zaytan in the Aleppo province on an ISIL terrorist group’s command center, which coordinated combat operations against the Syrian army in the area of the Kuweires airbase.”
In the Hama province, a terrorist plant, which installed machine guns on cars, was destroyed in a Russian airstrike.
“A plant, where terrorists installed heavy machine guns, mortars, Zu-23 anti-aircraft mounts on all-terrain vehicles, was destroyed in the Hama province. As a result of an airstrike plant floors used by militants to refit equipment completely burnt down.”
The Russian defense ministry’s spokesman dismissed media claims concerning alleged civilian deaths in Russian airstrikes in Syria. He added that US-based Syrian American Medical Society (SAMS) was the organization that had claimed about casualties among civilians.
“We will carefully monitor and analyze such media hoaxes. First of all, as for the Syrian American Medical Society, this organization registered in the US state of Illinois has something to do with medicine, as well as doctors, no more than ISIL is tied to the international scout movement.”
He added that Su-25 aircraft had destroyed 6 vehicles carrying artillery ammunition in the Idlib province. Moreover, Su-25 launched a strike on a convoy of jihadist fighters.
“As a result of a pinpoint strike three jeeps with heavy machine guns and two trucks used by terrorists to transport arms were destroyed.”
english.farsnews.com

Since the beginning of its operation in Syria on September 30, the Russian Aerospace Forces have carried out 934 sorties in Syria, destroying a total of 819 terrorist facilities, the Russian General Staff said Thursday.
Terrorists in Syria have lost offensive capabilities amid the Russian airstrikes and are deserting en masse to Turkey and Jordan, Andrey Kartapolov, head of the Russian General Staff Main Operations Directorate said.
The Syrian Army continues its offensive in the provices of Aleppo, Latakia, Idlib, Homs, and Damascus, Kartapolov said.
“Combat operations are being conducted around those locations where the Russian aviation is not used, while the Syrian Army uses its heavy artillery against concealed fire units,” he elaborated.
Russian forces have struck a bridge over the Euphrates river in Syria’s Deir ez-Zor province, cutting off supplies for Islamic State militants from Iraq, Kartapolov added.
“A key part of the supply chain is a bridge across the Euphrates river in the region of Deir ez-Zor. Today, Russian pilots carried out a surgical strike on this object, which resulted in the bridge becoming impossible to use for terrorists,” he told reporters.
According to Kartapolov, this supply route from Iraq was located by Russian drones.
“I wish to underline that the strike was carried out in an area, which, according to our American partners, is under the complete control of IS units,” he noted.
Some field commanders are reaching out to the Syrian Army, proposing local ceasefires and negotiations, Kartapolov added.
The leader of a militant gang in Syria’s Aleppo region sustained serious injuries in a battle with Syrian government forces, and his group has been defeated, the he went on to say.
The Islamic State has stopped the shelling of Damascus amid an offensive by Syrian government troops, the General Staff spokesman said.
“In spite of stubborn resistance by the militants, their encirclement continues to steadily shrink, block after block is freed. The most obvious result of this operation is the fact that, for the first time in quite a long time, the shelling of Syria’s capital has stopped,” he told reporters.
“During fighting in the southern suburbs of Aleppo, a leader of the al-Walid gang, so-called Sheikh Ahmad, was seriously wounded by Syrian government forces, and the gang was completely destroyed,” he said.
Russia started precision airstrikes against ISIL targets in Syria on September 30, following a request from Syria’s internationally recognized government. The Russian airstrikes hit targets that are chosen based on intelligence collected by Russia, Syria, Iraq and Iran.
sputniknews.com

TEHRAN (FNA)- Thousands of Syrian refugees left Jordan and returned home as the Syrian army, backed by Russian warplanes, continues to gain ground and advance against the Takfiri militants.
Some 17,000 people left Zaatari Refugee Camp in Jordan and returned back to Southern Syria, informed sources said Wednesday.
The Syrian army conducted mop-up operations against the foreign-backed Takfiri militants in Daraa city, inflicting heavy losses on them.
On Monday, the army destroyed terrorists’ positions in al-Menshia area in Daraa al-Balad neighborhood.
A large group of terrorists were killed and injured during the operations. Militants’ weapons and ammo were also destroyed.
Meanwhile, the Syrian troops killed and injured a number of terrorists during military operations against one of their positions near Attman town to the North of Daraa city.
http://english.farsnews.com/newstext.aspx?nn=13940729000487

TEHRAN (FNA)- Syrian refugees have welcomed Russian airstrikes, and some may even be returning from abroad as the Syrian army advances alongside the Russian air operation.
Syria’s Grand Mufti Ahmad Badreddin Hassoun said over 800,000 refugees have returned since Russian airstrikes against terrorist targets in Syria began on September 30.
The operation has also given refugees from the conflict hope that peace would return, according to interviews AP conducted around the Aleppo province, a hub for refugees leaving Syria.
“I hope that with Russian pilots’ help, our military will advance and defeat terrorists so that we could return to our homes,” one refugee told AP.
Hundreds of thousands of refugees have entered Europe in the past several months, many of them fleeing the Syrian conflict, particularly violence by the ISIL terrorist group.
Russian Aerospace Forces have carried out over 870 strikes, killing several hundred militants and destroying dozens of command centers and depots used by the terrorists.
http://english.farsnews.com/newstext.aspx?nn=13940802000381
With their supreme leader injured early on, most ISIL terrorists are now on the run in Turkey’s direction…

.2/ More Jihadi beards, shaved off in Reef #Aleppo, as they flee clean shaven 2 #Turkey, these Via @leithfadel pic.twitter.com/xOmMkhH8oY

As in any modern warfare, Russia is now engaging in psyops to divide and conquer the enemies of the Syrian government…

15:40 27.10.2015(updated 16:54 27.10.2015)
The information regarding the visit was confirmed by Russian Deputy Foreign Minister Mikhail Bogdanov on Monday. The next day, several senior members of rebel groups linked to the FSA claimed the visit did not take place.
“Nothing of this sort happened on our part as FSA. It is impossible for us to accept going to Moscow, and to have dialogue with it. We don’t want their help. … We contacted our friends in other areas and nobody went,” Abu Ghiath al-Shami, the spokesman for Alwiyat Seif al-Sham, told Reuters.
The same duality principle applies to accepting Russian help on the battlefield. On Saturday, Russian Foreign Minister Sergei Lavrov confirmed that Moscow was ready to cooperate with and provide aerial assistance to FSA-affiliated groups. Some senior members welcomed the move, others flatly refused.

Meanwhile, Russian Foreign Minister Sergei Lavrov broke the news that Russia finally managed to establish a preliminary contact with representatives of moderate opposition in Syria, adding that it was not an easy task.
“These efforts are ongoing. I hope that the contacts will produce results,” the diplomat noted.
This is a major feat indeed. For weeks, Moscow was asking anyone familiar with any group fighting under the FSA banner to share information on the exact location of the moderate opposition. Up until now, repeated attempts to talk to moderate rebels failed.
Whether they will be successful this time largely depends on the Free Syrian Army, which is a loosely-organized entity that lacks single leadership or real presence on the ground. Experts and officials both in Syria and beyond say that the FSA did exist some time ago but has been mostly absorbed by radical groups, including Islamic State and Jabhat al-Nusra.