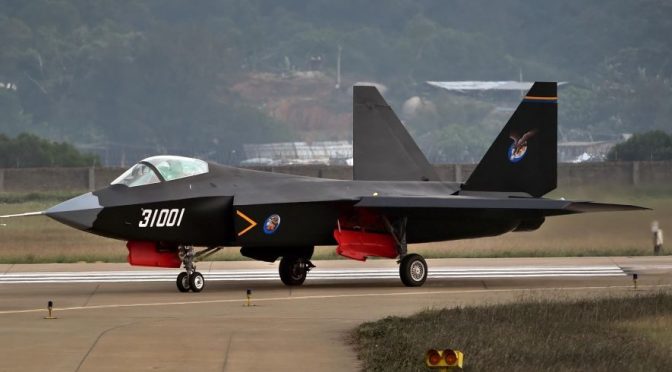 After Russia flaunted its military’s capability to render any given target unusable for decades after destruction, China released its method of creating very thin material that could deny radar signal from acquiring its location, i.e. stealth technology.

Stealth technology does the cloaking by absorbing most of the radar signal into its solid state structure instead of reflecting it back to the source as ordinary materials do.
This public disclosure now available at the Journal of Applied Physics website should deal a very strong blow to the hegemonic tendencies of the West, and should pave the way for more disclosures in the near future that could seal the fate of the warmongers around the world.

Said disclosure was picked up by Popular Mechanics and DefenseOne websites…

November 11, 2015 By Patrick Tucker
A group of scientists from China may have created a stealth material that could make future fighter jets very difficult to detect by some of today’s most cutting-edge anti-stealth radar.
The researchers developed a new material they say can defeat microwave radar at ultrahigh frequencies, or UHF.  Such material is usually too thick to be applied to aircraft like fighter jets, but this new material is thin enough for military aircraft, ships, and other equipment.
Today’s synthetic aperture radar use arrays of antennas directing microwave energy to essentially see through clouds and fog and provide an approximate sense of the object’s size, the so-called radar cross section. With radar absorbent material not all of the signal bounces back to the receiver. A plane can look like a bird.
“Our proposed absorber is almost ten times thinner than conventional ones,” said Wenhua Xu, one of the team members from China’s Huazhong University of Science and Technology, in a statement.
In their paper, published today in the Journal of Applied Physics, the team describes a material composed of semi-conducting diodes (varactors) and capacitors that have been soldered onto a printed circuit board. That layer is sitting under a layer of copper resistors and capacitors just .04 mm thick, which they called an “active frequency selective surface material” or AFSS. The AFSS layer can effectively be stretched to provide a lot of absorption but is thin enough to go onto an aircraft. The next layer is a thin metal honeycomb and final is a metal slab.
The good news: the material isn’t locked away in a lab but published openly, so it’s not going to surprise anyone.
Stealth is considered by many to be one of the key technologies that enabled U.S. military dominance throughout the last century, effectively neutralizing, or offsetting, technological gains made by rival nations and the Soviet empire.
“In the 1970s, Secretary of Defense Harold Brown, working closely with Undersecretary – and future Defense Secretary – Bill Perry, shepherded their own offset strategy, establishing the Long-Range Research and Development Planning Program that helped develop and field revolutionary new systems, such as extended-range precision-guided munitions, stealth aircraft, and new intelligence, surveillance, and reconnaissance platforms,” former Defense Secretary Chuck Hagel said at a November 2014 event outlining the Pentagon’s newest technological push.
The F-35’s stealth capabilities are often touted as the jet’s most valuable feature. But in 2009, China was reportedly able to steal design and electronics data related to the program. China’s J-31 fighter resembles the F-35 to an uncanny degree, leaving many to wonder if the electronics on the inside are a match as well.
The publication today won’t answer that question but does speak to a growing Chinese capability in stealth technology, an area where the United States once had clear dominance.
http://www.defenseone.com/technology/2015/11/chinese-scientists-unveil-new-stealth-material-breakthrough/123622/?oref=site-defenseone-flyin-sailthru
Now, any country can implement its own stealth warfare programs and defy established military installations.