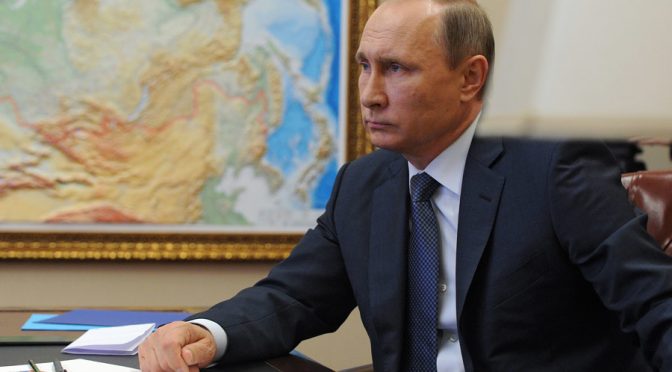 This is the harshest statement from Vladimir Putin so far. Surely, Turkey is also expecting this and probably is Erdogan’s way of rallying the Turkish population into his fold to ensure his own political future.

NATO and Western intelligence agencies are also counting on picking a fight with Russia with their endless military exercises right at Russia’s doorstep.
Said plane was 4 kilometers away from Turkish border when shot down. Both pilots ejected but only one survived from the volley of fire from IS militants below.
This one will test Grandmaster Putin’s resolve to neutralize Islamic State and its covert patrons. The Turkish Stream is now history for sure.
Remember, Putin just attended the G20 meeting in Turkey and for the latter to do this just days later is beyond all established international norms. But who can expect the Khazarian puppet to observe such formalities?
Even by simple definition, this is an act of war by Turkey against Russia.  Erdogan just committed a harakiri with this one. This is Covert WW3 slipping though, sad to say.

Turkey backstabbed Russia by downing the Russian warplane and acted as accomplices of the terrorists, Russian President Vladimir Putin said.

“This incident stands out against the usual fight against terrorism. Our troops are fighting heroically against terrorists, risking their lives. But the loss we suffered today came from a stab in the back delivered by accomplices of the terrorists,” Putin said.
Follow LIVE UPDATES on Russian warplane shot down at Syria-Turkey border
Putin said the plane was hit by a Turkish warplane as it was traveling at an altitude of 6000 meters about a kilometer from the Turkish border. It was hit by an air-to-air missile launched by a Turkish F-16 jet. The crash site is four kilometers from the border. The plane posed no threat to Turkish national security, he stressed.
Putin said the plane was targeting terrorist targets in the Latakia province of Syria, many of whom came from Russia.
Russia has for a long time been aware of oil going from Syria under the control of terrorists to Turkey, Putin said. The money finances terrorist groups.
“IS has big money, hundreds of millions or even billions of dollars, from selling oil. In addition they are protected by the military of an entire nation. One can understand why they are acting so boldly and blatantly. Why they kill people in such atrocious ways. Why they commit terrorist acts across the world, including in the heart of Europe,” the Russian leader said.
The downing of the Russian warplane happened despite Russia signing an agreement with the US to prevent such incidents in Syria, Putin stressed. Turkey claims to be part of the US-led coalition fighting against IS in Syria, he added.
The incident will have grave consequences for Russia’s relations with Turkey, Putin warned.
“We have always treated Turkey as not only a close neighbor, but also as a friendly nation,” he said. “I don’t know who has an interest in what happened today, but we certainly don’t.”
The fact that Turkey did not try to contact Russia in the wake of the incident and rushed to call a NATO meeting instead is worrisome, Putin said. It appears that Turkey want NATO to serve the interests of IS, he added.
Putin said Russia respects the regional interests of other nations, but warned the atrocity committed by Turkey would not go without an answer.
Putin was speaking at a meeting with King of Jordan Abdullah II in Sochi, who expressed his condolences to the Russian leader over the loss of a Russian pilot in Tuesday’s incident, as well as the deaths of Russians in the Islamic State bombing of a passenger plane in Egypt.
The two leaders discussed the anti-terrorist effort in Syria and Iraq and the diplomatic effort to find a political solution to the Syrian conflict.
Earlier a Russian Su-24 bomber was shot down by Turkish fighter jets near the Turkish-Syrian border. Turkey claimed that the plane violated Turkish airspace and did not respond to warnings. Ankara said it was rightfully acting to defend its sovereignty.
Russia insists that the plane stayed in the Syrian airspace.
One of the two pilots of the downed Russian warplane was reported killed by a rebel group as he was parachuting down on the ground after ejecting from the plane. The fate of the second pilot remains unknown.
https://www.rt.com/news/323262-putin-downing-plane-syria/