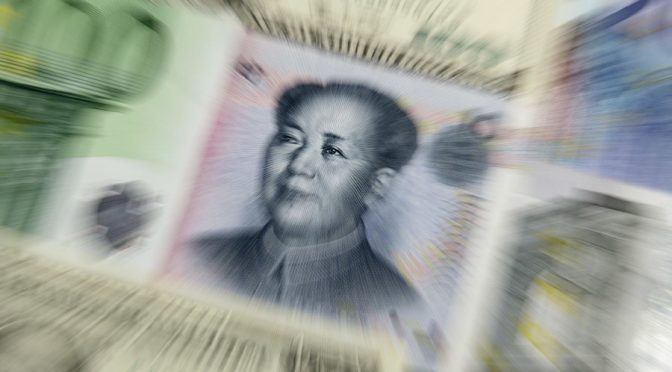 The International Monetary Fund has just included the Chinese Yuan in its SDR basket of currencies paving the way for it to become a currency of choice starting October 2016. This Yuan SDR inclusion will further shutdown the dominance of the dollar as the preferred currency for global exchange.

Western media dismissed this development as a non-event, of course, even if the IMF has given the currency more weight over that of the yen and pound, i.e. 10.92% weight, and even though major BRICS countries are already trading their products and services through bilateral currency swap arrangements.
Russia is not waiting for 2016 to stock up on Yuan. Here’s why…

The International Monetary Fund (IMF) is expected to give the yuan a vote of confidence on Monday and include the Chinese currency in its Special Drawing Rights (SDR) that unites the US dollar, euro, British pound and the Japanese yen.
Adding the yuan as a reserve currency will allow central banks to buy more of the Chinese currency, and boost investment in the Chinese stock market. According to Standard Chartered bank, within five years market players will invest at least $1 trillion in Chinese assets.
The historic decision will come after years of negotiations between Beijing and the IMF. The main obstacle was China’s monetary policy of keeping the yuan artificially low to boost domestic exports.
The list of currencies in the basket hasn’t been updated by the IMF since 2000, when the euro superseded the franc and deutschmark.
The main opponents of including the yuan as reserve currency have been Japan and the US. According to Eswar Prasad, a professor at Cornell University and former head of the IMF’s China Division, the two countries are unlikely to thwart the deal this time. “I think it will be very difficult for the IMF, especially given all that China has done this year, to deny China the prize it really wants,” he told Reuters in October.
Beijing devalued the yuan in August in a shock move to respond to slowing growth. That decision was praised by IMF Chief Christine Lagarde, who said the Chinese currency became more market-oriented. However, the yuan is still tightly controlled by the People’s Bank of China, the country’s central bank.
Although the decision is expected on Monday, the yuan will not officially become a reserve currency until September 2016.
https://www.rt.com/business/323935-china-yuan-imf-busket/

The Central Bank of Russia has included the Chinese yuan in its reserve currency basket, TASS reports. The move is expected to boost the yuan’s presence in the Russian financial market.
As of December 31, 2014, the latest data available, the US dollar was still dominating Russia’s forex basket at 44 percent. The second most-used foreign currency was the euro with 42 percent. The British pound made up 9.5 percent.
According to Vesti.Finance, the Central Bank made the decision in November, but hasn’t bought the yuan yet.
The Chinese currency started trading on the Moscow Exchange in 2010. Since then, the volume of trades has grown significantly. This August Russian traders bought a record 18 billion yuan (about $2.8 billion), which is four times more than in August 2014.
Russian investors began looking east, after the US-led group of Western counties imposed sanctions against Russia over Ukraine. Sanctions have deprived Russia access to Western capital markets. In particular, they affected state-owned banks like Sberbank, VTB, Vnesheconombank, Gazprombank and Rosselkhozbank (Russian Agriculture Bank).The lenders were cut off from long-term (over 30 days) international financing.
This news comes before the International Monetary Fund’s announcement on Monday whether to include the yuan in its Special Drawing Rights (SDR). The US and Japan, who have been the main obstacle to the yuan being included in the reserve currencies basket, are unlikely to thwart the deal, Eswar Prasad, a professor at Cornell University and former head of the IMF’s China Division told Reuters in October.
https://www.rt.com/business/323639-russia-adds-yuan-reserve-currency/