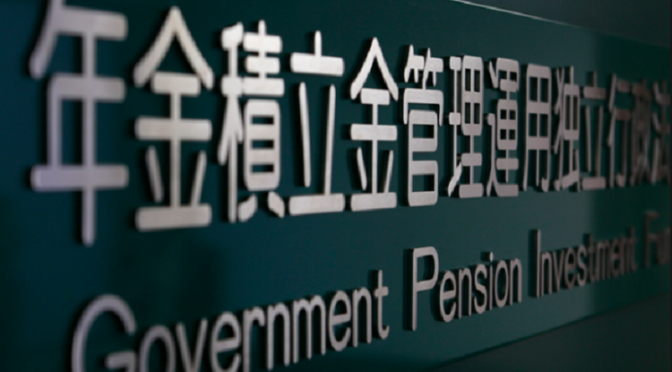 The world’s biggest pension fund posted its worst quarterly loss since at least 2008 after a global stock rout in August and September wiped $64 billion off the Japanese asset manager’s investments.

The 135.1 trillion yen ($1.1 trillion) Government Pension Investment Fund lost 5.6 percent last quarter as the value of its holdings declined by 7.9 trillion yen, according to documents released Monday in Tokyo. That’s the biggest percentage drop in comparable data starting from April 2008. The fund lost 8 trillion yen on its domestic and foreign equities and 241 billion yen on overseas debt, while Japanese bonds handed GPIF a 302 billion yen gain.
The loss was GPIF’s first since doubling its allocation to stocks and reducing debt last October, and highlights the risk of sharp short-term losses that come with the fund’s more aggressive investment style. Fund executives have argued that holding more shares and foreign assets is a better approach as Prime Minister Shinzo Abe seeks to spur inflation that would erode the purchasing power of bonds. 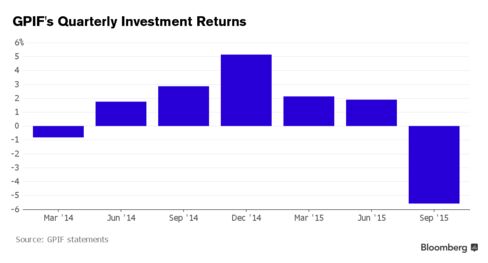 “Short term market moves lead to gains and losses, but over the 14 years since we started investing, the overall trend is upwards,” Hiroyuki Mitsuishi, a councilor at GPIF, said at a press conference in Tokyo. “Don’t evaluate the results over the short term, as looking over the long term is important.”

GPIF had 39 percent of its assets in Japanese debt at Sept. 30, and 21 percent in the nation’s equities, according to the statement. That compares with 38 percent and 23 percent three months earlier, respectively. The fund had 22 percent of its investments in foreign stocks at the end of September, and 14 percent in overseas bonds.
The retirement fund’s stock investments are largely passive, meaning returns typically track benchmark gauges. GPIF’s Japan equities slid 13 percent, the same decline posted by the Topix index, as China’s yuan devaluation and concern about the potential impact if the Federal Reserve raises interest rates roiled global markets. The fund lost 11 percent on its foreign equity holdings. Shares have rebounded since Sept. 30, with the Topix climbing 12 percent.
The fund can hedge its foreign-exchange risk if needed, Mitsuishi said, while declining to comment on whether GPIF had, or plans to start doing so.
continue reading
Japan’s pension fund is one of Cabal’s piggybank.