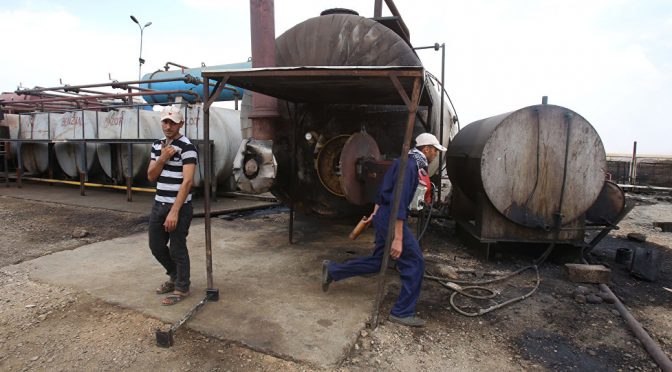 Breaking: Russia has officially identified 3 routes of Illegal ISIS Oil to Erdogan’s Government
After Vladimir Putin accused Erdogan’s government of backstabbing and one of 40 ISIS financiers, it demanded more evidence aside from those that have been already blown to smithereens by Russian warplanes.
Erdogan offered to resign if such evidence directly linking him to ISIS oil smuggling exists.


Strangely, no less than the Free Syrian Army will provide such paper-based evidence of the actual purchase of oil from ISIS controlled oilfields in Syria and Iraq. These oil and cash or arms swaps made the Islamic State the richest terror group today.
The same financial windfall has also befallen the Erdogan household, so much so that it is willing to plunge the Turkish population to a disastrous Russian economic sanction just to preserve it.
The ISIS oil bonanza is now ending with unrelenting Russian strikes and the implementation of its no-fly zone across Syria.
The Turkish population will have a chance of seeing the Erdogan family in court if they have the will to impeach and prosecute the ISIS enabler.

FSA Says Has Proof of ISIL’s Oil Deal with Turkey

TEHRAN (FNA)- The Free Syrian Army (FSA) announced that it has corroborative evidence to prove Turkish crude purchase from ISIL based on contracts.
A senior FSA member responsible for information affairs told the Russian media that the group has received images of the contracts signed by Turkey to purchase Iraq and Syria’s oil resources from the ISIL.
German media had reported earlier this month that Russian airstrikes on the ISIL’s oil infrastructure caused natural dissatisfaction of Turkey that appears to be the main consumer of ISIL’s oil.
In the wake of the downing of the Russian Su-24 bomber jet by Turkish air force, President Vladimir Putin said that Ankara appears to be an accomplice of terrorists, as it is purchasing oil in regions of Syria captured by extremists, and he is on solid ground in saying so, the German newspaper Bild reported.
Turkey has turned into a major consumer of oil from the ISIL, the author of the article continued. Turkish businessmen sign deals on oil purchases with the ISIL, allowing them to get revenues of $10 million weekly.
The Kremlin long time ago obtained information that oil from ISIL-seized territories in Syria is being transferred to Turkey. And the fact that Russian Aerospace Forces started to conduct more attacks against ISIL infrastructure couldn’t be overlooked by Ankara, Sputnik said.
According to Bild, Turkish policies regarding the ISIL are not quite transparent: although Ankara provided Americans with opportunities to use the country’s airbase for launching attacks against ISIL positions, Erdogan allows terrorists sneaking into Syria to go through Turkey without hindrance.
At the same time, Bild noted, Turkey is not the only state that is making dirty oil deals with the ISIL militants for its own profit. Smugglers supply Jordan and Kurdistan, in which black market trade is flourishing, with ISIL oil, Eckart Woertz, the senior analyst for Barcelona Centre for International Affairs, said.
Putin, after a press-conference with the French President François Hollande, said that significant amounts of oil from ISIL-controlled areas in Syria is being transported to Turkey:
“We are speaking about industrial-scale supplies of oil from Syrian territories seized by terrorists — from these exact areas and not from any others. And we can observe from the air where those cars are heading to,” the president announced. “They are moving to Turkey day and night.”
http://en.farsnews.com/newstext.aspx?nn=13940910001083
If Erdogan has nothing to hide, why did he order the arrest of the officers who intercepted the weapons delivery into the Islamic State?
Normally, these officers should have been rewarded for performing their duty with fervor.

Three Turkish officers, involved in the inspection of an intelligence agency’s weapons-filled trucks, allegedly destined for Syrian terror groups, have been arrested on treason and espionage charges. Meanwhile journalists who broke the news face similar charges.
On Saturday, police detained Ankara Gendarmerie Regional Commander Major General Ibrahim Aydin, former Adana Gendarmerie Regional Commander Brigadier General Hamza Celepoglu and former Gendarmerie Criminal Laboratory Head Colonel Burhanettin Cihangiroglu. An Istanbul court ruled in favor of their arrest shortly after midnight, in the early hours of Monday morning, according to local media.
READ MORE: ‘Oxygen for jihadists’: ISIS-smuggled oil flows through Turkey to intl markets – Iraqi MP
Security officials are facing “spying” charges over an incident in January 2014, when Gendarmerie intercepted trucks belonging to Turkey’s National Intelligence Organization (MIT).
An inspection of the trucks exposed large quantities of munitions being transported to Syria. After opening a metal container bearing a ‘FRAGILE’ mark, the inspectors found munitions hidden in crates under boxes of medicine.
The information caught public attention in May 2015, when the website of the Cumhuriyet media outlet posted footage of MIT trucks being inspected by security officers. The paper reported that altogether, in that particular run, MIT trucks had been carrying over 80,000 rounds of ammunition of different calibers, some 1,000 mortar shells and hundreds of munitions for grenade launchers.
The arrests of Gendarmerie officers comes shortly after a court in Istanbul demanded the arrest of two Cumhuriyet journalists for exposing contacts between Turkish intelligence and Syrian terror groups.
https://www.rt.com/news/323899-turkey-officers-treason-arrests/

Syrian and Iraqi Oil are being smuggled through Ceyhan Port, Turkey

Over the last two weeks, Russia has been destroying the “living pipeline” that has allowed Turkey to steal tens of millions of barrels of Syrian crude oil, much of it at peak market prices, while only paying their ISIS allies a pittance.

This process isn’t new.  Turkey did this all during the Bush era, having cut a deal with US “manager” Paul Bremmer, a deal VT insiders helped manage for Bremmer and that I was witness to personally.

The game involved playing Baghdad against Erbil and bleeding off oil revenues from the Kirkuk Oil Fields, largest oil reserves in the world, as they moved by pipeline through Kurdistan and into Turkey.  There they were offloaded onto American tankers in the Mediterranean where these huge ships, largest in the world, were filled with oil but it was never recorded and the oil never paid for.

During the Bush era “War on Terror,” up to 40% of Iraqi crude oil, up to half of what was sent through Turkey on the Baku-Ceyhan pipeline was stolen.  Our investigations between 2005-7 which included meetings between Gordon Duff and Iraqi and Kurdish leaders in both Erbil and Tikrit covered this issue.

VT sources within the Turkish Navy at Ceyhan, Turkey,  reported Exxon tankers loading up to 2 million barrels of Kirkuk light sweet crude oil at a time did so “off the record.”

Russian reconnaissance footage have shown oil is being smuggled through ISIS-held areas in Syria into Turkey day and night. There are vehicles carrying oil, lined up in a chain going beyond the horizon.

Vladimir Putin accused Turkey of allowing ISIS Terrorists to run a “living oil pipe” across its border as he upped the ante in the row over the downing of a Russian jet.

The Russian President said that reconnaissance footage, shared with world leaders at the G20 summit earlier this month, showed that oil was being smuggled through terrorist-held areas in Syria into Turkey “day and night”. There were “vehicles, carrying oil, lined up in a chain going beyond the horizon”, he claimed.

Speaking after talks at the Kremlin with the French President Francois Hollande, Putin accused Ankara of false naivety over ISIS’s huge oil operation. “Let’s assume that Turkey’s political leadership knows nothing about it – it’s theoretically possible, albeit hard to believe,” he said. “There may be elements of corruption and insider deals. They should deal with it.”

Putin has gone for the jugular after the Turkish military shot down the Russian SU-24 jet after accusing it of violating its airspace during an operation in northern Syria. The incident is thought to be the first time in 50 years that a NATO member has downed a Russian plane.

Turkey is acutely sensitive to claims that it is turning a blind eye to ISIS, a view held not only by Russia but also by Western states who believe that Turkey has not done enough to prevent terrorists from slipping across its 500-mile border with Syria; timesofindia.indiatimes.com reported.

– See more at: http://en.alalam.ir/news/1764291#sthash.rRsaqb4X.dpuf
http://www.veteranstoday.com/2015/11/28/erodgan-owes-syria-100bn-for-stolen-oil-iraq-owed-1-5tn/
“He [Erdogan] has been supporting ISIS since I was over there several years ago. I’ve met some of the black-marketeers along the Syrian border there in [Turkish] Hatay province, and so they’re alive and well. But Erdogan is a problem, he really is, and if I was ambassador Churkin, not only would I propose something in the Security Council for cutting off the finances, but also doing some kind of action against Erdogan. He is a very, very negative force in that area.”