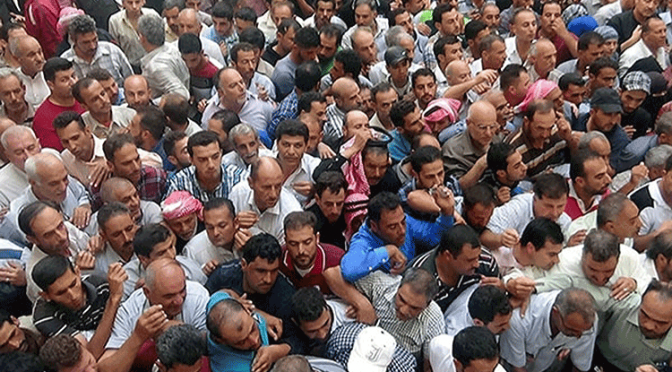 For the last 24 hours alone over 180 wanted militants turned themselves in to the Syrian authorities in Dara’a.
The Syrian government has implemented an armistice program to lure the rebels and Takfiri terrorists back into civilian lives, as military efforts alone cannot guarantee the end of terrorism everywhere.

“In total, including Homs and its western suburb, we are talking about 10,000 people who have laid down arms over the past two years,” said Haidar, Syrian Minister of State for National Reconciliation Affairs.
Accepting rebels back into any society does require psychological reorientation and livelihood programs to make it more effective which the reconciliation and armistice programs are addressing.
These former rebels are now seeing the full picture of what the CIA ISIS rebellion is really all about, and may have come to the final conclusion that “dictator Assad” is the lesser evil.

The lure of illegal oil money from the other side served as the prime motivation for these rebels to join ISIS and, as all of us know already, that has also been taken care of by the Russians since September 30th which is now decapitating financially the ISIS leaderships including Erdogan’s oil smuggling enterprise.
Putin just recently sent a 60-strong Marines Team into Hom’s province to “advise” Syrian army’s 67th Brigade of the 18th Tank Division and the National Defense Forces (NDF). If all goes well with the Russian-led coalition, Islamic State would be totally eradicated from Syria by the first quarter of next year. 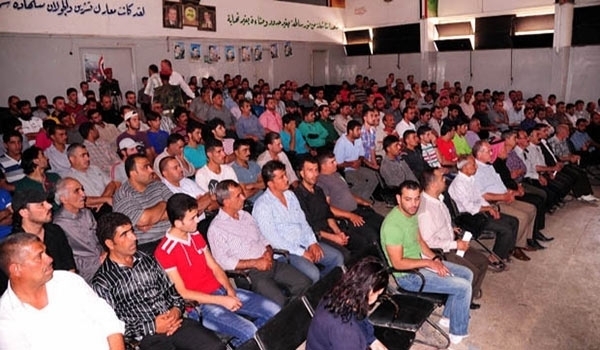 Units of the army and armed forces on Saturday continued to launch wide-scale military operations against dens and positions of the Takfiri terrorist organizations across the country, killing scores of them and destroying their arms and ammunition, state-run SANA news agency reported.
In Daraa, units of the army and armed forces  destroyed the supply routes and dens of al-Nusra Front terrorist organization and of the so-called “Jaish al-Yarmouk” in the southern Daraa province.
A military source told SANA that units of the army carried out operations against terrorists’ dens on the southwestern outskirts of Daraa City, killing a large number of terrorists from al-Nusra Front and other Takfiri organizations, adding that among the terrorists killed was Hasan Mansour al-Saleh who is the leader of the so-called “Horan Martyrs Brigade”
In Daraa al-Balad neighborhood, an army unit carried out special operations morning against hotbeds and dens of the Takfiri terrorists in the surroundings of Zenobia School and the building of the Doctors Syndicate, and in the neighborhoods of al-Nazihin, al-Sibieh, and al-Hammadin.
Two armored vehicles were destroyed in the operations and a number of terrorists were killed including terrorist Mifleh al-Kinani who is the leader of one of the Takfiri organizations in the area.
An army unit also destroyed a den of the Takfiri organizations to the east of al-Sikak buildings in Ataman town, killing a number of their members and destroying a machinegun and an amount of varied arms.
Heavy losses were also inflicted upon the Takfiri terrorist organizations in the personnel and the ammunition in operations carried out by units of the army against their dens in Tal al-Harra, Enkhil, Jasem and Kafr Shams.
Meanwhile, the terrorist organizations admitted on their pages on the social networking websites that tens of their members were killed including terrorist Hasan Mansour al-Saleh who is the leader of the so-called “Horan Martyrs Brigade” and Mohammad Nidal al-Shummari who is the leader of the so-called “Jaish al-Yarmouk.”
In Homs, the army air force destroyed vehicles and positions of terrorists of the so-called ‘Islamic State of Iraq and the Levant’ (ISIL) takfiri group in the surroundings of al-Maqale’a in Palmyra Countryside.
In Lattakia, a unit of the army and the armed forces kills scores of terrorists, one of them of Saudi nationality in al-Hilweh town in the northern countryside of the coastal Lattakia province.
In the Southwestern province of Quneitra, military sources said that militants have retreated from several battlefields following the Syrian Army’s offensives in various parts of the province on Friday.
The sources said that the army troops’ operations in al-Tuloul al-Homr, Trinjeh and Abo Shabta have resulted in the killing and wounding of several insurgents.
Earlier this month, the Syrian government forces targeted Takfiri militants’ hideouts and assembly points in al- Hamehiyeh and al-Samadaniyeh al-Gharbiyeh villages in the countryside of Quneitra, and killed a large group of terrorists, and destroyed all their weapons and ammunition.
Earlier on Thursday, over 1,200 terrorists laid down arms and surrendered to the Syrian authorities, the Syrian local sources also confirmed.
The militants also turned over their cache of ammos to the authorities, both sources added.
The development came after President Bashar al-Assad in a televised address in July pardoned all soldiers who have fled the army, saying that his words served as a general decree to relevant officials.
Hundreds of gunmen have been laying down their weapons and turning themselves in to authorities in areas across the country.
http://www.almanar.com.lb/english/wapadetails.php?eid=226257 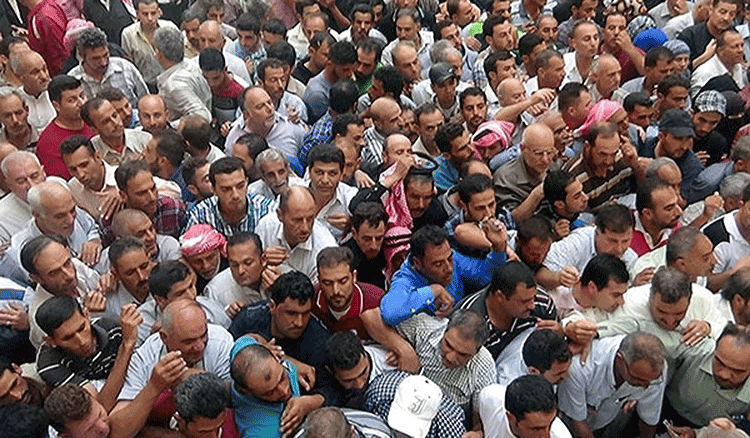 TEHRAN (FNA)- Over 10,000 Syrian people have given up their weapons over a two-year period as part of the government’s armistice program, the Syrian minister of reconciliation said on Tuesday.
“In total, including Homs and its Western suburb, we are talking about 10,000 people who have laid down arms over the past two years,” Ali Haidar said, RIA Novosti reported.
Up to 6,000 former fighters have returned to civilian life in the Damascus suburb in the past six months, according to Haidar.
He named Homs, the third-largest city in Syria, as the most striking example of a successful local ceasefire, where 1,500 former militants gave up their weapons in 2013. Two weeks ago, 700 militants were said to have laid down their arms in the village of Daraa in Southwest Syria.
The government offers Syrian citizens to lay down arms and go through a rehabilitation process to return to normal life as part of the national reconciliation program.
http://en.farsnews.com/newstext.aspx?nn=13940728001080

A Syrian government program for armistice has proven to be successful as thousands of people have reportedly given up their weapons over a two-year period, officials say.
Syrian Minister of State for National Reconciliation Affairs Ali Haidar said on Tuesday that over 10,000 people, including many former militants in the third-largest city of Homs, have laid down their arms in response to a government plea for giving up hostilities and returning to a civilian life.
“In total, including Homs and its western suburb, we are talking about 10,000 people who have laid down arms over the past two years,” said Haidar, adding that the number continues to rise citing reports suggesting that hundreds in a village in southwest Syria have also accepted to put down their weapons.
In the process devised by the Syrian government, citizens that have been involved in the four-and-a-half year militancy in the Arab country could become part of a rehabilitation program by laying down their arms so that the government guarantees them a return to normal life.
Haidar said Homs in western Syria has been the most striking example of a successful local ceasefire, where 1,500 former militants gave up their weapons in 2013.
Syrian forces have made significant gains against the Takfiri terrorists across the country in recent weeks. Airstrikes by the Russian military have also contributed to the achievements by the Syrian army. Militants across Syria have been forced to either retreat from their positions or give up fighting against the government forces.
http://www.presstv.com/Detail/2015/10/20/434229/Syria-armistice-weapons-Homs-Ali-Haidar

TEHRAN (FNA)- A unit of more than 60 Russian Marines arrived in the Homs province’s Eastern part in order to advise and overlook the Syrian Army’s counter-offensive against the ISIL terrorists in Western side of the ancient city of Palmyra (Tadmur).
Prior to the arrival of the Russian Marines in Eastern Homs, the ISIL was on the offensive at the strategic villages of Al-Bayarat and Al-Dawa; however, the situation changed after the terrorist group failed to bypass the Syrian army’s defense lines, an army source said.
After the arrival of the Russian military advisors, the Syrian army’s 67th Brigade of the 18th Tank Division and the National Defense Forces (NDF) of Homs city, under the command of the Russian Marine advisors, launched a counter-offensive at al-Bayarat, seizing the lost territory from the ISIL terrorists in the village’s Eastern part.
The pro-government forces, including the army, the NDF, the Lebanese Hezbollah and the Syrian and Russian Air Forces, have been coordinating in recent weeks for a large-scale operation to end the ISIL control over Palmyra.
On Saturday, fierce fighting resumed between the Syrian army troops and ISIL terrorists West of Palmyra.
The Syrian troops engaged in heavy clashes with ISIL terrorists in al-Bayarat region West of Palmyra, inflicting heavy losses on them.
The news also said that the Syrian warplanes intensified their airstrikes on ISIL strongholds in several regions across the province of Homs on Saturday.
The Syrian air raids hit ISIL positions in the high-profile Quaryatayn city and al-Shindakhiyeh al-Janoubiyeh village in Homs province.
http://en.farsnews.com/newstext.aspx?nn=13940915000410