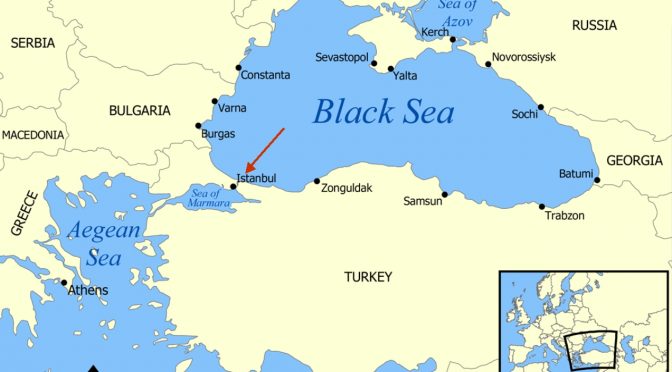 For the last few days a growing tension is occurring along the natural strait known as the Bosporus Channel when a Russian cargo ship was confronted by a Turkish submarine.
The channel is the shortest route for Russian ships to enter Syria.

There were also exchanges of coast guard bureaucratic red tapes from both countries holding up their commercial ships for days when sanctions were raised against Turkey.
That tension has gone higher today when a Russian soldier was seen holding a rocket launcher when a Russian warship navigated through the Turkish channel.
In addition to that, at least 50 Russian warships are being prepared for possible escalation of war with Turkey.
This is another proof that Russia is not taking any chances after its Su-24 was shot down without provocation and after the confrontation with a submarine along the channel.

Turkish social media have been circulating images claiming to show a Russian serviceman on a naval vessel passing by Istanbul holding what appears to be a rocket launcher. Ankara has slammed the reported incident as a “provocation”.
It is claimed to have taken place in the Bosporus with photos beginning to emerge online last Friday. They purportedly show a large Russian landing ship – the Caesar Kunikov – sailing by the Turkish city en route from the Black Sea to the Sea of Marmara.
Turkey’s Foreign Ministry has summoned the Russian ambassador over the reported incident, a Turkish official told Reuters.
“For a Russian soldier to display a rocket launcher or something similar while passing on a Russian warship is a provocation,” Turkish Foreign Minister Mevlut Cavusoglu told reporters Sunday.
“If we perceive a threatening situation, we will give the necessary response,” he added, according to Hurriyet.
The Turkish foreign ministry has also warned the Russian ambassador against any repeat of the incident, Reuters reports citing sources.

Russian soldier standing atop Kunikov today with a manpad on his sholder while crossing the bosphorus. Why? Anyone? pic.twitter.com/U16LDY0cZm

While the Russian military has not commented on the incident, the ship in the pictures does, indeed, look like the Caesar Kunikov. The authenticity of the snaps purporting to show a Russian serviceman with a manpad cannot be independently verified at the moment.

It seems this Ropucha's air defense guy carried that thing all along the bosphorus pass. Around 40mins. Poor guy. pic.twitter.com/OXqxXJbVnm

It is also unclear whether the ship really did cross the Bosporus in recent days, as the Bosphorus Naval News reported it had passed by Istanbul “on her way to Syria” in late October. In late November it was captured by a Reuters photographer on its way back to the Black Sea.

Russian-Turkish relations have deteriorated since a Russian pilot was killed when a Turkish F-16 fighter shot down his Su-24 bomber near the Turkish-Syrian border on November 24. Moscow took a number of measures against Turkey following the incident, including imposing an embargo on some foods, suspending the visa-free travel regime between the two countries, and freezing the Turkish Stream gas pipeline project.
Russia has the right to use the Bosporus Strait, as well as the Dardanelles, according to the Montreux Convention of 1936 that grants such rights to all Black Sea powers.
https://www.rt.com/news/324956-russia-turkey-relations-manpad/

The Russian ship, which was passing from the Aegean Sea into the Sea of Marmara, is believed to have been on its way to the Black Sea. The video accompanying the news report was reportedly filmed in the city of Canakkale, on the southern coast of the Dardanelles, at their narrowest point.
The Turkish sub is said to have been accompanying a Turkish coast guard vessel.

The Turkish daily emphasized that this was a particularly tense moment, given the situation surrounding the Su-24 bomber shot down by the Turkish Air Force over Syria last week, which resulted in the deaths of two Russian servicemen, and a rapid cooling in relations between Ankara and Moscow.
The Dardanelles. The video showing the tense moment between the Yauza and the Turkish sub was shot from the Turkish city of Canakkale.


Moscow has demanded an apology for what it considers an act of aggression on Turkey’s part. Ankara, meanwhile, has refused, Prime Minister Ahmet Davutoglu stating at a press conference with NATO Secretary General Jens Stoltenberg on Monday that “no country should ask us to apologize…We apologize for committing mistakes, not for doing our duty.”
The video also comes on the heels of reports that two Turkish Navy subs are following the Russian missile cruiser Moskva, off coast of Syria. The Moskva is charged with protecting the Russian air base at Hmeymim in the Syrian province of Latakia.
The Yauza, a 14,400 ton, 133 meter transport vessel, formerly a polar logistic ship, was obtained by the Russian Navy earlier this year, received following an overhaul and deep modernization in May. The ship, built in the 1970s, is equipped with new diesel generators, new crane equipment, and new security, communications and navigation systems.
On Tuesday, a military diplomatic source told Russia’s RIA Novosti that Russian Navy ships are not experiencing any problems passing through the Bosporus and the Dardanelles at the moment, adding that the Yauza’s meeting with the Turkish sub was not out of the ordinary, given the heavy traffic in the transit zone.
http://sputniknews.com/asia/20151201/1031037798/turkish-sub-russian-ship.html

Crew members of the Russian Caspian Flotilla have commenced combat readiness exercises involving over 50 warships, the Southern Military District (SMD) said Monday.
MOSCOW (Sputnik) — Two of the Caspian Flotilla’s active Gepard-class frigates and six Buyan-class corvettes were listed as taking part in the training.
“Crew members of over 50 ships and supply vessels began working out the first elements of the course tasks,” the SMD said.
The crew of the vessels taking part in the drills are carrying out exercises to prepare the ships for battle, as well as conducting damage control and air defense maneuvers.
Last week, the Caspian Flotilla’s marine battalion held counter-terrorist drills involving 200 service personnel and 20 units of military equipment.
http://sputniknews.com/military/20151207/1031351564/russia-caspian-drills.html