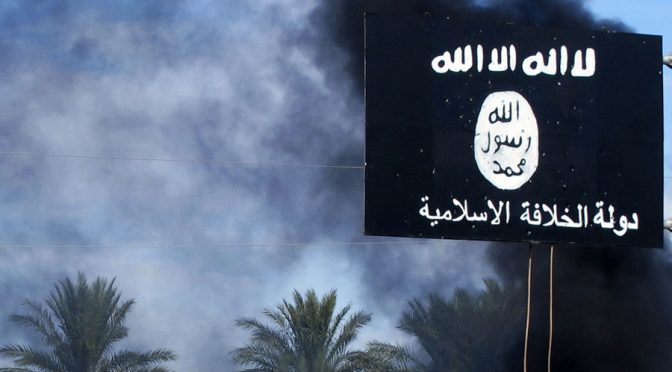 The United States is leading a 65-nation coalition against the Islamic State [ISIS/ISIL] and for more than a year it can only claim one good hit, i.e. ISIS finance officer, Abu Saleh, of all terrorists.

Is the United States cleaning up its track already as to NATO’s involvement with financing and arming through “stolen oil for weapons” swaps with the richest terror enterprise on Earth, now that the Russians, Iranians and Hezbollah are ruining their cozy relationship with the latter?
We ask this very important question because none of the independent news network in the Middle East are carrying this story and we suspect that the finance officer could still be alive but is only put out of circulation while the cover-up to ISIS financial activities is being started. Or, he could be silenced for good as claimed to serve the same purpose.
Either way, the Turkish incursion into Iraq is now providing the necessary diversion.

The US has confirmed the Islamic State ‘finance chief’ Abu Saleh has been killed in an airstrike by the US-led coalition.

Brett McGurk, Special Presidential Envoy for the Global Coalition to Counter ISIL, stated that Abu Saleh was killed along with two associates “as part of [a] coalition campaign to destroy ISIL’s financial infrastructure.”
Along with Saleh, coalition airstrikes also killed Aby Maryam, the “ISIL enforcer and senior leader of their extortion network,” and Abu Rahman al-Tunisi, who was coordinating transfer of information, people and weapons, Warren said.
All three were killed in late November in the vicinity of Tal Afar, Iraq without the opportunity to capture them, Warren added.
In mid-November, the US began targeting at least 116 trucks used by IS to smuggle crude oil in Syria as part of a campaign to disrupt the ability of the jihadist group to generate revenue to supports its operation. The terrorist organization is reported to take in as much as $40 million a month by producing and exporting oil.
READ MORE: Sifting for facts: 6 things we learned from Secretary Carter’s Senate testimony
Since then, more than 40 percent of the revenue IS receives from oil has been affected by the US-led strikes, General Joe Dunford, chair of the Joint Chiefs of Staff, told the House Armed Services Committee at the beginning of December.

The United States had previously refrained from striking the fleet of trucks, believed to number over 1,000, out of concern over civilian casualties. To prevent that, F-15 jets dropped leaflets prior to the attack, warning drivers to abandon their vehicles. The leaflets were followed by strafing runs an hour prior to the strikes to emphasize the message. After the strikes, US officials said that there were no immediate reports of civilian casualties.
https://www.rt.com/news/325522-isis-finance-chief-killed/

Oil Smuggling and Syria: Is NATO No Better Than Turkey?

Washington is still banging its war drums over the Daesh threat, despite not having raised a finger to counter the infamous terror group, Czech-based freelance journalist and analyst Martin Berger underscores.
The true goal of this propaganda campaign is to excuse Washington’s over-the top military spending, which only benefits American arms manufacturers.
“The White House is using terrorist attacks around the globe that were supposedly carried out by Islamist groups to carry on its own wars in the Middle East, subjecting the countries it doesn’t like to bombings and devastation,” Berger writes in his article for New Eastern Outlook.
The facts on the ground show clearly that US generals have not even begun fighting Daesh, he stresses, adding that the US military’s only contribution to the situation was “arms supplies to Islamists.”
“Of course they didn’t do this on purpose; they just can’t seem to properly drop crates anymore, missing time and time again… After all, back in May, US Senator John McCain openly admitted that three out of four bombers involved in the operation in Syria return to their bases without ever dropping a single ordnance,” the journalist remarked with a hint of sarcasm.
The media has also depicted Turkey as a knight without fear or blame, which is fighting against Daesh.
“But finally, these masks have come off,” Berger notes.
It is no secret that Turkey is involved in an illicit oil trade with Daesh and selling stolen Syrian and Iraqi oil. The Russian Ministry of Defense has demonstrated satellite and drone images of hundreds and hundreds of oil trucks moving from Daesh-held territory to Turkey to reach their destination at Turkish refineries and ports controlled by Recep Erdogan’s family.
“This information is confirmed by a study by two professors of the University of Greenwich, George Kiourktsoglou and Alec Coutroubis, titled ‘ISIS Gateway To Global Crude Oil Markets’. Those two gentlemen established the route of stolen oil across Turkey to foreign markets. There’s not a glimpse of a chance that the ruling elites of Great Britain, Turkey, the United States and other NATO countries were not informed about such facts,” Berger stresses.
The journalist calls attention to the fact that the Turkish port of Ceyhan, where the trucks with stolen oil arrive, is located an hour’s drive from the US military base at Incirlik.
It looks like Turkey’s major NATO allies are pretty aware of what is going on, the journalist remarks. One can’t exclude the possibility that the oil stolen by Daesh has been supplied to numerous NATO members, he adds.
Now Turkey and its NATO compatriots are beefing up their military presence along Daesh supply routes. Does it mean they want to protect the radical Islamists from new air strikes? Or, Berger asks, are they once again unable to find the Daesh forces directly in their midst?
http://sputniknews.com/politics/20151210/1031535597/oil-smuggling-syria-iraq-nato-no-better-than-turkey.html

One thought on “Pentagon Claims ISIS Finance Officer Dead, Was He Silenced on Purpose?”