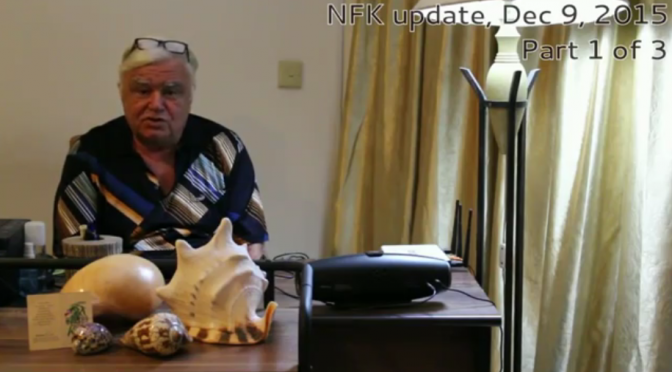 Neil is a stone’s throw away from control of the Accounts and the subsequent issuing of assets to 132+ Nations with the assistance of the Elders and Neil’s right arm, the Spiritual Advisor known as “the Prince.”

From the very beginning Neil Keenan realized that he was in it for the long haul, but at the time, not even he knew what an arduous task he was taking on.
It officially started with his unprecedented lawsuit which was made famous in David Wilcock’s article “Financial Tyranny.”  The lawsuit is in the process of being re-filed in spite of many a roadblock.
So much “clutter” and subterfuge has had to be cleared before moving ahead.  Cabal representatives tried to settle the lawsuit with Neil to make him go away but he could not be bought off.
Group after group have made the scene with sensational false claims to the Global Accounts, and rightfully each one has dissolved into nothing.  And then there are those who still speak out of both sides of their mouth but have not a thing to show for it.
Now the course ahead is clear, no more blocks in the road.
Neil notes:  “The funny thing is people forget that those shills, cons, etc. were always in the way seeing that it’s their job to protect the accounts for the Cabal, whereas the Keenan Group’s job was to protect the Family’s assets.
The actual re-filing of the lawsuit is relatively easy after finding the truth about what has happened to us for approximately 300 years.  The games, the fraud, the deceit, the murders, have all been exposed to the people on this planet again and again until it’s finally sinking in that it’s real.
Think about what we have been through and the mind control they have had over us for so long!  Yes, our mothers, fathers and others have all gone through this but we are now at a very special time called the Awakening.
We are the special ones, the chosen ones.  We have taken it to the very end and right now we have a brand new beginning.”
Presently Neil is waiting to receive three “letters” which will involve instituting desperately-needed changes on our planet.  Once he signs them, he will be in control of the Global Accounts.   According to Neil, he will then be able to take care of the matters detailed in the original Bretton Woods Agreement:
“If you understand this, then you realize a major theft took place not just after the first but also after the second Bretton Woods Agreement.   To top it all off, this theft took place even before the ink had dried on the agreement.
The Western Financial System was set up based upon such thefts, and as we all know they used Eastern assets from the Global Accounts to achieve all of their goals.”
So this is where we are today – Neil is a stone’s throw away from control of the Accounts and the subsequent issuing of assets to 132+ Nations with the assistance of the Elders and Neil’s right arm, the Spiritual Advisor known as “the Prince.”
Neil:  “We are close.  So close we can almost taste it!  It is called the End Game.  This is what we feel — the salvation of mankind and the earth itself.  This is not ‘meet the new boss, same as the old boss.’   Yes, we have more roads ahead of us, but the road is straight now and we will never fall off it again.”
On a side note, some of the Cabal tactics that Neil has contended with have also included attacks that could be termed esoteric in nature.
These escalated incidents have remained unmentioned here, but Neil has a strong comment on this interference:  “Among a lot of things I have access to, I have access to the book of ‘Black Magic.’  We know what we’re fighting.  We can fight this battle however they wish.  But you see the results of their rituals – you see it lasts for only so long.
Otherwise right now there’d be only a few of us left standing.  What we’re doing – it’s here to stay.  Maybe it’s OUR witching hour for the Khazars, Nazis, Zionists.”
And this may be nothing for them to laugh about.
Neil put forth a most commendable effort in bringing you this video message even though he has been working more than just overtime.  With the benefit of some holiday time, you can bet that he is building up his second wind to take this to the next level.
Because that’s exactly where we’re standing – at the next level.
We join Neil in expressing our thanks and gratitude to all who believe in a world of peace and harmony.  “The true spirit of Christmas lies in the heart.”
THE KEENAN TEAM
Video Part One

A song from Sophie Le Berre to you all relating to what is happening in this Mad Mad World …
Copyright © 2015, GROUP K, Ltd.

9 thoughts on “The Accounts Are Beckoning, Clear Sailing Ahead | Keenan”