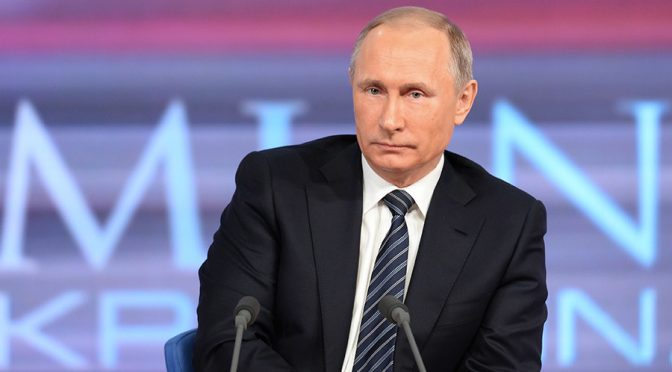 For the first time in our recent history, somebody is standing up against the exceptionalist norms and, unlike JFK, is getting away with it.
Russian President Vladimir Putin is truly making his country proud and as expected the nationalist fervor enabled the country to survive all economic and geopolitical sanctions unleashed upon by its enemies, which ironically Putin endearingly calls their “partners”.

Always cool in the midst of the undiplomatic and unprofessional vitriol from both Western media and politicians, and unpredictable in his countermoves across the grand geopolitical chessboard, Putin is commanding global respect not only from his peers but also from amongst intellectuals and highly awaked spectrum of our society.
His firm resolve of correcting other countries’ mistakes without making too much of a big fuss about them by letting the actions do the talking is what makes the whole idea of Putin absolutely exceptional, it’s no wonder some of them are starting to immortalize the man.

Is Putin Immortal? The Internet Loses Its Mind Over the Question 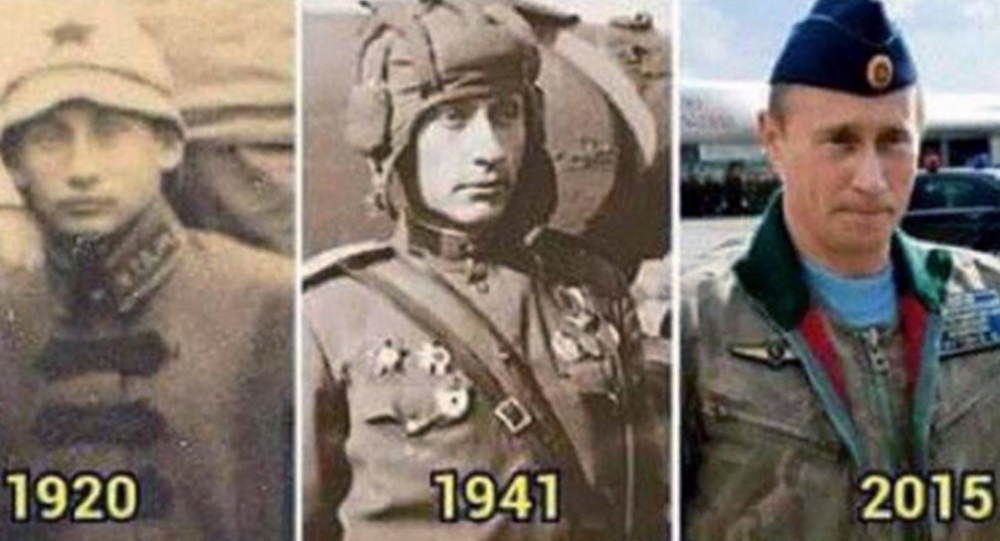 In March 2015, Western media was transfixed with an international mystery: Where, oh where, had Vladimir Putin gone? Based on nothing more than that the world leader had not been seen in public for nine days, Western pundits speculated on a wide range of explanations. Some assumed the president had fallen ill, while others predicted his death.
Now the conspiracies have swung to the other extreme. Alive and kicking, Putin’s energetic nature has spawned theories that he may be immortal.

The Russian President #Putin has lived since the beginning of time. PROOF: pic.twitter.com/MgGoqLyy9f

Evidence presented by the fabulists is based on two photographs, one taken in 1920, and the other in 1941. They both feature a young Russian soldier who bears a striking resemblance to President Putin. This could easily be explained as a mere coincidence…or, it could mean (wait for it…) Putin is a vampire.
“In fact, supporters of the thesis that Putin is almighty and immortal have launched a story that their president is a mythical creature that resides on our planet for hundreds, if not thousands of years,” Disclose.tv has declared.
Digging deeper, we find even earlier evidence of the president’s immortality. According to the theorists he may have played a role in the Greek War of Independence in 1821.

Am I the only one to think this General Valtinos (19th century Greek) looks like #Putin? pic.twitter.com/a2MtVkbJPt

And he may have played a significant role in the global art scene.

Of course, one of the greatest ironies of being immortal is being forced to watch others die around you. Luckily for Putin, he may not have suffered his fate alone.

Just in case u haven't seen it, #NicolasCage is a #Vampire. #lol #freaky Vampires are #undead, therefore #immortal. pic.twitter.com/UW1gJLs3k8

http://sputniknews.com/russia/20151217/1031870020/immortal-putin.html
Superimposing David Wilcock’s work about multiple reincarnations [including his own Cayce reincarnate claim], and other notable cyclical events spanning thousands of years including that of Hitler, into the above mythical assertion should create an aura of validity.
But we choose to see Putin as a man who is truly prepared for the task he was given, having the right values formation at an earlier age which he benefited from his studies in Oriental culture and tradition coupled into the patriotic Russian culture.

“They [Turkish authorities] thought that we would turn tail and run! No, Russia is not that country! We have increased our presence in Syria, have increased the number of combat aircraft deployed there. There was no Russian air defense system there – now there is S-400. If, before, Turkey had constantly violated Syrian airspace, let them try now.” – Putin

He is said to have studied Judo martial arts which, like other defensive arts, utilizes the offensive force against itself. This is the basis of the methods being used by Vladimir Putin against its enemies. The most visible use of such technique is Russia Today or RT, which is now in every “free speech loving” nations on the planet, e.g. America, UK, etc.

Through RT, Western propaganda has been effectively attenuated and for the first time, the alternative media is further empowered by a global broadcast medium. No longer have the monopoly of the conversation, the Khazarian Enterprise is now attempting to put everyone on the edge by advertising their massive surveillance apparatus.

Edward Snowden, however, commented that with too much collected data, the ability of the State to analyze intelligently is further overwhelmed to the point of it becoming virtually useless. The State, in return, responded that they can do a JADE HELM to automate and “master the human domain” through the use of multiple quantum supercomputers.

The whole surveillance mindset is the modern day version of the all-seeing eye within the concept of god and hell.

Through the Russians’ decisive actions in Syria which exposes the true picture of the Islamic State and its financiers, the White House has no other  choice but to abandon the “Assad must go” rhetoric and is abiding with the Russian stance of letting the Syrian people decide their own fate through a fair and clean election.

“John Kerry softened America’s demand yesterday that Syria’s dictator must step down, declaring that the timing of Bashar al-Assad’s departure was open to negotiation.

The US secretary of state retreated from the earlier US position that Assad’s removal must be the first step towards resolving Syria’s civil war. “- Telegraph

As each day passes, the real image of terror around the world is slowly being unmasked and it’s only a matter of time when the mainstream perception will change and begin to accept those conspiracy theories as matters of fact.
Up until this time, we haven’t seen any reason to doubt the Putin’s intentions and Russian actions outside of their own territory. The planned purchase of highly advanced Russian logistics and weaponry by China, India and Iran should tip the balance of military power in favor of the Eurasian continent preventing the unilateral imposition of endless wars everywhere.
Russia’s recovery to become a major military power once again in such a short time stems from the fact that its own military industrial complex is more patriotic than its counterparts in the West. The failures of so many Western military programs exposed its weakest point, i.e. the motivation to make huge profits first more than anything else.
The restoration of the formidable Russian military might and its domestic economy are the results of a leadership that truly inspires people to move beyond their selfish interests. This is what makes a nation.
Because of his rarity, the non-Russian can only honor the man with myths.