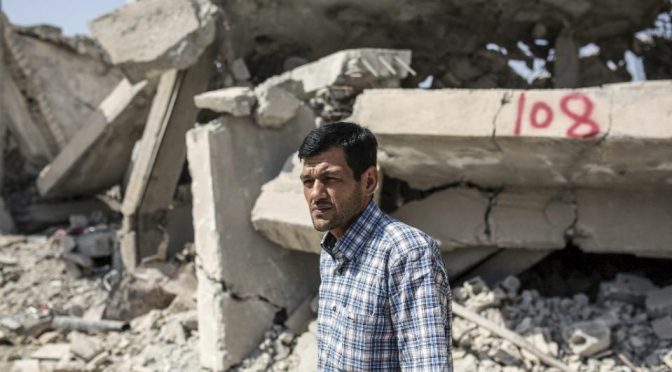 The mainstream world woke up to the Syrian Crisis only when millions of refugees came knocking down their borders, highlighted by a picture of a boy, one of many, who drowned that day in September.

“For weeks we have ignored the plight of the refugees from the Middle East thinking that the highly civilized European Community would responsibly shoulder the brunt of the human catastrophe of their own making. But high society has a way of turning a blind eye until all TV cameras are pointed at them.”

The battle against terror is not over yet, especially when the other half of the world are still in denial yet of the true identity of the personalities involved.
The terrible choice of crossing the high seas in dilapidated seacrafts for the people in the region of conflict won’t end unless the root cause of terror is eliminated.

Until the rest are fully awakened, there will be more fathers who will lose his children in a conflict he doesn’t completely understand.
The father, Abdullah Kurdi, is asking everyone to have some compassion for the refugees fleeing from terror.

London (AFP) – The father of toddler Aylan Kurdi, whose lifeless body on a Turkish beach became a symbol of the refugee crisis, has made a Christmas appeal to the world to open its doors to Syrians fleeing conflict.
The message, to be broadcast by Britain’s Channel 4 on Christmas Day, comes after the UN refugee agency said that more than one million migrants and refugees reached Europe this year.
They included over 970,000 who made the dangerous journey across the Mediterranean.
Three-year-old Aylan died in September after his family, sheltering in Turkey from the war in Syria, decided to make a desperate bid to reach Greece in a flimsy inflatable boat.
Shocking images of the toddler washed up and face down on the shore helped spur European nations to seek an effective response to the growing migrant crisis.
“My message is I’d like the whole world to open its doors to Syrians. If a person shuts a door in someone’s face, this is very difficult,” Abdullah Kurdi says in the video message.
“When a door is opened they no longer feel humiliated,” he adds, according to a transcript released by Channel 4.
Aylan’s mother Rihana and brother Ghaleb, 4, died in the same accident and were buried in the Syrian town of Kobane in September, days after the tragedy.
Abdullah Kurdi had been trying to escape along with his family and up to three other Syrians from the flashpoint town, which was last year the site of a months-long battle between Kurdish militias and jihadists.
“At this time of year I would like to ask you all to think about the pain of fathers, mothers and children who are seeking peace and security,” says Kurdi who now lives in Erbil in Iraq.
“We ask just for a little bit of sympathy from you.”
The UNHCR said that of the million who reached Europe in 2015, about half were Syrians fleeing the country’s brutal civil war.
“The number of people displaced by war and conflict is the highest seen in Western and Central Europe since the 1990s,” it said, referring to conflicts in the former Yugoslavia.
In a sign that the crisis shows no sign of abating, at least 10 migrants including five children died Wednesday when their boat sank near the Greek Aegean island of Farmakonissi, the national ANA news agency said.
Another 13 people were rescued and two more are feared missing, the agency said.
And on Tuesday, the Italian coastguard said that nearly 800 people had been pulled to safety in the Mediterranean as they attempted the crossing, and one body recovered.
Greece was by far the leading landing spot for migrants to Europe this year, with 821,008 arrivals including 816,752 by sea, the International Organization for Migration said this week.
A total of 3,692 migrants died or disappeared crossing the Mediterranean this year, it added.
EU leaders have set an end-of-June deadline to agree on a new border and coastguard force to slow the influx of migrants across the 28-nation bloc’s porous external frontier.
They have also called for the rapid delivery of a promised 3.0 billion euros ($3.25 billion) in aid for refugees in Turkey in return for its help in stemming the flow.
Life is a struggle for most Syrians in Turkey, who live mostly off odd jobs that are often insufficient to feed and house a family.
Following a slew of emergency summits this year, EU leaders have acknowledged they were too slow to carry out a joint strategy to tackle Europe’s worst refugee crisis since World War II.
http://news.yahoo.com/father-drowned-syrian-toddler-asks-world-open-doors-022952772.html
The land of immigrants are also having a hard time confronting its own dilemma…

WASHINGTON, Dec 23 (Reuters) – The U.S. Department of Homeland Security has begun preparing for a series of raids that would target for deportation hundreds of families who have flocked to the United States since the start of last year, The Washington Post reported on Wednesday.
Citing people familiar with the operation, the Post said the nationwide campaign to deport the illegal immigrants by U.S. Immigration and Customs Enforcement could start as soon as early January.
It would be the first large-scale effort to deport families who have fled violence in Central America, the newspaper said.
http://www.huffingtonpost.com/entry/immigration-raids-deportation_567b5705e4b0b958f6594240
What causes mass migration from Central America?
This holiday season we ask that the world get rid of its apathy, and take on the task of removing the root causes of planet’s ills.