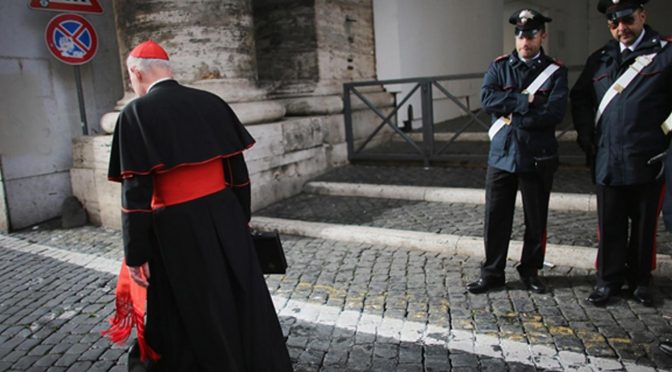 Would you believe that anybody could just use a Vatican car for smuggling drugs? Would you believe that an organization that exist for thousands of years is not wise enough to mitigate a situation wherein their logistical resources could be used for nefarious objectives, hence, implement a very tight security measures all the time?

What the Vatican is known for instead is its propensity to hide heinous crimes and criminals in their entire history.
From the Nazi invasion of the United States through the Vatican Ratlines, to the suppression of witnesses of pedophilia cases through a directive issued by the resigned Pope Benedict XVI, to the massive mafia money laundering, the Vatican had shown its skills in executing all the worst crimes imaginable.
Are these people really repentant of their sins and are now reforming under the direction of the new Jesuit Pope?

Heather Saul
Drugs were found inside a car belonging to a 91-year-old Vatican librarian
A cardinal makes his way to Vatican City Getty Images
Two men are being detained by French police after four kilos of cocaine and cannabis were discovered hidden inside an official Vatican car with diplomatic number plates.
French radio network RTL said the vehicle, which belonged to Argentinian cardinal Jorge Mejia, had gone to be serviced a few days before it was stopped. The retired 91-year-old Librarian emeritus is currently bed-ridden following a heart attack.
Two Italian men, aged 30 and 41, are believed to have picked up the car and driven it to Spain where they allegedly collected four kilos of cocaine and between 150 and 200 grams of cannabis.
The pair then reportedly drove back to France with the haul stashed in the car, apparently convinced the diplomatic license plates would protect them from being searched at the border.
However, customs officials stopped the car during a routine check as it traveled through Chambéry, near the border with Switzerland and Italy, on Sunday, where they discovered the illegal stockpile.
Police in Lyon have opened an investigation into the incident.
In a statement, the Holy See confirmed one of its vehicles was stopped by French customs officers with drugs on board but stressed that no staff were directly involved.
http://www.independent.co.uk/news/world/europe/cocaine-and-cannabis-haul-hidden-in-vatican-car-seized-by-french-police-9737148.html
No wonder they once called themselves High Priests.