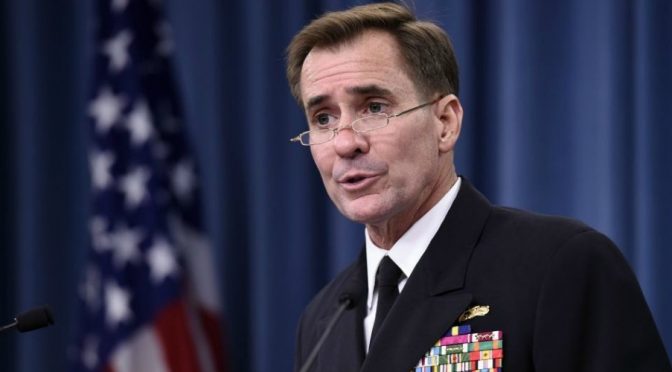 This is precisely Russia’s fault. The White House can’t take it anymore. Russia’s effective military intervention in Syria has effectively removed any sanity left at the White House.
At the time of this writing, 20 Daesh oil trucks were bombed by the Russians.

Russian Aviation sorties have not only opened a can of worms regarding a NATO member Turkey’s aiding and abetting Islamic State terrorists through supply of arms and ammunitions, and facilitating oil smuggling into European and Israel customers, but have also exposed beyond any doubt the culpability of the United States military itself in deliberately airdropping material support to known terrorist controlled areas and in prolonging the battle against all terrorist organizations worldwide for its own hegemonic agenda.
In its struggle to maintain relevance, the White House through its patriotic State Department spokesman, John Kirby, advertises its imagined accomplishments in the region in a form of a year-ender summary.

bySarah Lazare, staff writer
State Department spokesperson John Kirby is raising eyebrows after he released a recap of 2015 “success stories” in which he credits the United States for bringing “peace” and “security” to Syria and “stepping up” to help the country’s people at a difficult time.
“The United States and many members of the international community have stepped up to aid the Syrian people during their time of need,” wrote Kirby in his laudatory year-in-review released late last week. He went on to claim that “the United States has led the world in humanitarian aid contributions since the crisis began in 2011.”
“Led by Secretary Kerry, the United States also continues to push for a political transition in Syria, and under his stewardship, in December, the [United Nations] Security Council passed a U.S.-sponsored resolution that puts forward a roadmap that will facilitate a transition within Syria to a credible, inclusive, nonsectarian government that is responsive to the needs of the Syrian people,” the report continued.
Using the hashtag #2015in5words to highlight last year’s wins, Kirby boasted: “Bringing Peace, Security to Syria.”
Kirby’s claims of victory did not go unnoticed, with Foreign Policy reporter David Francis writing on Monday: “When it comes to Syria, ‘peace’ and ‘security’ might not be the best choice to describe what the United States delivered there in 2015.”
And indeed, a roundup of empirical evidence paints a far more bleak picture.
The United Nations Security Council reported in August that the Syrian conflict has now killed 250,000 people and displaced 12 million. According to a report released by the UN’s Relief and Works Agency in March, more than 80 percent of Syrians were living in poverty in 2014.
What’s more, despite the role of U.S. military intervention in fueling the rise of ISIS and conflict in Syria and Iraq, the American humanitarian response is severely lagging. The United States has admitted just 1,854 Syrian refugees since 2012, and according to the administration of President Barack Obama, 10,000 will be resettled next fiscal year.
This compares with 2.1 million Syrian refugees registered by the UN in Egypt, Iraq, Jordan, and Lebanon; 1.9 million Syrians registered by Turkey; and nearly 30,000 in North Africa. All of these numbers are likely low, as many refugees do not register.
Further, these numbers fall well below calls for the U.S. to resettle at least 100,000 Syrian refugees in the coming year, with some demanding open borders at a time of dramatic human displacement.
In addition, many have argued that U.S. aid donations are dismally inadequate, given the country’s status as the biggest economy in the world.
While aid falls short, U.S. intervention continues to escalate—despite warnings that there is no American military solution.
According to the calculations of journalist Chris Woods, November 2015 “saw the greatest number of Coalition actions yet reported in the 16-month war,” with the U.S. and allies conducting 232 bombings in Syria, as well as 529 in Iraq. And earlier this month, the United States announced it is deploying more special operations forces to Iraq, where they will be given license to operate unilaterally in neighboring Syria.
Meanwhile, a report released by Amnesty International earlier this month found that ISIS has formed a formidable arsenal, in part thanks to large stockpiles of U.S. weapons seized from Iraqi forces and Syrian opposition.
Kirby’s declaration of “success” in Syria was not, however, the only controversial claim in his annual roundup. Also included under the hashtag #2015in5words were “Protecting Arctic Climate and Communities” and “Open Door to Free Trade.”
http://www.commondreams.org/news/2015/12/29/come-again-state-department-claims-it-brought-peace-syria-2015
How can the US possibly win the war against terror when a…

A Kansas City mosque owned by an Islamic umbrella organization with deep ties to the U.S. arm of the Muslim Brotherhood has received millions of dollars in federal grants over the past several years, according to a federal spending database.
The Islamic Center of Greater Kansas City has received $2,739,891 from the Department of Agriculture since 2010, a Daily Caller analysis has found. The money largely went to the mosque’s Crescent Clinic to provide services through the Women, Infant and Children nutrition program, known as WIC.
The most recent federal payment — in the amount of $327,436 — was handed out Oct. 1.
Property records show the mosque is owned by the North American Islamic Trust (NAIT), which acts as a financial holding company for Islamic organizations. It offers sharia-compliant financial products to Muslim investors, operates Islamic schools and owns more than 300 other mosques throughout the U.S.
Founded in 1973 as an offshoot of the Muslim Brotherhood-backed Muslim Students Association, NAIT’s most controversial connection is to the 2007 and 2008 Holy Land Foundation terror financing cases. Along with other Muslim Brotherhood-linked organizations like the Islamic Society of North America (ISNA) and the Council on American-Islamic Relations (CAIR), NAIT was named a co-conspirator in the federal case but was not indicted.
At the Holy Land Foundation trial, evidence was presented that ISNA diverted funds from the accounts it held with NAIT to institutions linked to Hamas and to Mousa Abu Marzook, a senior Hamas leader.
Federal prosecutors introduced evidence in the case that “established that ISNA and NAIT were among those organizations created by the U.S.-Muslim Brotherhood.” Hundreds of thousands of dollars worth of checks drawn from ISNA’s account and deposited in the Holy Land Foundation’s account with NAIT were made payable to “the Palestinian Mujahadeen,” which is the original name for Hamas’ military wing.
While Hamas was designated as a foreign terrorist organization by the U.S. government in 1997 and is considered the Palestinian branch of the Muslim Brotherhood, the larger Muslim Brotherhood is not itself designated as a terrorist group.
And while the Obama administration has largely remained agnostic towards the organization, the British government released a scathing report earlier this month noting that the Muslim Brotherhood remains supportive of Hamas and that much of its ideology and many of its tactics “are contrary to our values and have been contrary to our national interests and our national security.”
http://dailycaller.com/2015/12/28/mosque-linked-to-muslim-brotherhood-has-received-millions-in-federal-grants/

6 thoughts on “It’s Official, White House Has Transferred to A Parallel Universe”