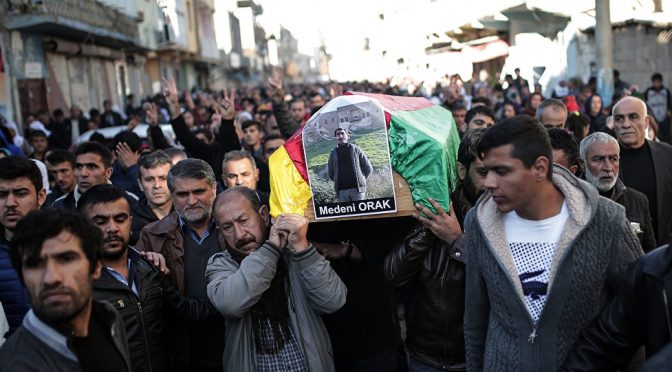 How many times do we have to see this same formula being played again and again where an erring government stimulate internal turmoil just to cover its own dirty tracks?

“Government forces have killed over 150 civilians and at least 200 Kurdish insurgents within the last week, according to human rights groups and local officials, cited by the New York Times. Amid escalating fighting across southeastern Turkey, hundreds of thousands of residents have abandoned their homes for safer regions.

“What people here in the west [of Turkey] do not realize is that we are one step away from a civil war,” Engin Gur, a resident of the Turkish South East who moved to Istanbul, told the New York Times.

The frozen conflict between state authorities and the Kurdistan Workers’ Party (PKK) reignited last July following the failure of a two-year ceasefire agreement.”

The global exposure of the Erdogan government’s involvement on the rise of the Islamic State suspended multilateral cooperation with other NATO states.

“Turkey’s regime not only smuggled guns into Syria, it used ‘state security’ as an excuse to imprison the journalists who reported it,” Dundar wrote.

“Turkish officers on the Syrian border have communicated with Islamic State militants in Iraq and Syria, Turkey’s Cumhuriyet daily reported, citing an investigation by the Ankara Chief Prosecutor’s office which allegedly eavesdropped on their phone calls.
The wiretapping reportedly took place last year as part of an investigation into six missing Turkish citizens, the Cumhuriyet reported. The relatives of those missing believed they might have joined the ranks of Islamic State (IS, formerly ISIS/ISIL) militants.”

Instead, both Germany and France are now openly cooperating with Russia as opposed to covertly prior to Turkey’s shooting down of one Russian Su-24. Both these NATO members are victims of Erdogan refugee flooding extortion…
“Erdogan’s renewed anti-Kurdish civil war predictably has not elicited even a peep from the EU – fresh from being extorted by the Sultan to the tune of 3 billion euros, which supposedly will be used to contain the refugee crisis unleashed by the Sultan himself when he decided to “release” the refugees from many a holding camp.
Yet this new civil war chapter offers a window of opportunity for a really serious power player – as Erdogan, foolishly, now fights on two fronts, internal (Kurds) and external (Moscow). Sooner or later Moscow’s support for the YPG Syrian Kurds may translate into decisive support for the PKK inside Turkey.
Everyone remembers when the YPG, four months ago, was on the verge of making a move towards Jarablus – the last town under the control of ISIS/ISIL/Daesh on the Turkish/Syrian border and an essential hub to resupply Raqqa, the capital of the fake “Caliphate”.
If the YPG conquered Jarablus, Raqqa would inevitably fall in no time. Thus Erdogan duly declared Jarablus a “red line”. Translation: PKK-linked Kurds would be fought to death by the Turkish Army.
Russian intel is carefully monitoring the chessboard, although Moscow has not yet made a move to unconditionally support the YPG-PKK — weaponizing included.
But hardcore action is in the cards. Russian Foreign Minister Sergei Lavrov met Selahattin Demirtas, the leader of the Peoples’ Democracy Party, Turkey’s top Kurdish political party, in Moscow.
Demirtas says he can do what the Sultan can’t; restore the Russia-Turkey relationship.
As much as this Turkey insider theme is open to contention, what matters mostly for Moscow is Syria; Russia insists the YPG must be at the negotiating table on the future of Syria as representatives of a legitimate opposition. Russia knows very well this may end up with a Kurdish autonomy scenario in northern Syria, which would imply freedom of movement for the PKK to cause trouble to Ankara.
It does not hurt, meanwhile, to keep a good relationship with the People’s Democracy Party in Turkey, which keeps its distance from the PKK although both parties share quite a few goals and key supporters.
Even ruling AKP members in Turkey have realized that Erdogan’s civil war strategy leads to a dead end. So they are suggesting Erdogan talks to the People’s Democracy Party as a way to further sideline the PKK politically.
That may be too little, too late; Demirtas has been stressing that autonomy is the way for the whole of Southeast Anatolia – in contrast to what is characterized as Ankara’s dictatorship.
So now Russia is able to add pressure against the Sultan on two separate fronts; support for autonomy in Anatolia, and support for a Syrian Kurd-controlled northern Syria.
http://sputniknews.com/columnists/20151224/1032265320/erdogan-sultan-civil-war.html
Wherever angle you look at, the Erdogan government is profiting handsomely from terror business, i.e. cheap oil and anti-refugee flooding aid, it is not about to stop. This government will fight for its own survival and ambitions, tooth and nail.

“Cumhuriyet daily Editor-In-Chief Can Dündar on Thursday highlighted in a defense statement made in court that his detention was based on spurious accusations and said President Recep Tayyip Erdoğan had already validated claims that weapon-filled trucks were sent to radical groups by saying on Wednesday, “So what if the trucks were filled with weapons?”.

Turkey will be in turmoil in 2016. That’s exactly what the rulers of the world really want, — a world constantly in chaos.

One thought on “Turkey on the Brink of Civil War”