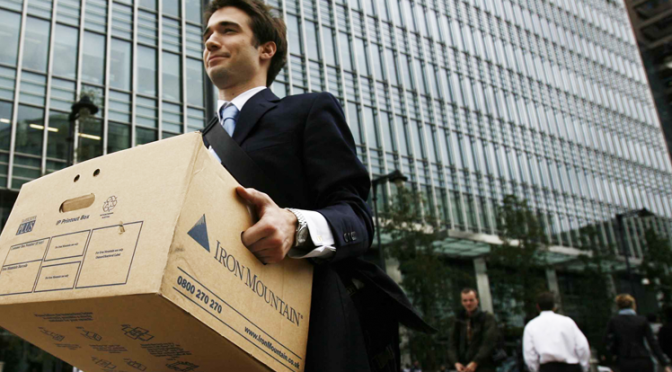 The fiat banking industry continues its downward spiral as manifested by its cost cutting measures including computerization and laying off of bank employees, but it doesn’t mean that the monster is already dead.

Aside from those mitigating measures, bank depositors are also being targeted just like what happened in Cyprus where deposits of certain threshold amount are being skimmed literally to feed and sustain the system of interest fraud and swindle.
The planned automation would also tie in nicely with the Bilderbergers planned technocratic dictatorship where paper based slavery [fiat currency] is replaced with virtual currency starting this year that could easily be erased from your account at will.
This would mean that the Khazarian Mafia still has the motivation to implement their globalist ambitions, although the BRICS are interfering on their capacity to do so at the moment.
China’s initial financial attack in 2007 that led to the West’s economic plunge a year later can still be felt until today.

“Wall Street banks are getting smaller.

Around the world, banks have been cutting down on their workforce in the face of new regulation and declining profits, the Wall Street Journal reported Friday.

Since 2010, the number of workers in the front office has fallen by 20 percent globally, according to a report from Coalition Ltd. These cuts are happening across the world’s largest investment banks. For the top ten banks, the number has fallen four percent since last year, a total loss of 2,100 workers.

This is the fourth consecutive year of a declining workforce on Wall Street, continuing a trend in which bankers and traders are no longer on top.

Among the disappearing are bankers, traders, salespeople, and analysts. Meanwhile, banks are stocking up in cybersecurity, IT, and compliance departments. “

Half a Million Bank Jobs Have Vanished Since 2008 Crisis: Chart

Yalman Onaran Yalman_Onaran, December 31, 2015 — 6:00 PM HKT
Staff reductions at some of the world’s biggest banks are far from over. Deutsche Bank AG, which has held employment close to its 2010 peak, plans to slash 26,000 positions by 2018, following a trend that began with the financial crisis. 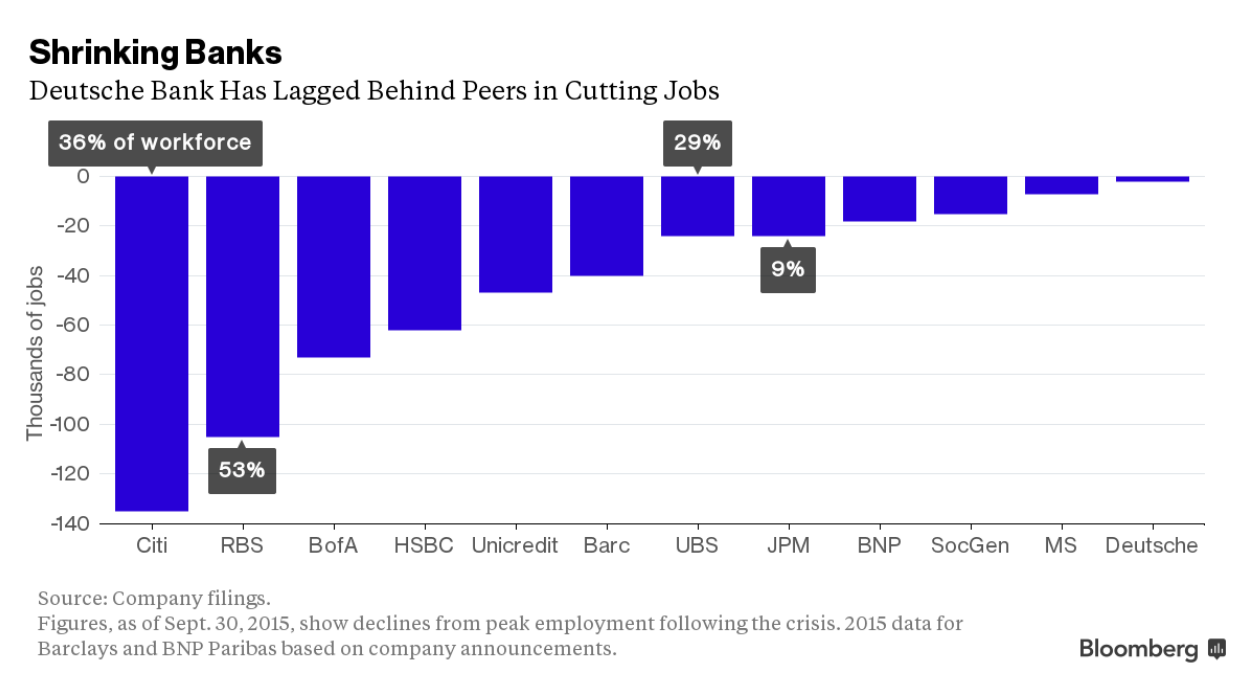 Announced cuts in the fourth quarter total at least 47,000, following 52,000 lost jobs in the first nine months of 2015. That would bring the aggregate figure since 2008 to about 600,000. UniCredit SpA says it will eliminate about 18,200 positions. Citigroup Inc., which has reduced its workforce by more than a third, plans to eliminate at least 2,000 more jobs next year.
http://www.bloomberg.com/news/articles/2015-12-31/half-a-million-bank-jobs-have-vanished-since-2008-crisis-chart
“U.S. Treasury yields are below where we thought they would be a year ago” as a decline in oil prices capped inflation, Francesco Garzarelli, Goldman Sachs’s co-head of macro and markets research in London, wrote in a report Wednesday. Higher policy rates in the U.S., a pickup in inflation and economic growth will propel yields higher in 2016, Garzarelli said.
An investor would lose about 3.2 percent if Goldman Sachs’s yield forecast proves to be accurate, data compiled by Bloomberg show. Goldman Sachs and JPMorgan are both primary dealers, the 22 firms that trade directly with the Fed and underwrite the U.S. debt.
Yields may “move up slowly,” said Tony Crescenzi, a market strategist at Pimco, which has $1.47 trillion in assets and manages the world’s biggest actively run bond fund. Ten-year yields will probably be in a range of about 2.25 percent to 2.75 percent, with the band rising from 2 percent to 2.50 percent, Crescenzi, who is based in Newport Beach, California, said in an interview with Bloomberg Wednesday.
http://www.bloomberg.com/news/articles/2015-12-31/biggest-investors-say-beware-the-bond-market-as-fed-tightens

Why I’m Closing My Bank Accounts While I Still Can Not long ago I walked into a local branch of my bank – the 13th largest bank in the United States based on consolidated banking assets, according to the Federal Deposit Insurance Corporation’s (FDIC) second-quarter 2015 data.
I wanted to cash a check for a few thousand dollars. It was a business check made out to cash; it was my business account and there was plenty of money in it.
What happened next was, frankly, frightening. And it has profound implications for every American.
That’s because it means capital controls, courtesy of the government and the U.S. Federal Reserve, could be right around the corner. They’re already in effect in some form.
That means you might not be able to get the money you want out of an ATM. You might not be able to cash a check when you have plenty of money in your account. Or worse… your bank could take your deposited cash and convert it to shares of stock in that bank.
In other words, if you think you’ll always be able to get your money out of your bank, you’re wrong.
Here’s what happened…
It Started Innocently Enough
When I went to cash the check, a routine activity that must happen millions of times every day in the United States, the woman behind the big, thick glass partition said, “I’m sorry. I can’t cash this for you.”
“Pardon me,” I said. “What do you mean you can’t cash that?”
She replied matter-of-factly, “I don’t know you.”
“You don’t know me because you’re new here,” I replied. “Please get the branch manager,” I requested politely.
“I’ll call her, but you’ll have to fill out this form,” she told me as she reached into a drawer under the counter.
Just then the branch manager came over to the teller inside the cage. “Hi Mr. Gilani, is there a problem?” she asked.
“Yes, there is a problem,” I replied. “I’m trying to cash a check and first this young lady said she didn’t know me and couldn’t cash the check, then she said I’d have to fill out some forms to get my money out. What’s going on?”
The manager told me there were some “new rules” they had to follow. She acknowledged she knew me, telling the teller I was okay, but told me I’d still have to fill out the form.
“I am not filling out any form ever to take my money out of my account,” I stated. “Is that a federal law or is that this bank’s idea of customer service?”
“It’s just what we have to do now,” the manager replied.
So I looked at her as if to say, “Really? You’re not going to tell me why I have to fill out a form to take cash out of my account?”
Then I said, very calmly, “I’m sorry – and I don’t want to be a jerk – but if you don’t cash this check or if I’m ever asked to fill out a form again when I cash a check, I’ll close all my accounts here.”
I got my cash… and a seriously creepy feeling.
No one has ever been able to tell me why the teller wouldn’t cash my check, not even my friends who own banks. The best answer I got was, it was a new teller and she probably didn’t understand the SARs rules and figured she’d better not cash the check, in case she got in trouble.
Which begs the question, what are SARs?
They are Suspicious Activity Reports. And according to the FDIC’s website…
“A bank shall file a suspicious activity report with the appropriate federal law enforcement agencies and the Department of the Treasury, in accordance with the form’s instructions, by sending a completed suspicious activity report to FinCEN (Financial Crimes Enforcement Network) in the following circumstances:

Banks fill out these reports regularly. They have to.
In fact, according to a post on the well-respected ZeroHedge.com site, “Banks have minimum quotas of SARs they need to fill out and submit to the federal government. If they don’t file enough SARs, they can be fined. They can lose their banking charter. And yes, bank executives and directors can even be imprisoned for noncompliance.”
As annoyed as I was with the difficulty of getting my money out of my account (and the teller no doubt filing a SAR on me), at least I was able to get my money.
But that can change.
There are two scenarios where depositors could either be restricted from withdrawing their cash or have their deposits confiscated and converted into bank stock shares.
http://moneymorning.com/2015/11/30/why-im-closing-my-bank-accounts-while-i-still-can/
What if they replace all bank branch managers, too, so that the new ones could say, “I don’t know you… “, so you can’t cash out your own check?
Will the massive lay-offs and system automaton be able to avert an impending fiat banking collapse?
Honestly, we don’t really think so, because that’s the whole idea of why the BRICS Alliance are establishing their own financial system.
A sizable number of Americans already know that the Internal Revenue Service is a private corporation based in Puerto Rico and its collection of income taxes is grossly unconstitutional, we are wondering what keeps them from paying taxes still.
It is our definite conclusion that the only measure that could finally slay the beast for good is the public’s non-participation to the whole fiat system charade by withdrawing their money while they can and invest on real estate, or other hard currencies.
This is the least they could do. Will these freedom loving people rise to the occasion this year?
The Swiss are already moving towards that direction…

Switzerland will hold a referendum to decide whether to ban commercial banks from creating money.
The Swiss federal government confirmed on Thursday that it would hold a plebiscite, after more than 110,000 people signed a petition calling for the central bank to be given sole power to create money in the financial system.
The campaign – led by the Swiss Sovereign Money movement and known as the Vollgeld initiative – is designed to limit financial speculation by requiring private banks to hold 100pc reserves against their deposits.  [The Telegraph]