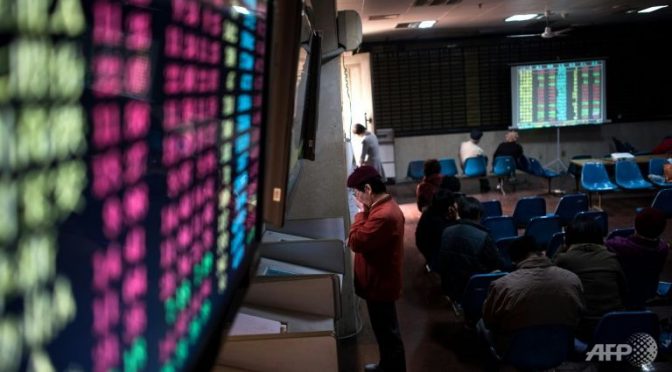 The global market can’t afford to buy Chinese goods anymore, and so the post-Christmas season is absolutely bleak for China based industries.
This fact and the inherent speculative character of the whole system provided the tsunami enough to plunge the Chinese stock market just a few hours from the opening bell today. 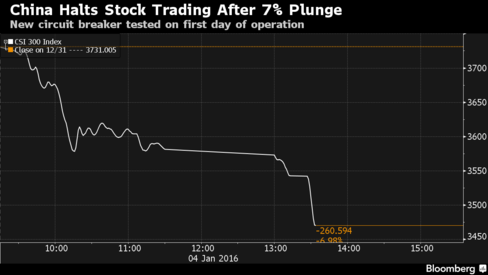 Late last year, China had already announced that it will intervene when this same scenario happens, i.e. they’ll pull the circuit breaker down once a certain downward trajectory threshold is reached.

“The worst-ever start to a year for Chinese shares triggered a trading halt in more than $7 trillion of equities, futures and options, putting the nation’s new market circuit breakers to the test on their first day.”

“Trading was halted at about 1:34 p.m. local time on Monday after the CSI 300 Index dropped 7 percent. An earlier 15-minute suspension at the 5 percent level failed to stop the retreat, with shares extending losses as soon as the market re-opened. Traders said the halts took effect as anticipated without any major technical problems.”

“… Under the circuit breaker rules finalized last month, a move of 5 percent in the CSI 300 triggers a 15-minute halt for stocks, options and index futures, while a move of 7 percent closes the market for the rest of the day. The CSI 300, comprised of large-capitalization companies listed in Shanghai and Shenzhen, fell as much as 7.02 percent before trading was suspended. The Shanghai Composite Index lost 6.9 percent.

Individual investors in China, who drive more than 80 percent of trading, may have rushed to sell after the first circuit breaker took effect to avoid getting stuck in positions by the 7 percent suspension, according to Andrew Sullivan, managing director for sales trading at Haitong International Securities Group in Hong Kong. It took just seven minutes for the second halt to come into effect as shares tumbled after the first suspension ended, according to data compiled by Bloomberg.”

Even with the best of all intentions, the present economic system is still not the best system there is. Stocks are traded multiple times with the help of automation, and all these senseless acrobatics have little to do with actual demand and production, but mostly on speculations.
Why does an entire economy suffer just because somebody speculated maliciously to his advantage? Why can’t we have an economy whereby all parameters are inherently stable?
We know what a population’s basic needs are. Certainly, we can forecast intelligently what is needed for the next day, next week, or in the next five years, or so. Why do we have to treat the economy as an unpredictable beast?
Why do we have to consider an economic disaster as if it’s by force majeure, and therefore, beyond our control?
If indeed the real world economy is beyond man’s control, why do we have a college industry?
Why can’t we have an economic system that forecast, allocates and distributes intelligently all basic resources adequately enough for every member of our society to live with integrity as a human being, and not close to a rat?
Scarcity?
There’s no scarcity in a single seed of corn that multiplies up to 600 seeds come harvest season, or “one bushel of corn contains about 90,000 kernels at typical harvest moistures” [here].
Every stock market everywhere will suffer the same fate over and over again. So why are we doing it still? Are we expecting that somehow the system will correct itself along the way?
We keep doing the same things over and over again, perpetually expecting different results. This is pure insanity.
We cannot expect that a corrupt system will, one of these days, assume an inkling to rectify its errors then transform itself to what has been desired.
Every stock market everywhere will suffer the same fate over and over again until these stubborn people finally surrender to the idea that the best economic system for this generation is one that embraces technological advancements as its basic tenet, and allows all basic resources to become available to everyone so that a truly equal an opportunity be provided.
Taxation and other economic principles should only be levied against luxury items. To put it simply, just tax the rich. Why?
All competitions are regulated except capitalism. Why is it that the free market is the only “free” in this system?
Is it because they control the whole market?
A decent environment for secured living breeds better, saner mindsets as opposed to a corrosive environment of flesh and drugs peddlers we have today.
But who are we to understand these things?
“Only the Illumined understands things. Understands who are expendables, such as the derelicts, the unfaithful, the treacherous and the kinds. However, the truth could never be disclose but one may only discover and/or realized setting aside its mind set. Even members of Fraternal Brotherhood Societies took time to such realization within ranking system.”

“Do you really think man will have sustained respect knowing what our Boss really is, a person who eats, sleeps and have human feelings just like us, and is in higher position? Enviousness is always there whether we know him or not.”

The monetary system of usury is at the heart of all these ills in our society and it is being sustained by a Society of Luciferians at the helm of global banking.
Sans Catholic propaganda, the insider’s interview below could have been more palatable. Still, we want to thank John for the link and for helping us elevate the level of discourse. The same gratitude goes to others, too.