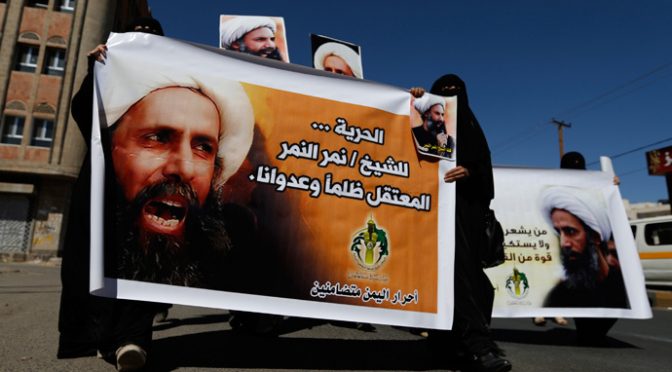 One thing we can be sure of is the two-faced foreign policies of Western nations will continue towards those who don’t participate in their delusional ambitions.
Yesterday, they might be sitting with you on the table partaking peaceful exchanges,

… only to turn away and strike you from the back on the today.

Afterwards, they would even have the gall to promote such acts as ““Bringing Peace, Security to Syria.”

This is the mainstay doctrine as far as the Khazarian parasites are concerned and all those who advertises first before they take the necessary actions to remove these culprits are themselves delusional, too.
Saudi’s worse than ISIS execution of Sheik al-Nimr is meant to draw Iran into a conflict so that the Western powers could send in ground troops into the Middle East, only this time, Iran will be the prime target.
What nuclear deal?
Recently, they are even accusing Iran to have fired a missile into a US aircraft carrier. These people could not stand other countries developing for their own security and economic independence.
The enemies are itching for more wars, the Sheeples are still hoping they can remove all of them through electoral exercise. 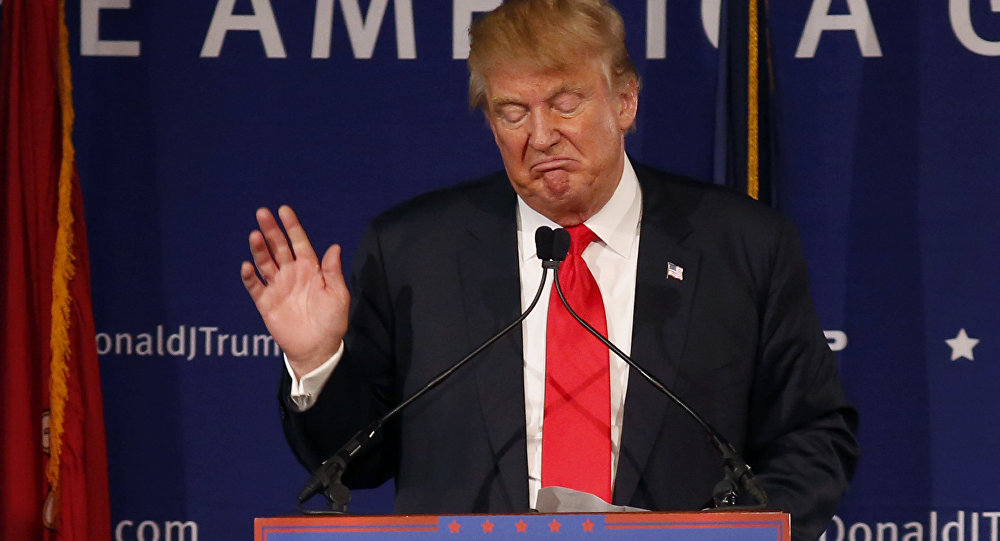 Catherine Shakdam
Set up as a modern Archduke Franz Ferdinand of Austria, Sheikh Nimr al-Nimr’s death needs to be seen as a harbinger of war – a ploy that would allow for an all-out war against the new Axis of Resistance against imperialism. Forget sectarianism!
Against all sense of apparent logic, and I would personally add, human decency, King Salman called on January 2 for the immediate execution of Sheikh Nimr al-Nimr, one of Saudi Arabia’s most beloved and respected clerics. A leading member of the Qatif Shiite community, Sheikh al-Nimr was more than just a voice for his community. Through his calls for social justice, fair political representation and civil liberties, this one man held a mirror to the ignominy which is Saudi Arabia’s absolute monarchy. And because he stood defiant before al-Saud royals’ threats of violent persecution, his courage became a rallying call for resistance, across both the kingdom and the Islamic world.

But not only that – al-Nimr offered a democratic vision all Saudis, and beyond, all Arabs could get on board with; a model which would have in essence united and bridged communities when only enmity and mistrust had reigned. Under his impetus, it is a united and free Arabia imperial powers would have had to contend with. And so his voice had to be silenced, and the future he offered had to be distorted to the tune of sectarian hatred and allegations of terrorism.
A teacher with boundless dignity and poise, Sheikh al-Nimr offered only words to fend off tyranny. And while Saudi Arabia took great pain in depicting him as a violent dissident, a man of the sword and rebellion, never did his lips carried vengeance or armed retaliation. Today, Riyadh thinks itself mighty, for its king continues to hold his subjects’ lives in the palm of his hands. As it were, the kingdom might soon learn that there is such blood which does not wash away, and such light which is not extinguishable…
No regime will ever be sustained on fear alone – popular legitimacy and popular will will always eventually prevail, however painful the process; for political slavery goes against our most innate yearning for freedom – such is our human condition. In that sense, Sheikh al-Nimr was a humanist.
And no, Sheikh Nimr al-Nimr is not another Shia cleric. He was not an Iranian agent plotting for the annexation of his land by the Islamic Republic – he merely stood next to those, who, like him, recognized people’s right to political self-determination, beyond dogmatism, sectarianism, nepotism and ethnocentrism.
His fight, his lifework, his teachings were not sectarian-motivated or sectarian-orientated – that is the lie Riyadh has sold the world to better rationalize its calls for more violence against a community it holds under siege by the barrel of a gun.

While several important figureheads, such as former Iraqi Prime Minister Nouri al-Maliki and Moqtada al-Sadr, a powerful Iraqi Shia cleric, have reduced Sheikh al-Nimr’s death to a sectarian spat, warning that Riyadh would soon feel the wrath of an entire people upon its neck, the matter far exceeds a simple religious dispute.
Sheikh al-Nimr’s death was plotted and carried out to fit into Saudi Arabia’s narrative of war against Iran – exploiting the one angle mainstream media have long held true – the infamous Sunni-Shia divide.
The harbinger of a violent smear campaign against the one regional power which still stands a stubborn thorn in al-Saud’s imperial thigh: Iran, the beheading of Sheikh al-Nimr was intended as a provocation against the Islamic world, a warning too, that Wahhabism would suffer no criticism and no challenge in its imperial pursuits.
At such a time when the veneer of political deceit is collapsing on itself, laying bare those neo-colonial ambitions Western powers and their regional allies have carried against the MENA, Riyadh is looking to accelerate its imperial takeover.
Let’s look at the bigger picture, shall we?
Riyadh knew all too well that al-Nimr’s death would prompt a global outcry. What it hopes now is that violence will break with such intensity, and theatrics, that its officials will soon be able to rationalize their calls for military actions. Make no mistake, with this one death, the kingdom is vying for global war – another conflict the US will only be too eager to indulge, another swipe at the Axis of Resistance, both Russia and Iran have spearheaded against ISIL.
It was Lee Smith, a senior fellow at the Hudson Institute and senior editor at The Weekly Standard, who argued in a lecture to the Middle East Forum that Iran poses a greater threat to the US than ISIL. It is this rhetoric the kingdom is playing into… There is an actual logic to the madness professed in Riyadh.
Smith said: “I think that by and large we have incorrectly prioritized our threat level here. I believe that the Islamic Republic of Iran is a much more serious serious threat to US regional interests and to US allies than the Islamic State is.
“Iran is the main issue and this is not just because of the nuclear weapons program but this is also because of Iran’s larger regional project.”
For all its talks of diplomacy, Washington is still looking to cut Iran down to size, and next in line stands the Great Russian Bear. Saudi Arabia of course is only too happy to oblige, offering a platform upon which to launch America’s new narrative of war.
One man’s life this January was claimed so that Riyadh could have its war with Iran – a war that the international community will easily justify as necessary in the name of regional stability. All the while, Wahhabi radicals have been offered free rein in the MENA, pillaging as they trample over people’s freedom – those armies you were told do not constitute an immediate threat.
I beg to differ.
But if al-Saud is carefully moving its pawns over the region’s grand chessboard, it is not fooling anyone.
Aware of the threat lying now at its door, Iran offered a measured response to Saudi Arabia’s open provocation, counterposing not the sword, but the rule of law to silence Riyadh’s barking.
On January 3, Grand Ayatollah Mousavi Ardebili issued a fatwa in which he strictly forbade and condemned violent retaliation. In an interview with Shafaqna, the cleric emphasized: “It is necessary that the protests by Muslims in all cases and especially in the case of the martyrdom of Hojjatol Islam Sheikh Nimr Baqer Al-Nimr be conducted in a way that will not give any excuse to the opponents and enemies, and God forbid to place them in higher position in the international public opinion.”
When Riyadh offered murder to entice further bloodletting, in view of castigating an entire faith, and thus legitimize its sick witch-hunt, Shia Islam offered peace, patience and quiet resistance.
Which is of the two will history remember as the tyrant: he, who held a bloodied blade, or the cleric who spoke words of emancipation?

Catherine Shakdam is a political analyst, writer and commentator for the Middle East with a special focus on radical movements and Yemen. A regular pundit on RT and other networks her work has appeared in major publications: MintPress, the Foreign Policy Journal, Mehr News and many others.Director of Programs at the Shafaqna Institute for Middle Eastern Studies, Catherine is also the co-founder of Veritas Consulting. She is the author of Arabia’s Rising – Under The Banner Of The First Imam
https://www.rt.com/op-edge/327811-saudi-arabia-nimr-cleric-iran/
This is not the first time that Saudi Arabia has violated human rights of its perceived political enemies. Yet, The United Nations even appointed Saudi as Head of the UN Commission of Human Rights instead.

Still, too many people naively think the United Nations, Inc. serves their interests.