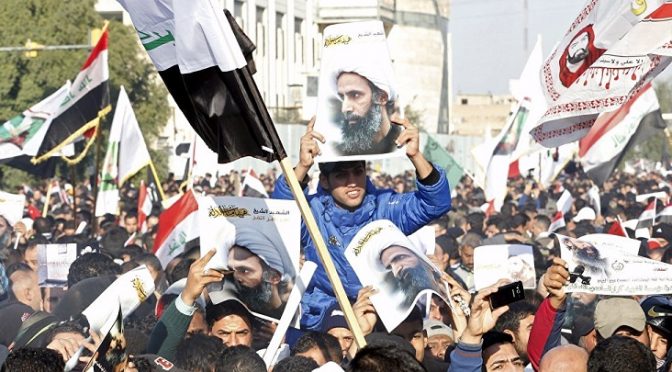 Even when there wasn’t enough evidence to prove that Russia illegal annex Crimea, Western governments imposed all manner of sanctions against the Russians, for reasons that it undermines democratic institutions.
Ironically, Ukraine under US control is neither democratic nor is it progressive, and so is Libya before it.

In fact, Ukraine has defaulted in its $3 billion sovereign debt to Russia effective December 31, 2015, and no Western countries has made any assurance that Ukraine will pay soon. In short, it’s all lip service and resource exploitation as far as US commitment to its target country is concern.
The absence of similar Western sanctions against Saudi’s unjustified provocation against the Shiite Muslim sector drives home the notion that Saudi’s action was with the permission of the West, primarily the United States and the UK, to sabotage the Iran Nuclear Deal and preserve UK’s oil and military interests in the region.
In fact, UK military experts are today helping Saudi forces operate and target Houthis in Yemen. And while the United States had already signed the nuclear accord with Iran it doesn’t mean that the latter can have unfettered post-sanction era of peace and prosperity while undermining the influence of the House of Saud within the region.
Iran needs to deal with the House of Saud soon, or it would lose the opportunity, i.e. in-fighting within the Saudi Monarchy.
“On Thursday, the second-in-command of Iran’s Revolutionary Guards warned the kingdom that its continued pursuit of sectarian policies will ultimately come back to harm Riyadh.
“The policies of the Saudi regime will have a domino effect and they will be buried under the avalanche they created,” said Brigadier General Hossein Salami, according to Fars news agency.
“If the Saudis do not correct their path, their regime will collapse in coming years.”
Salami also compared Riyadh’s policies to those of Saddam Hussein, prior to his ouster in the US-led invasion of Iraq.
“The path the Saudi regime is taking is like the one Saddam took in the 1980s and 90s. He started a war with Iran, executed prominent clerics and top officials, suppressed dissidents and ended up having that miserable fate.”
The general called Riyadh’s decision to sever diplomatic ties with Iran “irrational and hateful,” and added that the violence in both Iraq and Syria were “the results of Saudi’s sectarian policies in the region.”
Earlier this week, an analysis released by US-based political consultant firm Eurasia Group also agreed that the kingdom’s reckless actions stem from a kind of existential panic.
“Saudi Arabia is in serious trouble, and they know it,” Ian Bremmer, president of Eurasia Group, told Business Insider.
According to the analysis, “The Saudi Kingdom faces a growing risk of destabilizing discord within the royal family this year, and its increasingly isolated status will lead it to act more aggressively across the Middle East this year.”
While there are many factors contributing to Riyadh’s identity crisis, the most significant may be the Iran nuclear deal.”
http://sputniknews.com/middleeast/20160107/1032815387/saudi-domino-effect.html