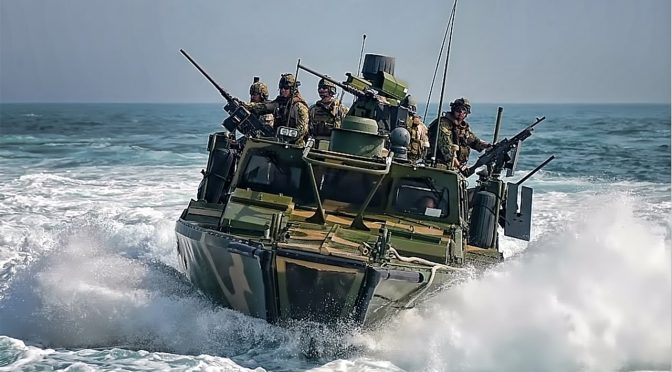 “Circumstances surrounding how the Navy boats entered Iranian waters continue to unfold. US officials initially said a mechanical problem caused one of the vessels to drift toward Farsi Island, but that theory was proven false after the boats were driven back to Bahrain on Wednesday morning.

In an interview with Jorge Ramos on Thursday, US Defense Secretary Ashton Carter said the Pentagon now believes a navigational error was at fault.

“[The sailors] obviously had mis-navigated. That’s what they report. That’s how they believe they ended up in this circumstance,” he said.”

Mis-navigated?
Or, baited?
Again, two highly advanced gunboats were involved and for their navigation systems to fail all at the same time is just absolutely preposterous. Not to mention that all their crews just suffered a collective amnesia as to where exactly is Bahrain, or Kuwait.

Depending on the mission, the Riverine Commmand Boat can bristle with weapons from six different mounts. It has a remote-controlled weapon mount for a .50-caliber machine gun — or other weapon — on a mast behind the cockpit. It will also have a twin weapon mount on the bow that is controlled from the cockpit, as well as four mounts for crew-served weapons elsewhere on the boat. The mounts include electrical power supply to allow the use of mini-guns.
These boats are so capable, they are being used in multiple countries around the world:

“Already in use with navies around the world, the CB90 originally was a product of the Swedish boatmaker Dockstavarvet. SAFE Boats, based in Washington state, bought the licenses required to build the same boat for the Navy. There are more than 240 in use around the world, from Malaysia to Greece.

“The Mexican navy has about 60 of them. Brazil has a bunch, the Swedish navy, Norway,” company spokesman Bryan Wood said. “The [U.S.] Navy expressed an interest, but because it was built in Sweden, they couldn’t buy it.”

Now the Navy can.

.. The RCB is designed for maximum adaptability. It has an airy, aircraft-style cockpit with two operator seats and a middle jump seat that swings into and out of place. It has a head just below the cockpit divided by a passageway that leads to a bow ramp, so troops can be put ashore quickly.

The bow and hull are heavily reinforced so operators can run the boat up on a rocky stretch of beach to disembark riders without worry, Wood said.

“There are not many environments it can’t pull into and away from,” he said. “That’s one of the things the Navy found desirable, that it’s capable and proven.”

It’s either the armed crew were on a specific military mission, or their navigation systems were deliberately manipulated to give them false readings to bait them, for the Iranian to launch defensive maneuvers that would trigger a bigger war.
Is this the reason why John McCain is fuming mad?
Is he mad because the recent covert mission he may have authored, in collaboration with his Middle East buddies, to provoke a war with Iran and sabotage the recently passed US-Iran nuclear accord that would help bring peace to the world, ended in another humiliating failure?

On Tuesday, two small US Navy patrol boats lost contact with their command and drifted into Iranian waters in the Persian Gulf. Running aground on Farsi Island, the 10 crew members onboard the two boats were taken into custody by the Revolutionary Guard, and their boats were seized.
Many expressed concern that the incident could become a protracted diplomatic battle, but all crewmembers and equipment were released the following day after discussions between US Secretary of State John Kerry and his Iranian counterpart Mohammad Javad Zarif.
While the incident’s quick resolution is undeniably good news, US Senator John McCain, chairman of the Senate Armed Forces Committee, believes the American sailors should not have been taken into custody in the first place.
“The Administration is pretending as if nothing out of the ordinary has occurred. Vice President Joe Biden described the incident as ‘standard nautical practice.’ That assertion is patently false,” McCain said in a statement.
“What’s worse, by failing to affirm basic principles of international law, it places our Navy and Coast Guard vessels and the men and women who sail them at increased risk in the future.”
Democrats have argued that the swift return of the sailors was the direct result of the improved relations between Washington and Tehran after the summer nuclear deal negotiations. McCain refuted the claims.
“Furthermore, the suggestion by House Minority Leader Nancy Pelosi and others that the Iranian nuclear deal somehow aided in these sailors’ return is ludicrous,” he said, according to Breaking Defense, a military commentary website.
“These sailors were ‘arrested’ in apparent violation of international law and centuries of maritime custom and tradition.”
Republicans have insinuated that the Americans were mistreated while in Iranian custody, though video released by Tehran shows the sailors being treated to a full meal and comfortable accommodation.
“All indications suggest that our sailors were well taken care of, provided with blankets and food and assisted with their return to the fleet,” Secretary Kerry told reporters on Wednesday.
Circumstances surrounding how the Navy boats entered Iranian waters continue to unfold. US officials initially said a mechanical problem caused one of the vessels to drift toward Farsi Island, but that theory was proven false after the boats were driven back to Bahrain on Wednesday morning.
In an interview with Jorge Ramos on Thursday, US Defense Secretary Ashton Carter said the Pentagon now believes a navigational error was at fault.
“[The sailors] obviously had mis-navigated. That’s what they report. That’s how they believe they ended up in this circumstance,” he said.
After releasing the sailors, Iran’s Revolutionary Guard posted an online statement reading, “After determining that their entry into Iran’s territorial waters was not intentional and their apology, the detained American sailors were released in international waters.”
http://sputniknews.com/us/20160115/1033162707/mccain-persian-gulf-incident-outrage.html
Turkey’s provocation against Russia is still fresh in everyone’s mind and indeed Covert World War 3 is still ongoing.
So, as much as we don’t want to entertain the idea, but we will be witnessing more of these dangerous attempts to start a bigger nuclear exchange until some groups decide to assume responsibility of arresting the likes of Sen. John McCain.
Certainly, there are enough evidence to send these mass murderers to the gallows.